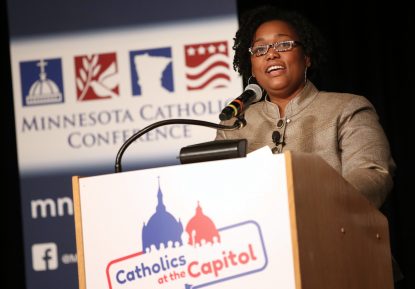 Gloria Purvis is seen in this 2017 file photo. Purvis was among the speakers in a Jan. 27, 2021, webinar sponsored by Fordham University on “Pro-Life, Pro-Choice, Post-Roe? New Prospects for the Abortion Debate in America.” (CNS photo/Dave Hrbacek, The Catholic Spirit)

RYE, N.Y. (CNS) — Overturning Roe v. Wade will not be the silver bullet many in the pro-life movement have hoped for. Even if the Supreme Court delivers a symbolic repudiation of its 1973 ruling, abortion will continue with state oversight and passions will run high on the extremes of the debate, according to speakers on a Jan. 27 webinar.

Nonetheless, a resolution to the highly polarized discussion about abortion in the United States might include calm conversations seeking common ground, positioning pro-life efforts as part of increased advocacy for human dignity and looking closely at policy changes that support pregnancy and motherhood.

Statistics oversimplify attitudes toward abortion and labels such as “pro-choice” and “pro-life” are not helpful, said Tricia Bruce, a sociologist of religion and an affiliate of the University of Notre Dame’s Center for the Study of Religion and Society.

“So much of the abortion conversation goes beyond abortion,” Bruce said, and includes social issues and consideration of individual circumstances and personal experience with abortion, miscarriage, infertility and adoption.

“The moral discomfort with abortion is far wider than the desire to restrict abortion legally. Many Americans don’t want abortion rates to increase, but there is a reticence to use the law to decrease abortion,” she said.

The alignment of former President Donald Trump with the pro-life movement invites charges of hypocrisy in the cause, she said, because despite his support for abortion restrictions, Trump enacted a political vision that disregarded human dignity at most turns — at a tremendous cost to Christian witness, she added.

“The political lens has eclipsed every other lens for addressing abortion rates,” including economic, feminist, spiritual and relational lenses, she said.

“As a Catholic, it’s disappointing to see the pro-life cause emptied of the Gospel and made political,” said Gloria Purvis, Catholic radio host and media commentator. “It’s alienating to hear you’re close to heaven in one party and you’re going to hell if you’re in the other.” 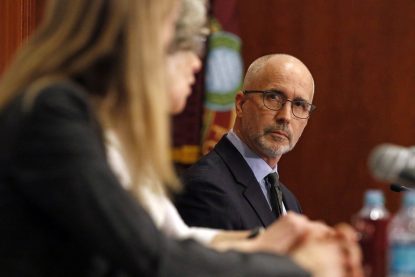 David Gibson, director of Fordham University’s Center on Religion and Culture, is seen in this March 26, 2019, file photo. (CNS photo/Gregory A. Shemitz)

“We need to wrest abortion from being a political issue and make it what it truly is: a Gospel issue rooted in the dignity of the human person from womb to tomb,” she said.

Beaty said, “The stalemate of the current culture wars leaves little room to imagine a ‘Third Way’ solution to the entrenched political binary.” However, a third way of listening and finding common ground could result in unlikely friendships, creativity and hope, she said.

“Now is the time to take the pro-life movement beyond the culture wars and reinvest in the lives of women and children. Pro-life is not about beating our political enemies but about loving our flesh and blood neighbors,” Beaty said.

Purvis said the national dialogue on abortion often overlooks what steps could be taken to make a welcoming place in society for women who are pregnant or who have children. Businesses should not stigmatize pregnant employees or mothers, but should shift to accommodate all people in an economy where they can be full participants.

Mary Ziegler, professor of law at Florida State University, said Americans are “profoundly ambivalent, conflicted and nuanced” about abortion. At a time where people divide themselves into political silos, conversation with different people can reveal common ground.

“Abortion is not a cookie-cutter issue,” she said.

“Conversation exposes a lot of people who are not on the extremes,” she said. “Conversations are important and create space for people to talk in ways that are risky and unconventional but ultimately productive,” she said.

Bruce said religion is a powerful carrier of messaging around abortion, but the influence of the Catholic Church on young Catholics has waned, as it has in some other religious groups.

Purvis said Catholics can look for common ground with people who have different approaches to abortion by seeking the things they both value. “We can’t demonize those who have a different view,” she said.

For example, she said maternal child health should be a “no-brainer” for Catholics and is an area where diverse groups can advocate together.

She said some women at maternity homes and pregnancy centers “don’t have a crisis pregnancy, they have a crisis life. We have to be there with them as family. We don’t give up on making abortion unthinkable but we have to make choosing pregnancy desirable in all ways,” she said.

The webinar, “Pro-Life, Pro-Choice, Post-Roe? New Prospects for the Abortion Debate in America” was presented by the Fordham Center on Religion and Culture.