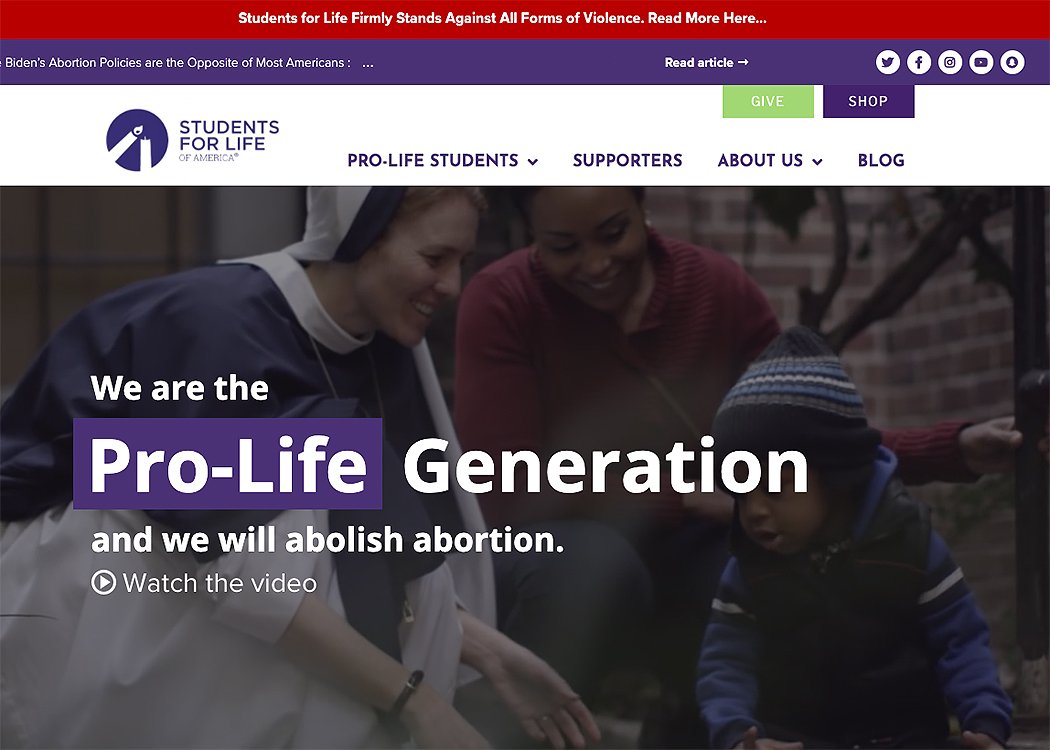 This is a screen grab of the Students for Life of America website. (CNS screen grab)

WASHINGTON (CNS) — Ever since Vice President Mike Pence, at the 2017 March for Life rally, announced, “Life is winning again in America,” the pro-life movement’s association with the Trump administration grew stronger.

White House counselor Kellyanne Conway, at that same rally, emphasized: “Allow me to make it very clear — we hear you, we see you, we respect you and we look forward to working with you.”

“Unborn children have never had a stronger defender in the White House,” President Donald Trump said at last year’s March for Life rally on the National Mall. “And as the Bible tells us, each person is wonderfully made.”

His administration delivered on those promises. Trump, a few days after his inauguration, had restored the so-called “Mexico City policy,” which prohibited nongovernmental organizations that get U.S. funding from promoting abortion as family planning overseas.

Later in his term, his administration stopped those receiving Title X family planning funds from providing or referring patients for abortion, except in cases of rape, incest or medical emergency. This led to the Planned Parenthood Federation leaving the federal program rather than comply.

Then came Trump’s appointees to the Supreme Court — Neil Gorsuch, Brett Kavanaugh and Amy Coney Barrett, all of whom have shown support for the pro-life viewpoint.

On Jan. 28, as predicted, the Biden administration reversed the Mexico City policy and asked federal agencies to review the Title X ruling.

But also this year political pro-life voices are returning to the grassroots, including many who are becoming prominent for the first time, and sometimes are considerably heartfelt. They include those who have spoken at state-level marches as well as at the virtual Stand4Life conference Jan. 27 sponsored by Students for Life of America.

“We need to be that voice for the voiceless, for those preborn children who need our voices and need us to defend them,” said freshman Rep. Michelle Fischbach, a Republican Catholic from Minnesota, at the conference.

The Biden administration knows “there is a pro-life majority out there that’s going to continue to speak up and spread the word and spread the education about the unborn child,” she said.

Iowa state Rep. Jeff Shipley, who often talks of his Catholic faith, discussed his efforts to amend the Iowa Constitution to state that there’s no constitutional right to abortion.

“Politics aside, what we really need to do is address this issue at its roots,” he added. “There’s no such thing as safe sex. There never has been, there never will be. When we talk about sex, we really need to be exploring concepts such as love and devotion.”

Others are praying for President Joe Biden to have a change of heart on abortion.

A fellow Catholic, Nebraska Gov. Pete Ricketts, a member of the Knights of Columbus, said at a Nebraska Walk for Life event Jan. 16, a week before the new president’s inauguration: “We need a prayer for conversion of President-elect Biden to change his heart and remember his Catholic roots and remember the unborn and not go about the policy changes that he’s promised to do.”

Other times, the remarks have been deeply personal. Minnesota Rep. Pete Stauber in 2014 famously swapped zucchettos with Pope Francis in St. Peter’s Square. On Jan. 22, at a march in Brainerd, Minnesota, he talked about his son Isaac, born with Down syndrome, and the decision he and his wife, Jodi, made not to terminate the pregnancy.

“The baby deserves the opportunity to breathe the fresh air, see the sunsets, see the sunrise. (Go) fishing, dancing. They deserve the right. And it’s our responsibility to do that.”

“With the change of the political landscape, that battle is only going to get steeper,” said U.S. Sen. Mike Lee, R-Utah, at the Students for Life of America event. “We’re not just against abortion. We’re for women and children, born and unborn.”

Lee called for “bending the arc of history toward life.”

“Just because we lost the election in November, there are more fights to be had,” said Tina Whittington, Students for Life’s executive vice president. She said of political opponents, “They not only want us to lose, they want us to lose hard.”

Lobbying members of Congress requires patience and a willingness to learn, Tom McClusky, president of March for Life Action, advised in a webinar: “Anger doesn’t get you listened to. Civility does.”