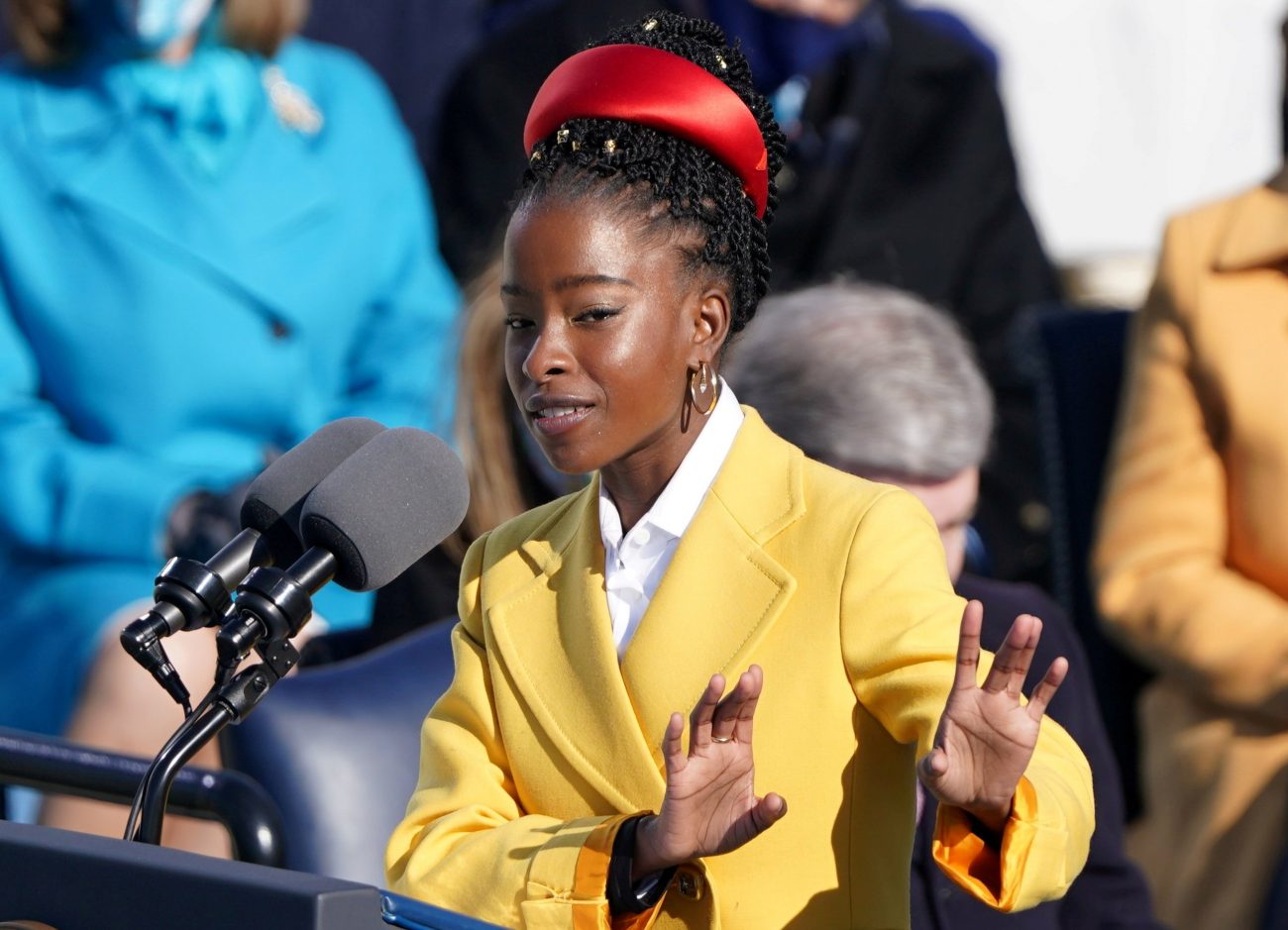 Amanda Gorman recites a poem at the U.S. Capitol Jan. 20, 2021, during the inauguration of Joe Biden as the 46th president of the United States. She is a parishioner at St. Brigid Catholic Church in Los Angeles. (CNS photo/Kevin Lamarque, Reuters)

WASHINGTON (CNS) — Long before she burst into the public spotlight delivering her inauguration poem, Amanda Gorman got a standing ovation from fellow parishioners of St. Brigid Church in Los Angeles for reciting a poem she wrote about the parish.

And on Jan. 20, at the inauguration ceremony of President Joe Biden, parishioners watching this young woman on their TV screens — addressing political leaders and the nation at large about courageously rebuilding the country — applauded her all the more.

Floy Hawkins, former director of religious education at the parish for over 20 years, said her phone did not stop ringing after the inauguration, with friends asking if she saw, heard or knew about Gorman’s role.

“You see her? Look at that little girl!” fellow parishioners were saying because as Hawkins put it: “We still see her in a very endearing way.”

There also were plenty of Facebook and Instagram posts about this, but Hawkins said her generation doesn’t use social media as much, though they’re fine with texting.

And even though they were thrilled for Gorman, parishioners of the historically Black church didn’t see her performance as a “solo act,” because Gorman has always been at the parish with her twin sister, Gabrielle, and her mom. Hawkins felt that sense of family when cameras followed Gorman joining her mother when she finished her delivery.

St. Brigid’s pastor, Josephite Father Kenneth Keke, also didn’t just see Gorman in that moment but felt she represented the entire parish in South Central Los Angeles — which is predominantly African American but now also has a growing number of Latinos, Filipinos and white parishioners too.

It’s also the pride of all.

“Parishioners are very much proud of her,” the priest, from Nigeria, told Catholic News Service Jan. 22, adding that he personally knew she would go far. “She is a very, very intelligent young lady. The first time I saw her, I knew that one day she was going to be very important.”

Hawkins recorded that part of the inauguration and plans to watch it again. She told CNS that when she saw Gorman approach the podium and begin speaking, she was “in awe … to see such a young African American female be at such a pinnacle point of the world.” She also said it humbled her “from a spiritual perspective of God’s graces and mercies,” since she knew the national youth poet laureate from Gorman’s middle school days.

As adolescents, Gorman and her sister, went through a two-year training program at the parish and then received the sacraments of baptism, first Communion and confirmation on the same day.

When she graduated from high school to attend Harvard University in Cambridge, Massachusetts, Gorman received a scholarship donation from the parish. The pastor said she always returned to the church when she visited home.

In recent months, he hasn’t seen Gorman, who graduated last year, but he also hasn’t seen many of his parishioners due to coronavirus Mass restrictions.

Hawkins, in her role at the parish which numbered 750 families prior to the pandemic, was impressed by the Gorman sisters from the start, saying they were brilliant intellectually and socially with quiet but confident personalities.

She also remembered Amanda’s speech impairment that caused difficulty in saying certain letters, which the poet has overcome and spoken about. Hawkins once overhead a student asking Amanda why she talked the way she did, and Amanda replied that it was just her East Coast accent.

“I was so happy when I learned she had acknowledged publicly that she had a speech impediment, what a release for her,” Hawkins said.

Gorman, who had been writing and developing her own style since she was a young girl, was named the Youth Poet Laureate of Los Angeles at 16, and it was around that time she wrote the St. Brigid’s poem that she recited at the end of a Mass commemorating the Rev. Martin Luther King Jr. The parish assistant choir director, knowing of Gorman’s work, had asked her to consider doing it.

That Gorman stepped up to the plate, then and now, is something Hawkins admires. When she saw her on the Capitol stage in her yellow coat and red headband, she knew Gorman had taken “ownership of the opportunity.”

“Sometimes people ask you to do something and you say: ‘Oh, I don’t know if I could do it,'” she said.

“I don’t get the sense that was her response when the first lady invited her to speak at the inauguration,” Hawkins added. “I believe she immediately said yes, as we are encouraged to say: ‘Yes Lord.'”

Hawkins prayed for Gorman before the poet introduced herself to the country as the “skinny Black girl, descended from slaves and raised by a single mother” who can “dream of becoming president only to find herself reciting for one.”

But as she listened to the 22-year-old’s strong, clear voice she said to herself: “Glory be to God. … Look what you have done in the world!” And she felt the strong connection too — that the poet’s description of finding light in dark times was something the people of St. Brigid’s knew all too well.

What a time for our Catholic faith and our African American culture, she thought.

She also was pleased that Gorman, named the National Youth Poet Laureate in 2017, “didn’t minimize or dismiss” the insurrection at the Capitol just two weeks before but spoke of not losing hope when terrible things happen.

Her poem, “The Hill We Climb,” speaks in part of a country “bruised but whole, benevolent but bold, fierce and free” and adds: “We will not be turned around or interrupted by intimidation.”

Father Keke said the poem reflected “what we preach here at St. Brigid’s” about liberation and redemption, which he said also is emphasized in the parish’s music and art. Her words on unity had a strong spiritual connection, the priest added.

The parish is planning to celebrate Gorman’s achievement in some small way soon and in a bigger way once COVID-19 restrictions are lifted.

And the country at large is already celebrating her. Just hours after the inauguration, Gorman’s books jumped to the top of best-seller lists.

“She is definitely a light, an inspiration to us all,” said Hawkins, who said the current buzz around Gorman simply validates who she is and will take her further than she ever imagined. She also has no doubt Gorman will continue to courageously move forward, but not alone.

“She takes God with her,” she said.

NEXT: Nine Catholics nominated to Cabinet-level jobs in Biden administration