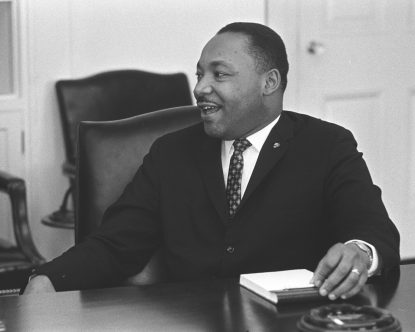 The Rev. Martin Luther King Jr. smiles during a talk with U.S. President Lyndon B. Johnson, not pictured, in this undated photo. Pope Francis paid tribute to the activist’s vision in a message to a conference organized by the Rev. Bernice King, youngest daughter of the slain civil rights leader. (CNS photo/Yoichi Okamoto, courtesy LBJ Library)

ATLANTA (CNS) — With “social injustice, division and conflict” threatening the common good, people need to rediscover and recommit to the vision of the Rev. Martin Luther King Jr. to work nonviolently for harmony and equality for all, Pope Francis said.

“Each one of us is called to be an artisan of peace by uniting and not dividing, by extinguishing hatred and not holding on to it, by opening paths of dialogue,” the pope, quoting his encyclical on global fraternity, said in his message to the Jan. 18 “Beloved Community Summit.”

The summit was an online event marking the King holiday and promoting his vision of a community where differences are resolved through dialogue and where people work together to perfect equality and to end injustice.

The pope’s letter was sent to the Rev. Bernice King, daughter of the slain civil rights leader and CEO of the King Center in Atlanta.

Her father wrote frequently about the urgency of forming the “beloved community.” He insisted that nonviolent protest was not the goal, but simply the necessary means of building a just and equal society and where reconciliation and redemption can thrive. 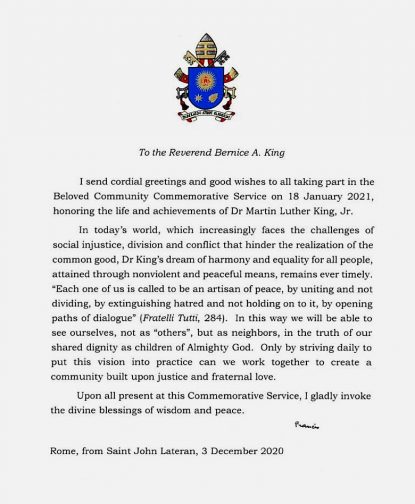 Pope Francis paid tribute to the vision of the Rev. Martin Luther King Jr. in this message to a conference organized by the Rev. Bernice King, the youngest daughter of the slain civil rights activist. (CNS screenshot/http://publogix.com)

“In today’s world, which increasingly faces the challenges of social injustice, division and conflict that hinder the realization of the common good, Dr. King’s vision of harmony and equality for all people, attained through nonviolent and peaceful means, remains ever timely,” the pope wrote.

What is essential, he said, is to see each other as neighbors “in the truth of our share dignity as children of Almighty God.”

“Only by striving daily to put this vision into practice can we work together to create a community built upon justice and fraternal love,” Pope Francis wrote, praying for “divine blessings of wisdom and peace” upon all the summit participants.