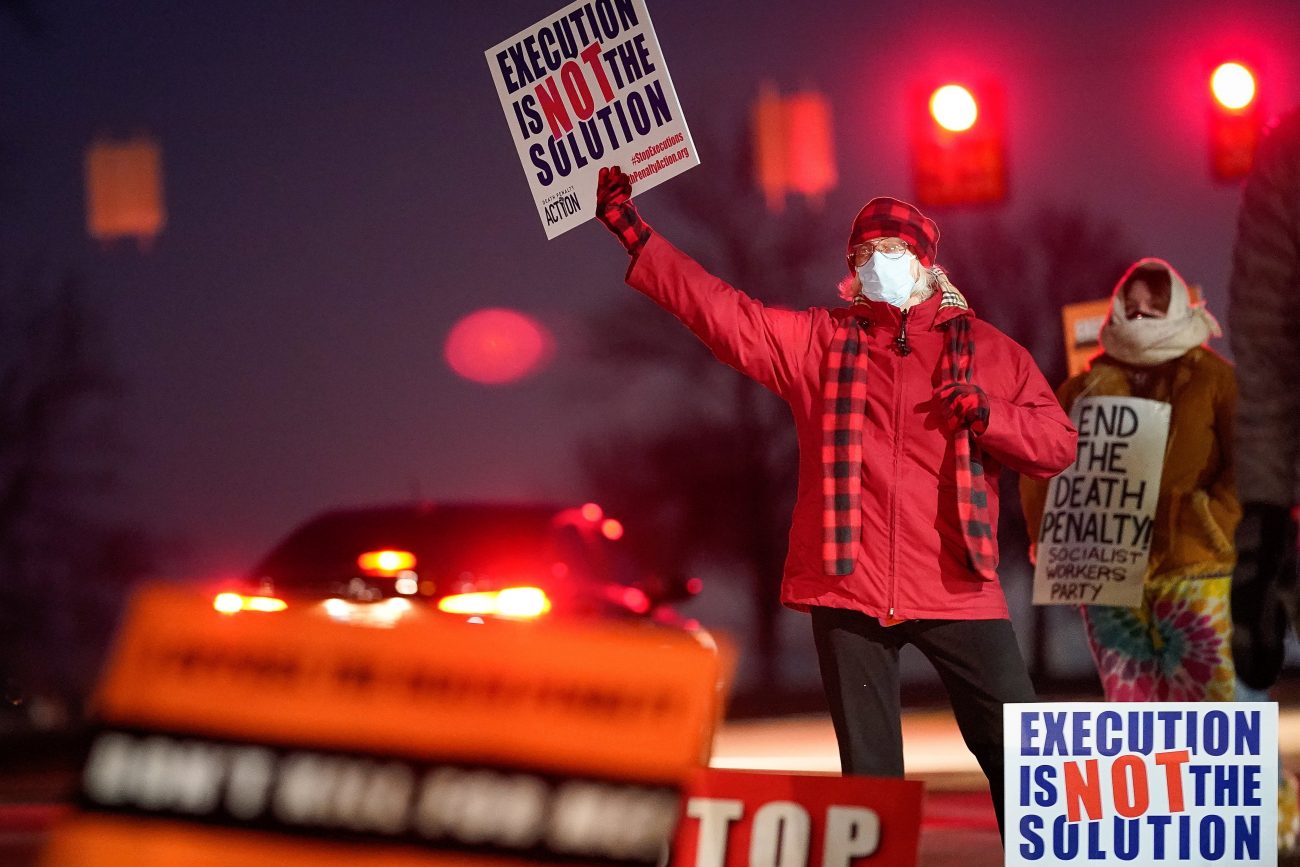 WASHINGTON (CNS) — Although the Supreme Court cleared the way for the execution of Dustin Higgs Jan. 15, two justices made their objections known loud and clear in dissents that called into question the speed of these decisions and even the constitutionality of capital punishment.

Hours after the court’s 6-3 ruling, Higgs was pronounced dead at 1:23 a.m. (EST) Jan. 16 at the federal prison in Terre Haute, Indiana. His was the 13th federal execution since last summer.

Justice Sonia Sotomayor’s scathing dissent of the court’s decision began by listing the names of those who had recently been executed by the federal government. She said those executed “during this endeavor deserved more from this court.”

And regarding the court’s often last-minute actions in these cases. she said: “There can be no justice on the fly in matters of life and death.”

Sotomayor said that since federal executions resumed, the Supreme Court has “repeatedly sidestepped its usual deliberative processes, often at the government’s request, allowing it to push forward with an unprecedented, breakneck timetable of executions.”

She said there were critical issues that needed to be examined and “the stakes were simply too high.”

The Catholic justice, nominated by President Barack Obama in 2009, said the “court has allowed the United States to execute 13 people in six months under a statutory scheme and regulatory protocol” without adequate scrutiny or resolving the serious claims raised by the inmates.

“This is not justice,” she added.

Sister Helen Prejean, a Sister of St. Joseph of Medaille and longtime death penalty opponent, tweeted that Sotomayor’s dissent “will be remembered long into the future as one of the most thorough, resounding indictments of this administration’s reckless, immoral, illegal effort to execute as many people as possible, as quickly as possible.”

Justices Stephen Breyer and Elena Kagan also dissented, and Breyer, who has been vocal against the death penalty before, echoed his previously raised concerns that many of these cases are rushed through the court.

“None of these legal questions is frivolous,” he said of the appeals that came before the high court. He also said the “hurry up, hurry up” process “is no solution” because it takes a long time to fully consider the complex legal questions that are raised.

Breyer also wrote about the “psychological suffering” inflicted on death-row inmates and said the many legal questions in individual cases call “into question the constitutionality of the death penalty itself.”

Higgs’ execution had been blocked by lower-court orders involving the legality of the federal government carrying out the execution in accordance with Indiana law since Higgs was convicted in Maryland.

The government had appealed this stay of execution and the majority of the Supreme Court sided with it. The court also reversed the decision by a federal district judge who said he did not have the authority to allow Higgs’ execution to go forward.

“I did not order the murders,” he added. Higgs was convicted of ordering the 1996 murders of three women on land owned by the federal Patuxent Wildlife Research Center in Maryland. The man convicted of shooting the women received a life sentence.

Shawn Nolan, Higgs’ attorney, said in a statement: “There was no reason to kill him, particularly during the pandemic and when he, himself, was sick. Shame on all of those involved and all of those who have looked the other way.”

In their letter, they said: “Alternative sentences, such as life without parole, are punishments through which society can be kept safe. The death penalty does not create a path to justice. Rather, it contributes to the growing disrespect for human life and perpetuates a cycle of violence in our society.”

Higgs was the third federal execution to take place in four days, during the last weeks of the Trump administration.

After it was announced that his execution would take place, Catholic Mobilizing Network tweeted: “The final federal execution under the Trump administration is moving forward. #DustinHiggs is a child of God and his life is sacred. The death penalty is wrong, this execution is wrong. God have mercy.”

In another tweet it said: “The federal execution of #DustinHiggs, like all executions in the U.S., will be done in our name, paid for by our tax dollars. As followers of Christ, we cry out against this injustice.”

The group has been encouraging Catholics to sign a petition, found here– https://bit.ly/3p2EkDU — urging the incoming Biden administration to prioritize putting an end to the death penalty.

Sister Prejean similarly urged people to continue advocating against capital punishment, tweeting: “A lot of people have become involved in the anti-death penalty movement over the past year. Don’t let the Trump administration’s killing spree dim the fire within you. We are closer than ever before to abolishing the federal death penalty. Many states will follow suit.”