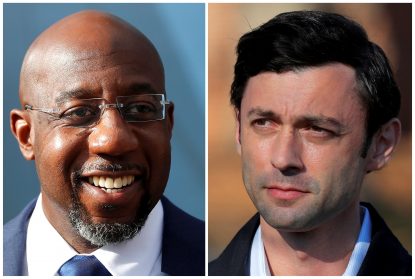 WASHINGTON (CNS) — The wins by Jon Ossoff and the Rev. Raphael Warnock, both Democrats, in the Jan. 5 U.S. Senate runoff elections in Georgia will give Democrats the White House and both houses of Congress.

But precisely how that will play out is far less clear, noted three professors at different Catholic universities in Washington.

Joe Biden’s Electoral College win and popular vote over incumbent Republican President Donald Trump was the most clear-cut, despite two months of baseless complaints by Trump and his allies claiming the election was rigged. But Democrats’ advantage in the House dwindled by double digits to their current 11-seat advantage, 222-211, with two vacancies.

And while the Democrats picked up seats in the Senate, it took the Ossoff and Rev. Warnock wins for the party just to reach a 50-50 split with the GOP — which includes two independents who caucus with the Democrats. Vice President-elect Kamala Harris, in her role as Senate president, can cast a 51st vote in case of party-line splits on bills.

“Here and now, I think it means a lot, even though people would discount that in terms of saying, ‘Well, you’re still going to have the filibuster. You’re still in all likelihood going to need 60 votes to pass legislation,'” said John K. White, professor of politics at The Catholic University of America.

“I think (soon-to-be-ex-Senate Majority Leader Mitch) McConnell has been particularly difficult to make things move forward. Other leaders have not been as resistant to having things reach the floor. The speaker is always doing what they think the caucus wants him to do. The Democrats want to see things get voted on that the Republicans don’t want to see voted on,” Noel said.

But there will be “more power-sharing in general” due to the 50-50 split between the parties — the first time that’s happened since 2001, he added.

James Stocker, assistant professor of international affairs and director of the Trinity Global Leadership Initiative at Trinity Washington University, pointed to a wild card of across-the-aisle comity. “A big unknown factor is the attack on the Capitol” Jan. 6, he said.

The rampage following a pro-Trump rally earlier that day saw senators from both parties being hustled away to secure locations by overwhelmed security details. “It had a unifying effect. That has the potential to have some interparty cooperation in the first month of the new administration,” Stocker said. “But it’s not certain how likely it will last.”

How that plays out in terms of the Senate going along with the agenda Biden laid out during the campaign remains to be seen.

White said voters want to see bipartisanship. “The kind of behavior that the (Republican) Party exhibited — the outright opposition to anything that Barack Obama  proposed — is not what voters want right now. It cost the party in Georgia significantly in the suburbs.”

He added, “Voters do want to see results” on such issues as the coronavirus pandemic, the economy, rural broadband, education and climate. “I think it has more impact than making McConnell the minority leader and (Sen. Chuck) Schumer (D-New York) the majority leader,” White said.

“There will still be obstruction on things,” Noel said, so the prospects, for example, of the District of Columbia becoming the 51st state are small.

He added that there will be “a number of issues where moderate Republicans will work with Democrats and you’ll have Democrats willing to bring those to the floor,” although Noel did not specify any issue.

He said many speculate that Sen. Joe Manchin, (D-West Virginia), could be a thorn in his party’s side, as he wants to maintain the filibuster and leans moderate to conservative on many issues. “But that’s true only to the extent that there are no swing Republicans,” naming Mitt Romney of Utah and Susan Collins of Maine as two who “could make up for a Manchin or some other moderate defection.”

Obama had “all sorts of issues that he wanted to make progress on, but he faced the challenge of the economic collapse,” Stocker said, adding the economy Biden inherits is stronger than the one Obama was bequeathed.

But a $2,000 stimulus check — dangled by Trump as his justification for balking at singing the $900 billion coronavirus relief package in December — now has a better chance at passage. “There may be some support for that in the Republican Party,” Stocker said. “We’ll just have to wait and see.”

NEXT: Two Catholic members of Congress reflect on Capitol attack, work ahead