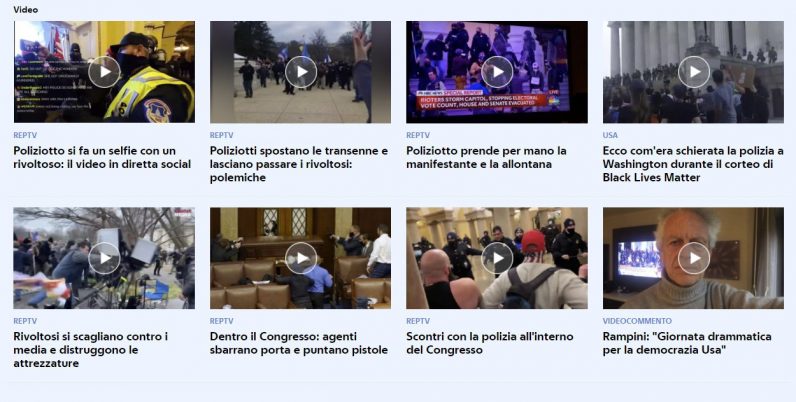 All eight videos on the homepage of the website of the Italian daily newspaper, La Repubblica, on Jan. 7, 2021, cover the previous day’s storming of the U.S. Capitol by supporters of U.S. President Donald Trump. (CNS photo)

ROME (CNS) — The breach of the U.S. Capitol Jan. 6 sent shock waves around the world.

As Archbishop Mark Coleridge of Brisbane, president of the Australian bishops’ conference tweeted: “I didn’t realize just how much the integrity of and respect for the democratic institutions of the U.S. matter to the rest of the world until this pandemonium erupted in D.C. From the other side of the world, I find myself shaken and disbelieving.”

“Washington: Democracy wounded” read the large headline on the front page of the Vatican newspaper, L’Osservatore Romano, Jan. 7. In smaller type, it explained that Congress reconvened to certify the presidential election of Joe Biden “after the violent assault committed by supporters of Trump and during which four people died.”

Under the headline, “A fragile good,” the newspaper’s assistant director, Giuseppe Fiorentino, wrote that the assault on the Capitol shows that “politics cannot ignore individual responsibility, especially on the part of the person who is in power and is able — through a polarizing narrative — to mobilize thousands of people. ‘He who sows the wind reaps the storm’ and at this point it is easy to tie the events in Washington to the accusations of fraud launched by Trump after the voting Nov. 3, accusations that never found objective confirmation.”

But the key lesson, Fiorentino wrote, is what Joe Biden said when he addressed the nation during the siege: “Democracy is a fragile commodity that must always be defended, even in countries, just like the United States, where democracy itself seems a largely acquired commodity.”

“The first step in defending democracy lies in accepting its rules,” he wrote, especially the rule of a peaceful transfer of power.

“Democracy under siege” read the banner headline on the front page of Avvenire, the daily newspaper owned by the Italian bishops’ conference.

In a video commentary, Andrea Lavazza, the paper’s editor-in-chief, said that whether outgoing President Donald Trump stays in office until the Jan. 20 inauguration of Joe Biden or is subjected to a “lightning impeachment,” the United States will have to grapple with “the heavy, negative heritage Donald Trump will leave behind. He has poisoned the wells of democracy, calling into doubt the results of an election that absolutely does not appear to have been compromised by fraud or conspiracies.”

Vatican News described what occurred as an “assault on Congress.”

Carlos Herrera, a famous morning show host on COPE, the radio network owned by the Spanish bishops’ conference, told his listeners Jan. 7 that he had “to chronicle the unheard of.”

“Who would have thought that one would speak of a violent assault on the U.S. Capitol to try to prevent the ratification of the winner of the presidential election in that country?” he said, calling the breach of the building and the deaths and injuries there “a grotesque end to the era of Donald Trump.”

At the World Council of Churches in Geneva, Romanian Orthodox Father Ioan Sauca, interim general secretary, issued a statement Jan. 6 saying, “The divisive populist politics of recent years have unleashed forces that threaten the foundations of democracy in the United States and — to the extent that it represents an example to other countries — in the wider world.”

“These developments have implications far beyond domestic American politics and are of serious international concern,” he said.

Father Sauca prayed that “the churches of America be empowered with wisdom and strength to provide leadership through this crisis, and on the path of peace, reconciliation and justice.”

In England, the violence at the Capitol also was the focus Jan. 7 of the popular early morning BBC Radio 4 program, “Thought for the Day,” which is described as “reflections from a faith perspective on issues and people in the news.”

Anglican Bishop Nicholas Baines of Leeds began his segment saying, “To be surprised by events in Washington is to ignore the fragility of democracy. If COVID has taught us that both human life and a stable economy are vulnerable, then the incited mob attack on the Capitol must reinforce the vital need for democracy, the rule of law and the peaceful transition of power to be treasured at all times.”

“The ancient wisdom of the Hebrew Scriptures dig deeply into the cry for justice, generosity, peace and the common good,” he said. “The prophets weep over how easily people can be seduced by words of strength or power or security that in the end undermine that very security itself.”

Bishop Baines also remarked on how many of the protesters were carrying signs proclaiming their faith in Jesus.

In Christianity, “strength and power have been powerfully reinterpreted in the scandal of a man on a cross. Not a man with a gun,” he said. The story of Jesus “challenges me to re-imagine what power looks like when colored by love and mercy rather than entitlement and fear.” 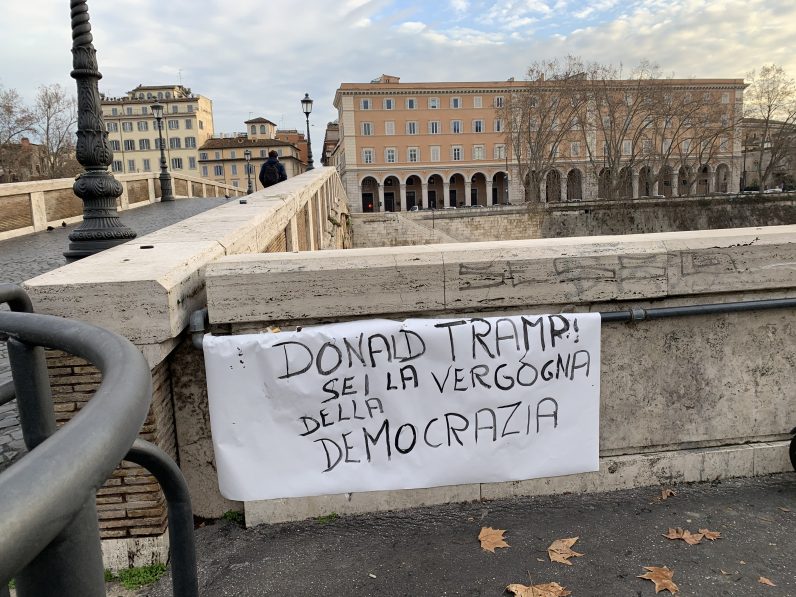 A sign in Italian reads, “Donald Tramp, you are an embarrassment to democracy,” near the Ponte Sisto bridge in Rome Jan. 7, 2021. (CNS photo/Cindy Wooden)

NEXT: COVID-19 claims lives of over 200 priests in Italy since start of pandemic