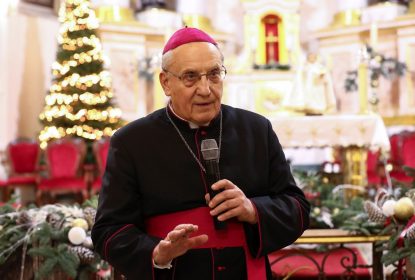 Archbishop Tadeusz Kondrusiewicz of Minsk, Belarus, speaks to reporters at his cathedral after returning to Minsk Dec. 24, 2020. The archbishop has pledged to remain active in national life, after formally handing over administration of the archdiocese to a temporary successor following his return from regime-imposed exile. (CNS photo/Reuters)

(CNS) — Belarus’ Catholic archbishop pledged to remain active in national life after handing over administration of the Archdiocese of Minsk-Mohilev to a temporary successor.

In a Mass at the Minsk cathedral Jan. 24, Archbishop Tadeusz Kondrusiewicz handed over the archdiocese to Bishop Kazimierz Wielikosielc, an auxiliary bishop of Pinsk who will serve as apostolic administrator of Minsk.

Archbishop Kondrusiewicz’s resignation was announced on his 75th birthday, Jan. 3, 10 days after his return from forced exile in neighboring Poland, following negotiations between Vatican diplomats and the government of President Alexander Lukashenko.

The archbishop spent four months in exile; the government blocked his return after he criticized election results that showed Lukashenko was the winner.

Under canon law, a bishop must submit his resignation when he turns 75, but the pope does not have to accept it. The unusual nature of his immediate retirement led some to believe it was part of the agreement to allow his return to Belarus.

“Although his ministry will now be purely pastoral, he will be remaining active,” Father Yuri Sanko, church spokesman, told Catholic News Service Jan. 25.

Archbishop Kondrusiewicz noted that Belarus was “going through an unprecedented social and political crisis,” but said in such times, Catholics must turn to prayer.

“The church stands and acts, and the gates of hell will never prevail against it,” he said.

“If we wish to save our country, we must follow the call of Jesus by believing in the Gospels and seeking conversion,” Archbishop Kondrusiewicz told the Mass, which was screened live by the church’s news agency, Catholic.By. “Each of us, with our entire nation, needs the conversion to which the Divine Word summons us.”

While Archbishop Kondrusiewicz was exiled, Catholic leaders were outspoken supporters of transparency in the election. In September, Belarus state radio suspended broadcasts of Sunday Mass. At one point, two Catholic priests were detained by police.

In mid-November, the Belarusian government issued a written warning to Minsk Auxiliary Bishop Yury Kasabutski, who was running the archdiocese during the forced exile of Archbishop Kondrusiewicz.

In a Nov. 24 social media post, Bishop Kasabutski warned criminal charges were being drafted against him over recent public statements, while preparations were also underway to arrest other Catholic priests.

Father Sanko told CNS there had been “no suggestion” of any government concessions to the Belarus church, adding that he had no information about any “concrete changes or improvements” following Archbishop Kondrusiewicz’s retirement.

Father Sanko said the handover Mass had been marked by a “family atmosphere, with people weeping and applauding.” He said most Catholics understood Archbishop Kondrusiewicz’s successor would “make some changes.”

“After 13 years of active church leadership, when most problems and challenges had to be dealt with personally by the archbishop, there’s obviously some sadness and regret he’ll now be in retirement,” the priest told CNS.

NEXT: Love is clearest sign of faith, pope says in homily for Christian unity