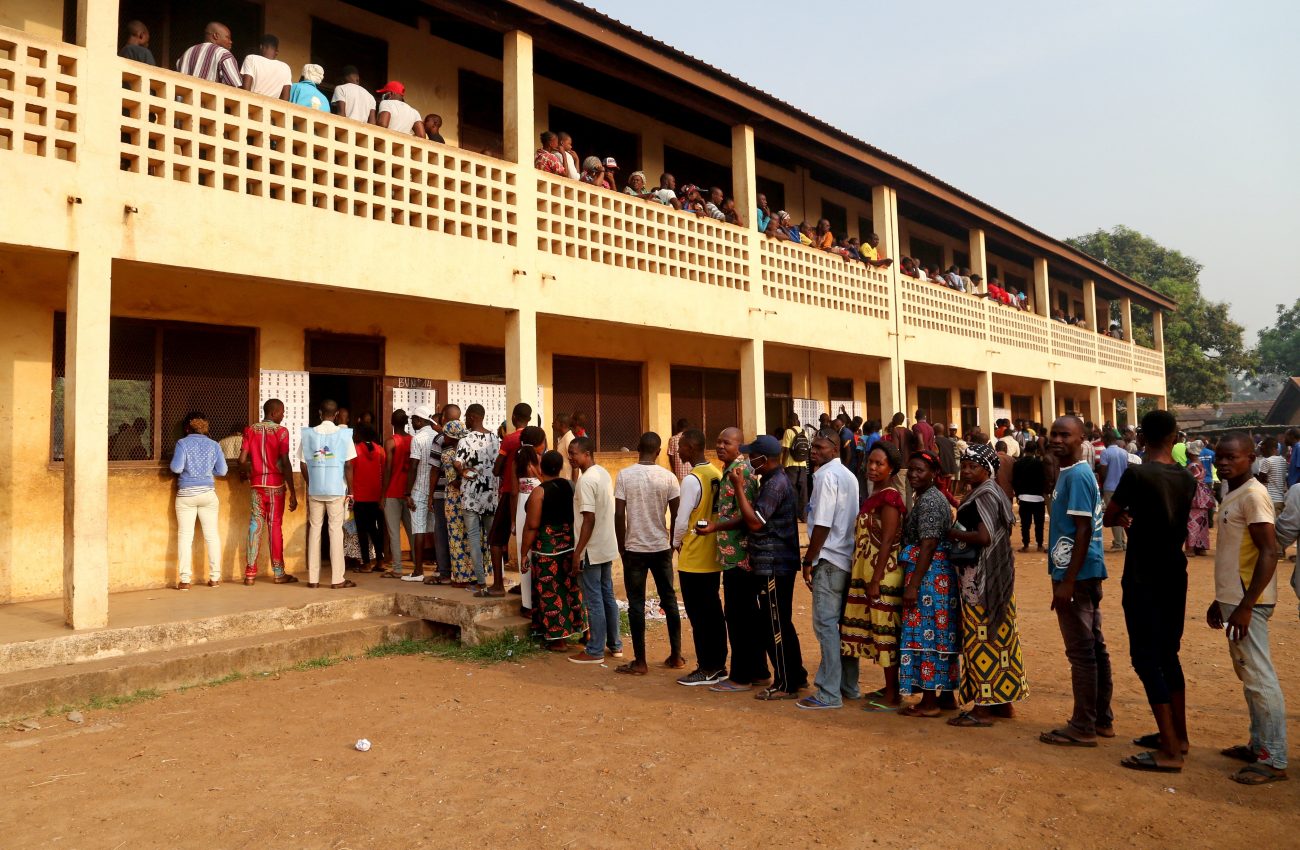 Voters stand in line to cast their ballots during the national elections at a polling station in Bangui, Central African Republic, Dec. 27, 2020. Catholic bishops in the country are warning of increased violence, food shortages and displaced people as two-thirds of the country was in rebel control in early January. (CNS photo/Antonie Rolland, Reuters)

Bishop Nestor-Désiré Nongo-Aziagbia, the bishops’ conference president, said the main supply route from Cameroon was occupied, causing shortages and surging prices. He also said people were being displaced from their homes as they sought shelter and took precautions.

He said people were “living in fear and anxiety,” adding that the conflict risked “turning into a nationwide hunt for innocent people, based solely on their ethnicity or political affiliation.”

“Our country faces a turbulent time, with intensified armed clashes between a rebel coalition and the Central African armed forces,” he told the French Catholic daily La Croix Jan. 6.

The same day, after praying the Angelus, Pope Francis told his virtual viewers, “I’m following with attention and concern events in Central African Republic, where elections were recently held and people expressed their desire to continue on the path to peace. Therefore, I invite all sides to a fraternal and respectful dialogue, to reject hatred and avoid all forms for violence.”

Presidential and parliamentary elections took place Dec. 27, despite an upsurge in rebel attacks by a newly formed Coalition of Patriots for Change, believed loyal to former President François Bozizé, who was ousted in 2013 and barred from running.

The National Elections Authority said Jan. 4 the presidential ballot had been won by incumbent Faustin-Archange Touadéra, with over 53%, making a February runoff unnecessary. However, opposition groups cited irregularities in the elections, for which half of voters were unable to register because of militia violence.

Meanwhile, the Catholic bishop of Bangassou, 470 miles east of the capital, said government forces had fled the town after running out of ammunition, “leaving us alone, with God remaining silent at our sides.” He urged prayers for survivors.

“I fear the aggressiveness of the mercenaries, who are looking for natural resources and wealth,” Spanish-born Bishop Juan-José Aguirre Muñoz told Fides, the Vatican’s missionary news agency, Jan. 4.

“Many innocent children have been hit by stray bullets while trying to flee to the Congo to escape the violence. You look them in the eye, and they know nothing about rebels, mercenaries or struggles for power. They only hear gunshots and explosions, and they are very frightened.”

The capture of Bangassou, a diamond-mining town of 35,000, leaves two-thirds of Central African Republic in rebel hands.

Radio Ndele Luka reported Jan. 6 some civilians had drowned while attempting to cross the Mbomou River to escape “intense fighting” for two national army bases. It said others had sought shelter at the city’s central mosque and St. Peter Claver Catholic Cathedral, as pillaging and vandalism continued.