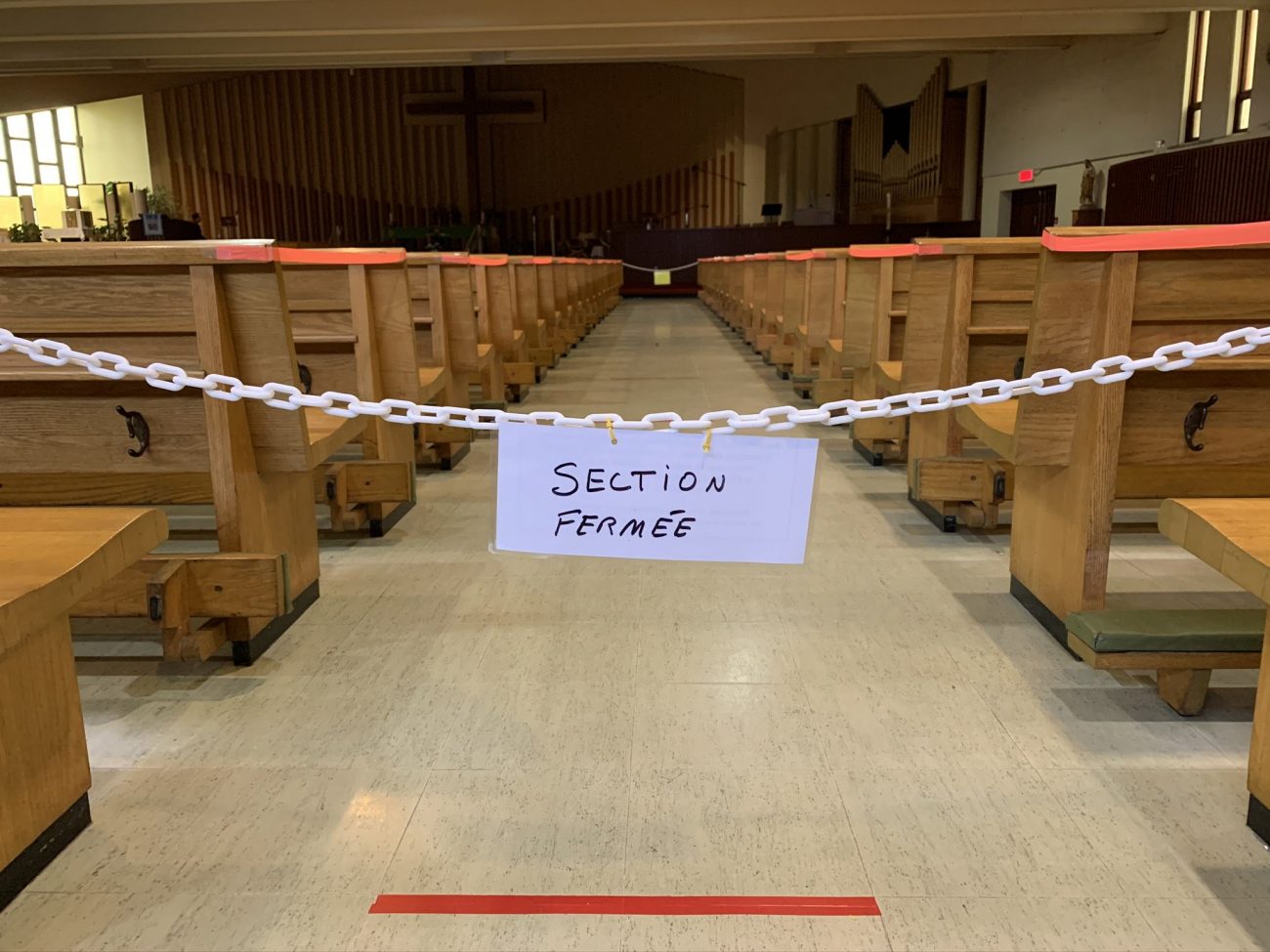 A sign reads "closed section" at St.-Benoît-Abbé's church in Quebec City Oct. 17, 2020, during the COVID-19 pandemic. The Quebec government announced Jan. 6 that places of worship will be completely closed from Jan. 9 to Feb. 8, 2021, during the pandemic. (CNS photo/Philippe Vaillancourt, Presence)

Churches and all places of worship are once again closing in the province of Quebec in an effort to stop the second wave of the COVID-19 pandemic. This decision is part of a new series of containment measures announced by Premier Francois Legault Jan. 6.

Places of worship will be closed from Jan. 9 to Feb. 8. Only funerals will be authorized, but limited to 10 people.

In British Columbia, public health officials extended bans on events and gatherings, including worship services, until Feb. 5. The current restrictions imposed in the province were first introduced Nov. 19 and have been extended for the second time.

In Ontario, worship services face a cap of 10 participants, which has led to the suspension of Sunday and weekday Masses in many areas. Schools in that province have been closed to in-person learning until Jan. 25.

In Alberta, churches have been told to limit in-person participation to 15% of fire code occupancy.

The government of Quebec announced stricter rules Jan. 6, including a curfew from 8 p.m. to 5 a.m.

“It’s urgent to reduce contacts between Quebecers,” said Legault, asking citizens to leave their homes only when absolutely necessary. “We are in a race against time and, right now, the virus is going faster than us.

During his news conference, Legault mentioned some “problems” with places of worship but did not go into details, simply saying they’ll also be closed — along with many other public places, including nonessential stores — for at least a month.

A group linking religious leaders of the major religious groups in Quebec to better communicate with the government had no comment on the new restrictions.

From March to June, places of worship were closed. Last summer, they were allowed to reopen with a limit of 250 people. When the second wave started at the end of summer, many regions of Quebec turned “red,” according to the government’s color-coded system evaluating the gravity the pandemic, thus prompting authorities to limit churches, synagogues, mosques and other places of worship to a maximum of 25 people, regardless of their size.

During the spring and summer, religious leaders — including Cardinal Gerald Lacroix of Quebec — criticized the government for its treatment of places of worship, claiming that they had been treated unfavorably compared to other sectors of activity.

Imam Hassan Guillet said that although he understood the government decision, “I am still saddened by this announcement.”

“In this health crisis, the priority for both politicians and spiritual leaders is the protection of human life and public health. So I understand the objective very well and I support the government’s decision,” he added.

Still, he would like the government to recognize that “places of worship are part of the solution.”

“There’s a lot of focus on physical health, and that’s normal. But there is also mental health,” he said. “When people face difficulties, they look to a person or a place for comfort. I find that it’s in our places of worship that they find the serenity they need to get through a difficult time.”

In a news conference in Vancouver Jan. 7, Dr. Bonnie Henry, provincial health officer for British Columbia, said “the vast majority of people in British Columbians are doing the right thing” by following public health orders, but an increase in case numbers showed “some people made the decision to make an exception for themselves” over the winter holidays.

“This is our riskiest time right now. We cannot let our guard down,” she said.

Other currently banned activities include indoor group high-intensity exercise, wedding or funeral receptions, and all social gatherings with people outside one’s own household.

There have been no COVID-19 outbreaks tied to churches in the Archdiocese of Vancouver, and critics have said the government has yet to give a meaningful explanation why worship services have been banned while shopping and dining out remain acceptable activities.

PREVIOUS: COVID-19 claims lives of over 200 priests in Italy since start of pandemic