French archbishop, others protest proposal to rein in religious extremism 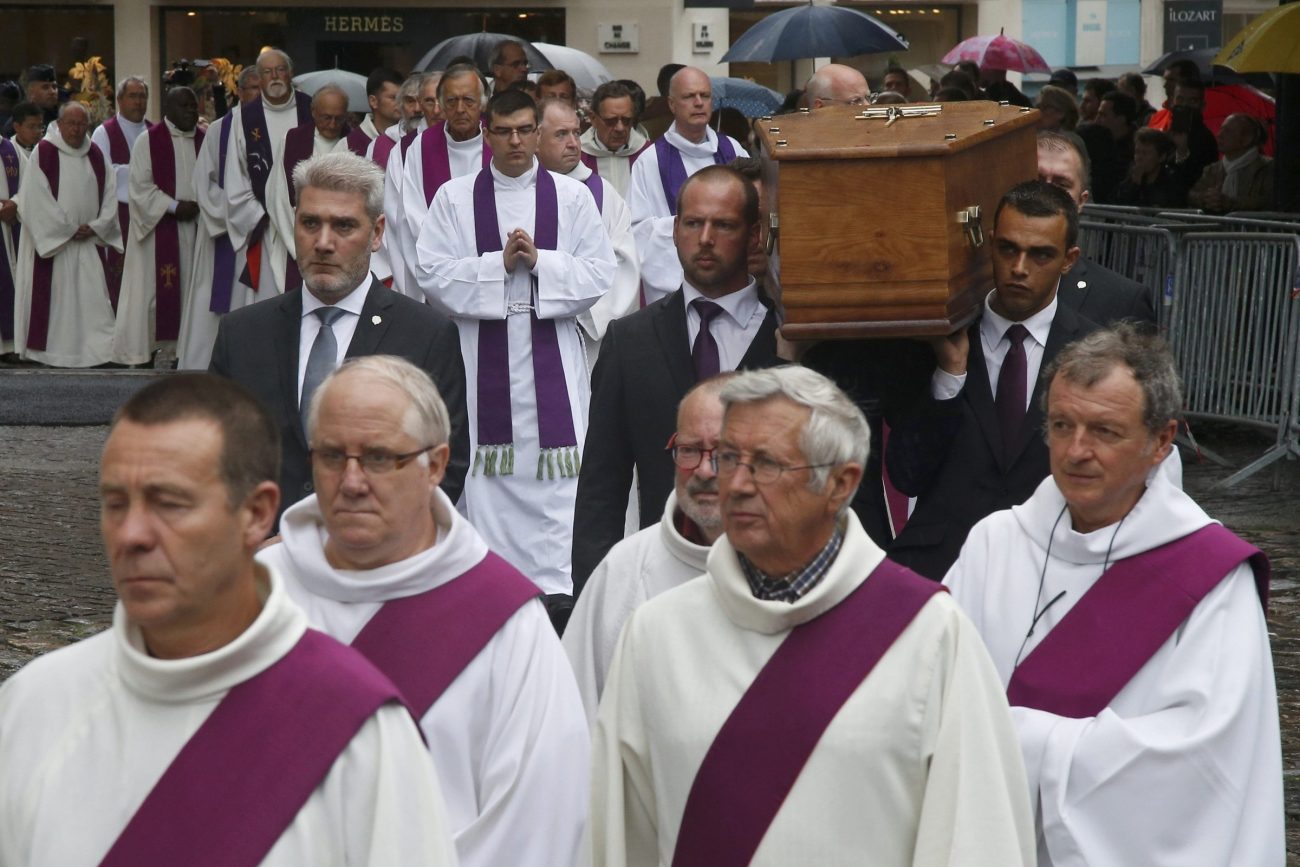 Pallbearers carry the coffin of Father Jacques Hamel Aug. 2, 2016, outside the cathedral in Rouen, France. Father Hamel was murdered by Islamists during Mass at his Normandy church that July. (CNS photo/Jacky Naegelen, Reuters)

PARIS (CNS) — The head of French bishops’ conference testified to a special commission of the National Assembly that while he understands the need to strengthen national security, a proposed law designed to rein in extremist militancy would place religions and religious believers under particular surveillance.

Archbishop Eric de Moulins-Beaufort of Reims, conference president, told the commission Jan. 4 that “the disadvantages of repressive legislation lie in the control measures they bring.”

“Some may be legitimate. But we can reasonably ask why they should specially apply to religious groups, and not to other associations or elements,” he said in remarks about the proposed law on separatism, which would impose new security and administrative curbs on churches and religious associations.

The legislation, introduced in December, would “strengthen respect for the principles of the republic” by compelling religious associations to comply with France’s 1905 law on church-state separation and empowering regional governors to compile fuller data on religious groups.

The legislation proposes tightening rules on social media, including information “aimed at exposing a person to immediate risk of an attack on his life, or his physical or psychological security,” and would speed court action against religiously motivated “threats, violence and intimidation against public service agents.”

Among financial transparency rules, it would require foreign donations of more than $12,300 to be officially registered by religious associations.

The law aims to curb “provocation of acts of terrorism, discrimination, hatred or violence” and would require official authorization for religious home schooling, tighten rules against forced marriages and outlaw the issuing of “virginity certificates” for Muslim brides.

France’s Muslim leaders were to submit opinions about the proposed law to the National Assembly commission Jan. 6.

In his testimony, Archbishop de Moulins-Beaufort said the new financial rules would not affect Catholic parishes and dioceses, who “survived principally from faithful donations,” but emphasized that other sectors of society, not just religion, should be subject to the same scrutiny.

“Our church can only express concern at such pressure, and ask why religions and religious believers are now to be kept under particular surveillance,” he said.

Firmer measures have long been anticipated to contain Islamist militancy in France, where 12 people were massacred in January 2015 at the satirical magazine Charlie Hebdo, and 90 were killed and 200 injured in coordinated attacks in Paris the following November.

In July 2016, a 75-year-old Catholic priest, Father Jacques Hamel, was murdered by Islamists during Mass at his Normandy church. In October, history teacher Samuel Paty was beheaded outside his school in Conflans-Sainte-Honorine.

Protestant and Orthodox leaders also testified about the proposed law Jan. 4 and criticized its blanket control and surveillance clauses. A leader of France’s Jewish minority, Joël Mergui, warned it would “compromise the religious freedom of those who are not creating any problem.”

“The enemy today is terrorism and radical Islam, not all religions — I cannot accept that we become collateral damage,” Mergui told the commission.

PREVIOUS: Pope will not baptize infants on feast day this year