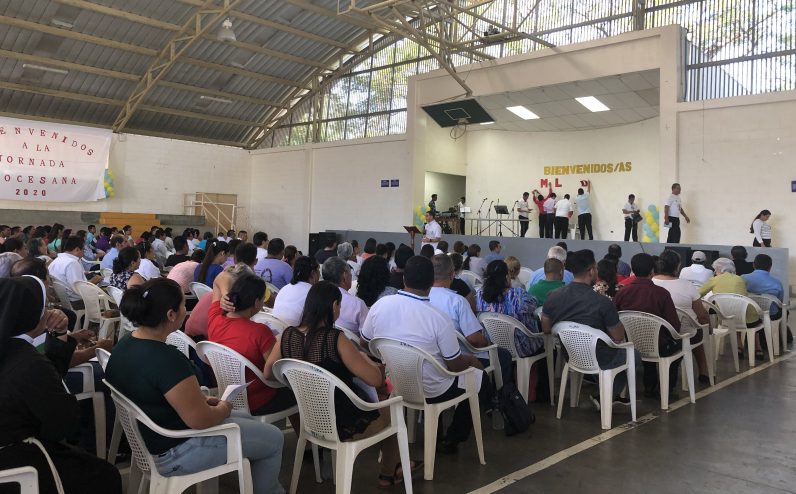 Hundreds of catechists and pastoral leaders take part in the Diocesan School in Chalatenango, El Salvador, Jan. 11, 2020. The project is funded in large part with help from the USCCB Subcommittee on the Church in Latin America. (CNS photo/ Rhina Guidos)

CHALATENANGO, El Salvador (CNS) — Though the Diocese of Chalatenango is about as far as you can get in El Salvador from the capital, lay ministers and catechists in this rural diocese — parts of it only accessible by horse — have been able to get quality spiritual formation without having to go far from home.

Financial help from the U.S. Conference of Catholic Bishops’ Subcommittee on the Church in Latin America has made it easier for Catholic ministers here to be able to learn about evangelization, to teach others how to read the Bible in small communities and to gain a deeper understanding of what spirituality is, via the Diocesan School — a series of programs for lay ministers tailored to the needs of this mountainous region.

“Chalatenango doesn’t have any centers for (spiritual) reflection, no forums or workshops” similar to those one can find in the city to help the laity become better catechists or ministers, so the local church has offered programs tailored to them, Chalatenango Bishop Oswaldo Escobar told Catholic News Service Jan. 21.

(The annual collection in the United States for the church in Latin America will be taken up in many U.S. dioceses this weekend.)

Father Manuel Acosta, a diocesan priest who teaches theology at San Salvador’s Jesuit Jose Simeon Cañas Central American University, said that what the ministers and catechists learn, in some cases, is specific to the diocese, which in the 1980s saw some of the heaviest fighting between rebels and government forces.

It’s hard to find a person from the diocese who didn’t have a family member “disappeared” or killed during El Salvador’s armed conflict from 1980 to 1992, or displaced to refugee camps in nearby Honduras, or who fled the country. More than 50 mass killings are believed to have taken place in Chalatenango.

“Some of the themes (of the Diocesan School) deal with the psychological, how to heal wounds, because we’re a diocese battered by the war, our laity is battered,” said Father Acosta. 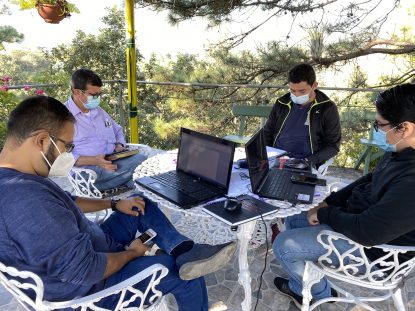 Father Manuel Acosta, in purple, prays with a group of seminarians in San Ignacio, El Salvador, as they operate the Diocesan School online Dec. 15, 2020. Following the pandemic, the school that trained lay leaders in the rural Diocese of Chalatenango, with help from the USCCB Subcommittee on the Church in Latin America, began religious instruction online. (CNS photo by Rhina Guidos)

The school’s instructors are priests or professionals in a variety of topics, such as human development, Bible experts or the environment. Until the pandemic affected travel, they would visit Chalatenango to provide instruction to the pastoral agents in person.

Father Acosta, who began kicking around the idea for the school with Bishop Escobar and other priests in 2017, said the idea was simple. Since the Second Vatican Council, there’s been talk about “renewing” the laity and “renewing” the church. But that’s something that, because of the war, reconstruction after the war and lack of money had never really happened in the diocese.

Renewal for the local church could only come from one place: the laity, he said. And just as priests and men and women religious need to constantly update their religious formation, so do pastoral agents and catechists. But that hadn’t taken place, in part, because the area is remote, removed from any great city center, and because the diocese lacked resources to send pastoral agents to San Salvador for training. In 2019, the diocese received a $20,000 pastoral grant, funds U.S. parishioners gave to the collection for Latin America. This year the collection takes place the weekend of Jan. 23 and 24.

“The school for laity in El Salvador is a shining example of how we can creatively support the faith formation of lay leaders by our generous contributions,” said Oblate Father Leo Perez, director of the Latin America collection. “In a spirit of solidarity with the Church in Latin America, we proclaim Jesus’ Gospel: ‘Seek first his kingdom and his righteousness, and all these things shall be yours as well.'” 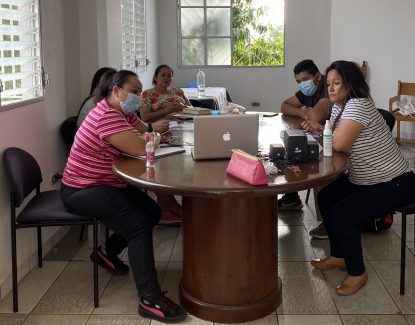 Lay ministers and catechists gather around a laptop as they take part online via the Diocesan School in Chalatenango, El Salvador Jan. 16, 2021. The project, funded in large part with help from the USCCB Subcommittee on the Church in Latin America, provides instruction from priests and experts for lay ministers via a series of programs tailored to the needs of the rural region. (CNS photo by Rhina Guidos)

Though the “school” doesn’t have an official building, before the pandemic the diocese was able to rent a locale to gather a large group on weekends, give an honorarium to speakers who came from the city for his or her presentation and feed, transport and provide written material to those who attended.

The Diocese of Chalatenango faces some unique challenges, he said, but the training pastoral agents have received also is unique. Through three different large-scale sessions, which last about four months and take part during the weekends, the diocese has been able to train, to date, more than 350 ministers and catechists. A fourth round of training is taking place right now.

Father Acosta said in addition to the ministry training, the school as offered courses on historical memory, human rights, the environment and “the common home,” but one of the most important is reconciliation.

“We couldn’t do it without the help of the collection for Latin America,” said Father Acosta. “And we wanted to give the laity a way to empower themselves, to change the church.”

NEXT: English bishop joins condemnation of China’s persecution of Muslims