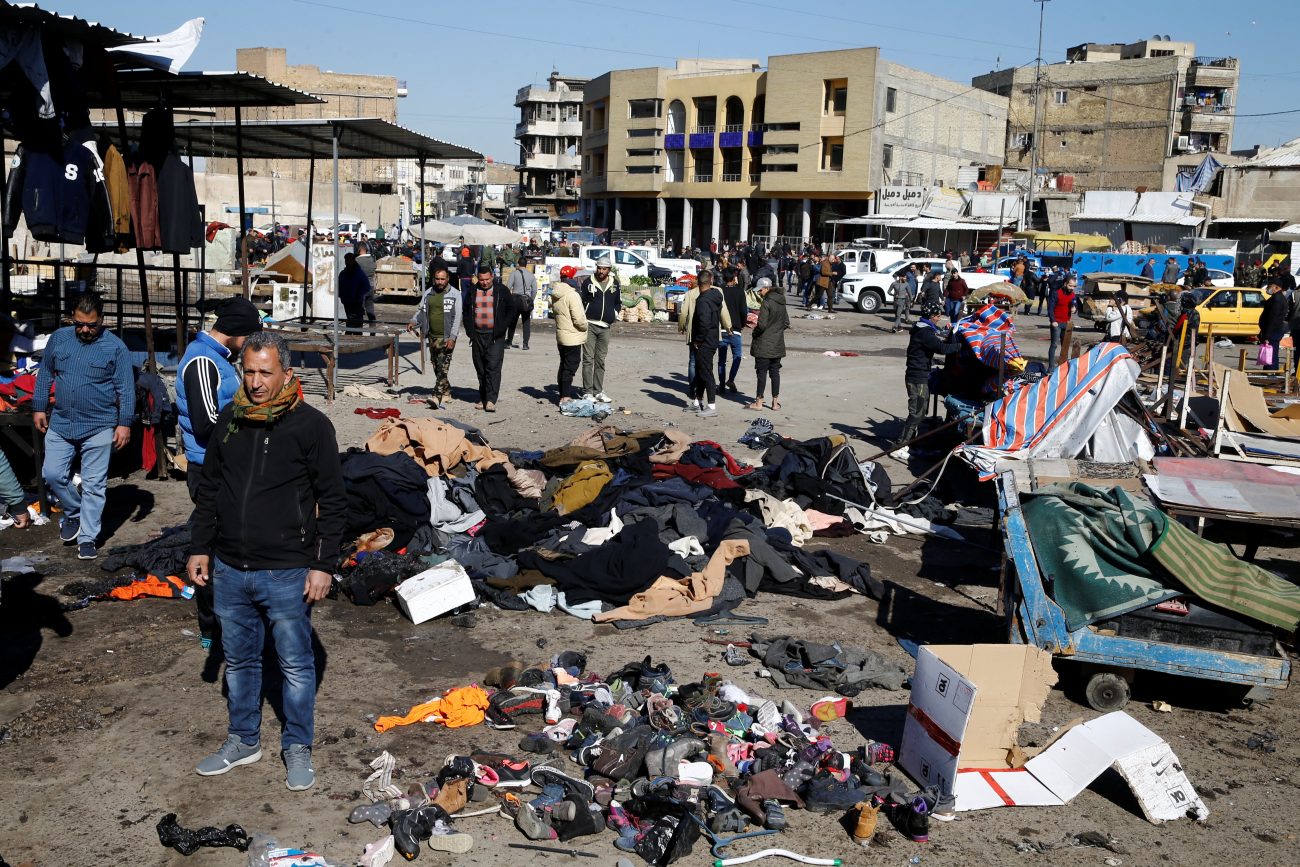 The site of a twin suicide bombing attack in a central market in Baghdad is seen Jan. 21, 2021. Pope Francis expressed his condolences to Iraqi President Barham Salih after two suicide bombings in the capital claimed the lives of dozens of people. The pope is scheduled to visit Iraq March 5-8. (CNS photo/Thaier al-Sudani, Reuters)

In a telegram sent Jan. 21 to Salih, Cardinal Pietro Parolin, Vatican secretary of state, said the pope “was deeply saddened to learn” of the attack at a clothing market in Tayaran Square.

“In deploring this senseless act of brutality, he prays for the deceased victims and their families, for the injured and for the emergency personnel in attendance,” Cardinal Parolin said.

“Trusting that all will continue work to overcome violence with fraternity, solidarity and peace, Pope Francis invokes upon the nation and its people the blessing of the Most High,” he said.

The two bombers blew themselves up in the crowded market area after being pursued by security forces.

According to The Washington Post, Khalid Al-Mahna, spokesman for the Iraqi Interior Ministry, said one bomber feigned illness to attract a crowd before detonating his explosives. The second bomber detonated himself as people came to help those wounded by the first explosion.

The previous suicide attack in the country took place three years ago in the same square, killing 35 people and injuring 90.

In a statement to Fides, the news agency of the Congregation for the Evangelization of Peoples, Iraqi Cardinal Louis Sako, Chaldean Catholic patriarch, said the attackers “wanted to send a message of death.”

He also speculated that the bombing was carried out in response to the postponement of elections in the country to October or to former President Donald Trump’s decision in November to reduce the U.S. military presence in the country to 2,500 troops.

“The fact remains that, so far, there is no declaration or claim from who is behind these explosions,” Cardinal Sako told Fides.

While no group has taken credit, it is suspected the attack was carried out by a group associated with the Islamic State.

Despite the Iraqi government claiming victory over the terrorist organization in 2017, remnants of the Islamic State continue to carry out smaller attacks on security forces in the country.

The attack also raised concerns about the pope’s safety during his planned visit to Iraq March 5-8.

In an interview with Italy’s Canale 5 broadcast Jan. 10, Pope Francis said that although he is still moving forward with the planned visit, he did not know “if it will happen.”

PREVIOUS: Chaldean Catholics in Iraq praying that pope visit will be possible

NEXT: Priest, parishioner among casualties in Madrid explosion