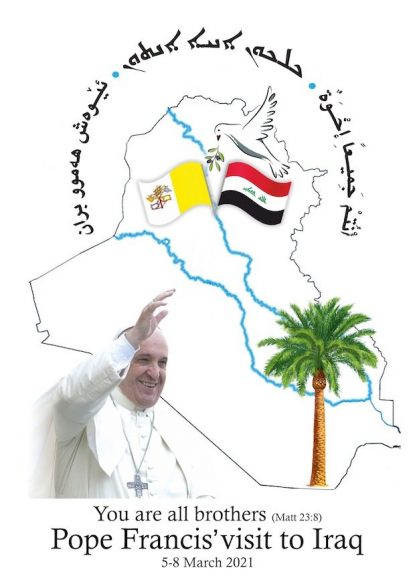 VATICAN CITY (CNS) — Chaldean Catholics in Iraq are praying that Pope Francis really will be able to visit their country in March.

Cardinal Louis Sako, the Baghdad-based patriarch of the Chaldean Catholic Church, composed a prayer for all his faithful to recite together at Masses beginning Jan. 17.

Agenzia Nova, an Italian news agency specializing in international political and economic reporting, published a story Jan. 12 saying that a security and intelligence delegation from Italy had arrived in Iraq to tour possible sites for papal events with Iraqi security officials.

While the Vatican announced the dates for the planned trip — March 5-8 — a formal program had not been released as of Jan. 14, and Pope Francis said in an interview Jan. 10 that he was not certain the visit would be possible.

There are obvious security concerns, but also questions about the making such a trip in the midst of the COVID-19 pandemic.

Still, Fides, the news agency of the Congregation for the Evangelization of Peoples, reported Jan. 14 that the Chaldean Catholics were asking “the Almighty Lord to make possible the announced visit of Pope Francis to the land of the two rivers,” the Euphrates and the Tigris.

The text of the prayer begins: “Lord our God, grant Pope Francis health and safety to carry out successfully this eagerly awaited visit. Bless his effort to promote dialogue, enhance fraternal reconciliation, build confidence, consolidate peace values and human dignity, especially for us Iraqis who have been through painful events that affected our lives.

“Lord, our Creator, enlighten our hearts with your light to recognize goodness and peace, and to realize them,” the prayer continued. “Mother Mary, we entrust Pope Francis’ visit to your maternal care so that the Lord may grant us the grace of living in a complete national communion and cooperate fraternally to build a better future for our country and our citizens. Amen.”

NEXT: Pope ‘deeply saddened’ by twin suicide bombings in Baghdad