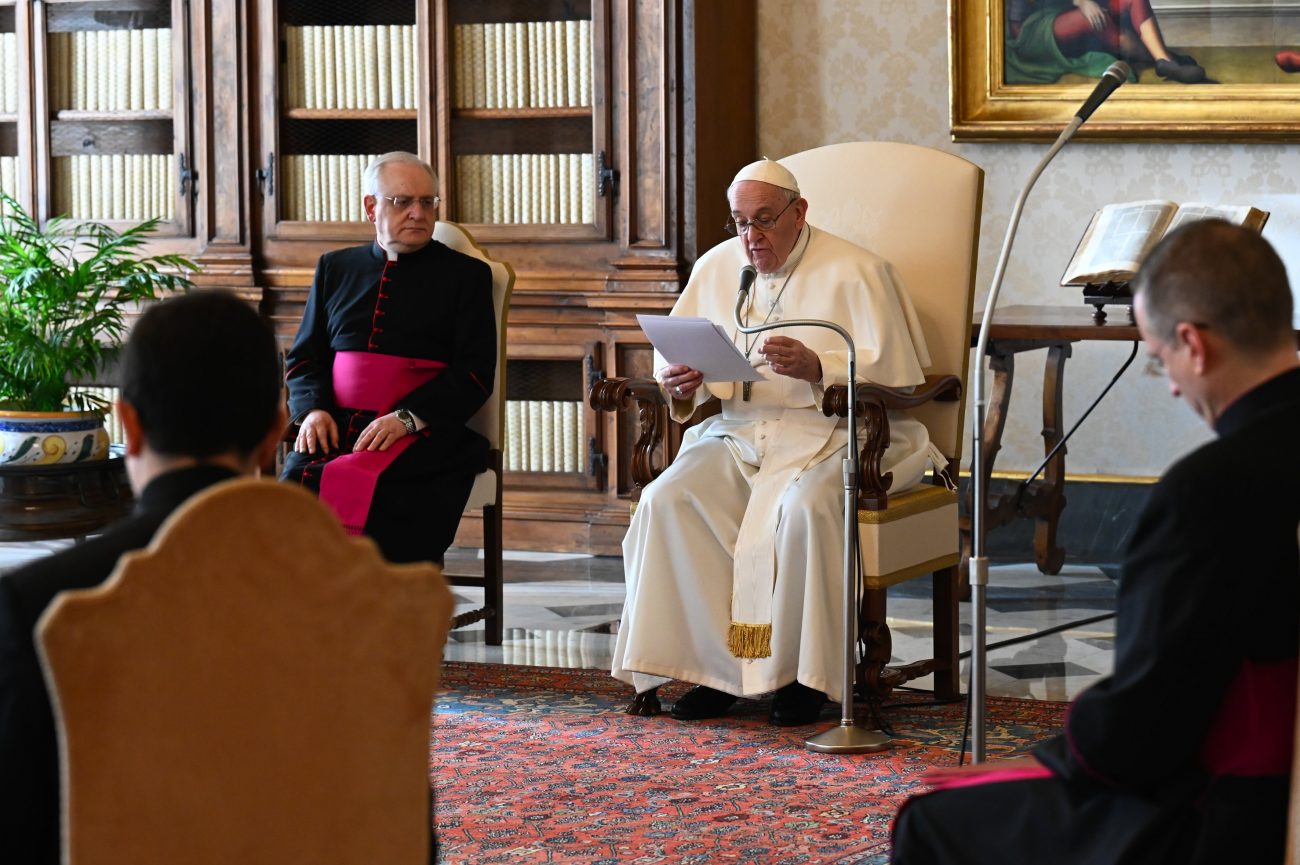 Pope Francis leads his general audience in the library of the Apostolic Palace at the Vatican Jan. 20, 2021. (CNS photo/Vatican Media)

VATICAN CITY (CNS) — Marking the Treaty on the Prohibition of Nuclear Weapons coming into force Jan. 22, Pope Francis encouraged nations to work toward a world free from all nuclear arms.

The treaty is the first legally binding international agreement to prohibit signatory states from the development, testing, production, stockpiling, stationing, transfer, use and threat of use of nuclear weapons, as well as assisting with and encouraging such activities.

Nuclear weapons have an “indiscriminate impact” as they can “strike large numbers of people in a short space of time and provoke long-lasting damage to the environment,” the pope said Jan. 20 during his weekly general audience, livestreamed from the library of the Apostolic Palace.

The pope “strongly encouraged” all nations and people “to work with determination to promote the conditions necessary for a world without nuclear arms, contributing to the advancement of peace and multilateral cooperation, which humanity greatly needs today.”

The Holy See was the among the first to ratify the treaty, which was approved by 122 U.N. members. Netherlands was the only country to vote against it while Singapore abstained.

Archbishop Paul Richard Gallagher, Vatican secretary for relations with states, signed it at the United Nations in New York the first day it was open for signatures in September 2017.

The treaty comes into force Jan. 22, three months after the required 50th nation ratified the historic document, which resulted from months of negotiations led by non-nuclear countries.

The Holy See was a key participant in the process that led to drafting the treaty, providing encouragement and advice to negotiators, according to Jesuit Father Drew Christiansen, a nuclear weapons expert who is professor of ethics and global development at Georgetown University.

The nuclear nations and those under the U.S. nuclear umbrella opposed the measure and played little if any role in negotiations. In addition to the U.S., the countries possessing nuclear weapons are Russia, China, United Kingdom, France, Israel, India, Pakistan and North Korea.

Data from various sources, including the U.S. Department of State and the Stockholm International Peace Research Institute, show that the nine countries hold an estimated 13,440 nuclear weapons.

NEXT: Christians must show world what journey to unity looks like, pope says