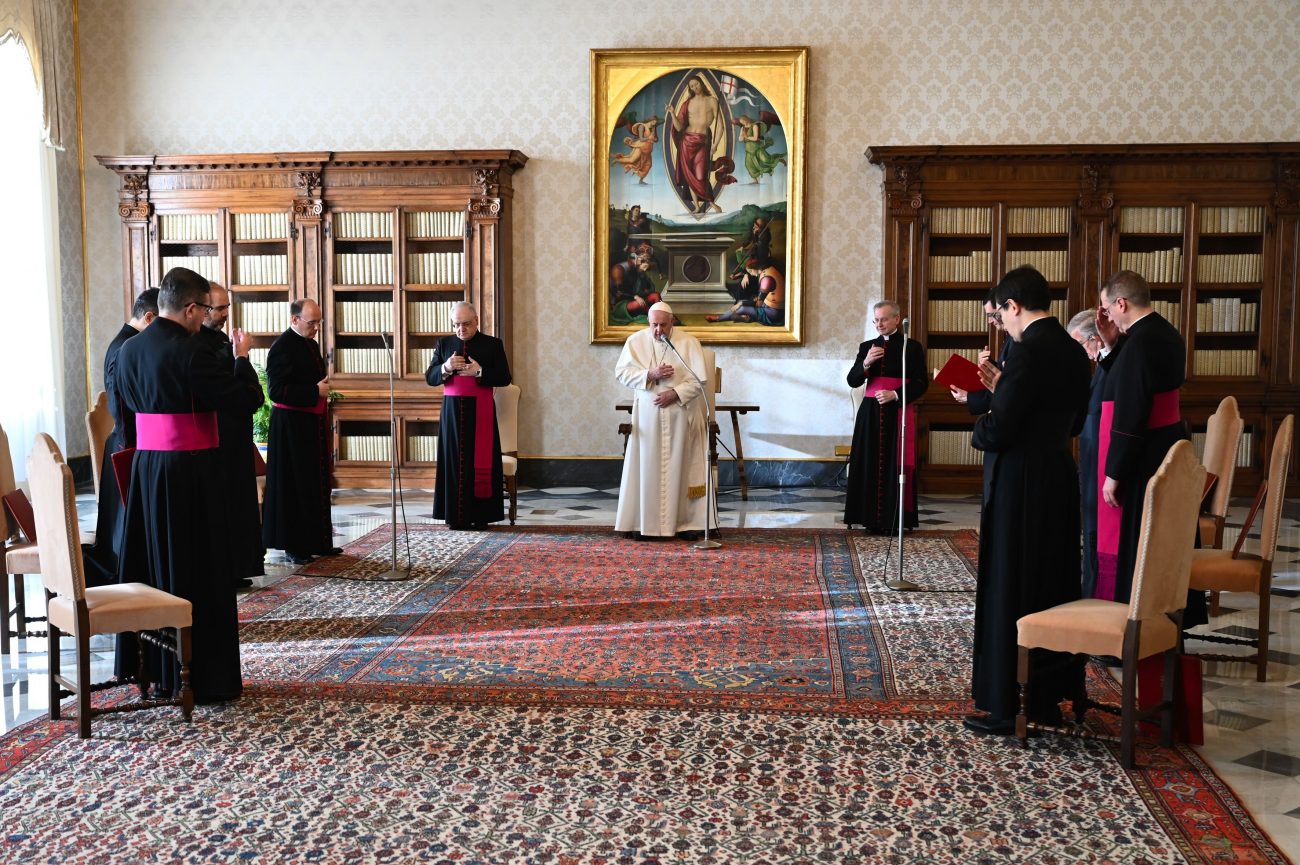 Pope Francis delivers his blessing during his general audience in the library of the Apostolic Palace at the Vatican Jan. 20, 2021. (CNS photo/Vatican Media)

The devil “fosters division everywhere and in every way” by tempting people “with the weaknesses of our brothers and sisters. He is astute: He magnifies others’ mistakes and defects, sows discord, provokes criticism and creates factions,” the pope said Jan. 20 during his weekly general audience.

God, on the other hand, “has another way. He takes us as we are, different, sinners and always nudges us toward unity,” he said.

In his audience talk, livestreamed from the library of the Apostolic Palace, the pope reflected on the Week of Prayer for Christian Unity, celebrated Jan. 18-25. The theme for the 2021 celebration, “Abide in my love … You shall bear much fruit,” is taken from the Gospel of St. John (15:1-17).

“The root of communion is the love of Christ, who makes us overcome our prejudices to see in others a brother or sister to be loved always,” the pope said.

In fact, the pope invited everyone to discover other Christian denominations — their traditions and their history — and see them as “gifts from God” present in one’s neighborhood or town.

“Let us begin to pray for them and, when possible, with them. We will thus learn to love and appreciate them,” he said.

The pope said that at this time of “serious hardship” in the world, the prayer for Christian unity was even more necessary.

“It is urgent that we set aside particular interests to promote the common good and so our good example is fundamental: It is essential that Christians pursue the path toward full visible unity.”

When Jesus prayed that his disciples “may all be one,” he was not ordering them to be united, but was praying “to the Father for us,” the pope said.

“This means that we are not able to achieve unity by ourselves, with our own strength. Above all, unity is a gift, it is a grace to be requested through prayer,” he said.

Unity is a difficult task, not just for Christian communities, but for each individual, he said.

“Even the Apostle Paul felt a lacerating conflict within himself: wanting the good but inclined toward evil,” he said.

From these internal struggles flow many of the conflicts and tensions in society, which is why “the solution to these divisions is not to oppose someone, because discord generates more discord. The true remedy begins by asking God for peace, reconciliation, unity.”

Praying for unity also means fighting “because our enemy, the devil, is the one who divides,” he added.

People need to ask themselves how they live each day and whether “we nurture conflict or fight for greater unity with the tools that God has given us: prayer and love.”

Christians also need to ask, “Do I pray for unity? It is Jesus’ will but, if we inspect the intentions for which we pray, we would probably realize that we have prayed little, perhaps never, for Christian unity. And yet, the world’s faith depends on it.”

The world will not come to believe in Christ and the Gospel because of “good arguments,” he said, “but because we will have borne witness to that love that unites us and draws us near to everyone.”

With all the positive steps forward in ecumenism, “we still need to persevere in love and in prayer, without lacking trust or tiring. It is the path that the Holy Spirit gave rise to in the church, in Christians, all of us, and from which there is no turning back,” the pope said.