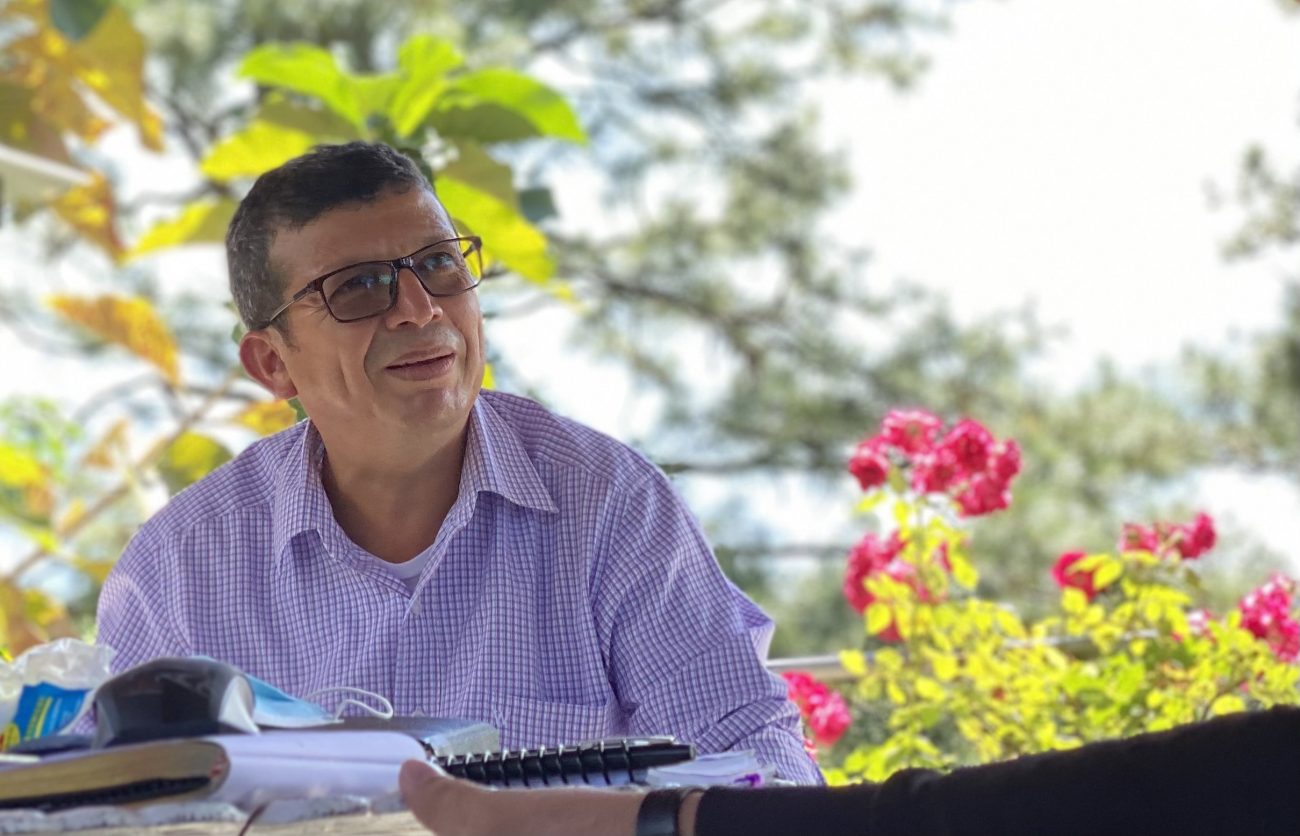 Father Manuel Acosta, professor of theology at El Salvador's Jose Simeón Cañas Central American University, speaks with seminarians Dec. 14, 2020 in San Ignacio, El Salvador. Father Acosta, as a theologian, was a teacher and later a colleague to three priests who were assassinated in El Salvador within the last three years. He wants civil and church authorities do more to investigate the crimes. (CNS photo/Rhina Guidos)

CHALATENANGO, El Salvador (CNS) — In his 28 years as a priest in El Salvador, Father Manuel Acosta has witnessed his share of violence. He lived through the killings of Catholic clergy, men and women religious, catechists and countless lay ministers persecuted during the country’s civil conflict in the 1980s. He has also lived through decades of gang aggression against El Salvador’s poor.

But he’s still visibly shaken when he speaks about the recent spate of violence, an unexplained killing of three priests in less than three years. All were his former students.

“I had no words,” said Father Acosta, a professor of theology at San Salvador’s José Simeón Cañas Central American University, known as the UCA, recalling his thoughts Aug. 7, the morning he heard about the latest killing of yet another former student. This time, Father Ricardo Cortez was found dead after being shot in the head.

“And I remember a phrase I keep saying out loud: Who will be the fourth?”

In other words, who will be next?

El Salvador, in recent years, has had one of the highest crime rates in the world for a nation not at war. Until a few years ago, most priests had been able to avoid becoming victims of violence. But because crimes are rarely investigated, much less persecuted in the Central American nation, it’s hard to figure out whether the killings represent a new pattern of crime or whether they are random.

In the case of Father Cortez, his main interest was the success of the St. Oscar Romero seminary in Santiago de Maria, where he was rector. On weekends, he left the seminary grounds to tend to a parish in his nearby home Diocese of Zacatecoluca, which is where he was headed to celebrate Mass when he was shot.

He was the third priest to have been assassinated since the April 2018 killing of Father Walter Osmir Vásquez Jiménez and the May 2019 killing of Father Cecilio Perez. A former sacristan was found guilty of aggravated homicide in February 2020 in Father Perez’s murder, though many have doubts about whether he really was the culprit.

“It destroys my soul and my first reaction is ‘until when, Lord, will you stop this?'” said Father Acosta, referencing Psalm 13: “How long, Lord?”

Each killing, he said, “has taken a bit of my heart with it. They were my students.”

“Three priests have been killed. I don’t know what to call this, if it’s a grace, if it’s just by chance, is it a revelation?” he said in a Dec. 11 interview with Catholic News Service.

What’s clear is that Father Cortez, the last of the priests killed, was authentic, a hard worker, transparent and humble, he said.

“You could tell there was sincerity in his heart, honesty, and whatever he said to you came from his heart,” Father Acosta said. “He didn’t have two sides. He had no room for dishonesty.”

Father Acosta said it was hard to think of why anyone would want any of his three former students dead, although the clergy in the El Salvador, as they did during the war, have in recent history taken part “in the passion of the people,” meaning they, too, have suffered the same atrocities — torture, human rights abuses and death — as the rest of the poor populace.

In that sense, the poor, too, suffer not because of something they did, but because they cannot defend themselves and authorities do not defend them.

“The Salvadoran church, in its incarnation of the Gospel, has suffered the same fate as the poor,” Father Acosta said. “As priests, we are proud of that, to have participated in the passion of the poor — with our blood. But, I insist, that has to encourage us to also be demanding of this current system with regard to impunity and the truth.”

He said it is easy to get caught up in sentimentalism, saying “Father Ricardo lives,” but his death has to mean more than that. It has to be the impetus to demand that no others die, priests or anyone else, and that no other crimes go unpunished, he said.

Sadly, he added, El Salvador has a long list of clergy and other members of the church, including St. Oscar Romero, who died at the hands of criminals who have never faced justice for their crimes.

“The government has been unable to clear up these crimes against humanity,” Father Acosta said.

Catholic Church authorities, he said, have “lacked courage and prophecy, parrhesia, as the New Testament calls it, that boldness and strength we must have to ask for the truth.”

The country’s bishops have issued statements and spoken out against the violence, particularly after the last priest killing, but Father Acosta said he believes it has not been enough.

“And so, these killings, they go unpunished,” he said.

After Father Cortez’s death, the country’s largest cooperative of priests “exhorted” the Salvadoran bishops’ conference to speak out with force against the slaying of Father Cortez and carry out its own investigation. It also asked for the backing of religious groups and human rights organizations to join the cooperative in “demanding the truth in this abominable killing.”

“Enough with the killing of priests in El Salvador,” the members said in a press release.

Yet little has been done.

“It was the cry of a persecuted community. How long?” Father Acosta said. “How is it possible that they kill our priests and we’re incapable of banding together?”