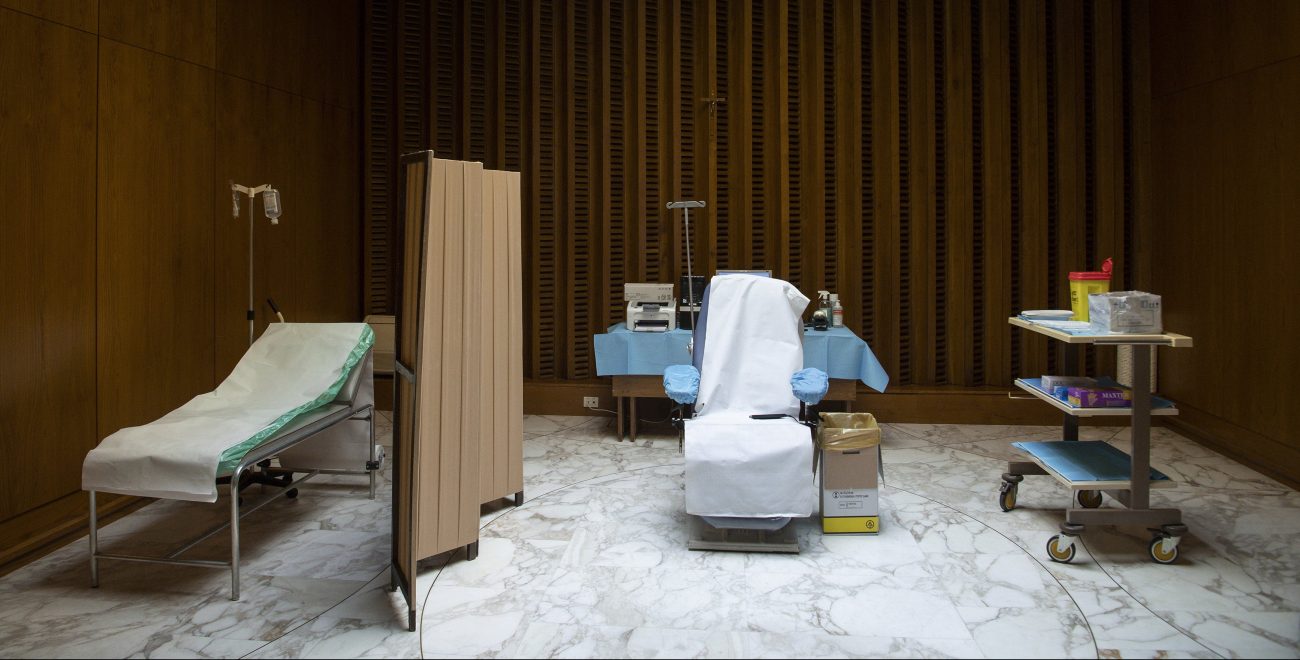 The Vatican health service began vaccinating employees, residents and retirees with the COVID-19 vaccine Jan. 13, 2021, in a makeshift clinic set up in the atrium of the Vatican audience hall. Pope Francis and retired Pope Benedict XVI have both said they will be vaccinated. (CNS photo/Vatican Media)

VATICAN CITY (CNS) — Both Pope Francis and retired Pope Benedict XVI have received the first dose of the vaccine against COVID-19 after the Vatican started vaccinating its employees and residents Jan. 13.

While it was reported widely that Pope Francis received the vaccine Jan. 13, the retired pope’s secretary, Archbishop Georg Ganswein, told Vatican News that Pope Benedict received his shot the morning of Jan. 14.

The archbishop had told the German Catholic news agency KNA Jan. 11 that the 93-year-old pope, who lives in a converted monastery in the Vatican Gardens, and his entire household staff wanted to be vaccinated as soon as the vaccine was available in Vatican City State.

He told Vatican News that the retired pope has been following the news “on television, and he shares our concerns about the pandemic, about what is happening in the world, about the many people who have lost their life because of the virus.”

“There have been people he knows who have died because of COVID-19,” he added.

Archbishop Ganswein said the retired pope is still very sharp mentally but that his voice and physical strength have weakened. “He is very frail and only can walk a little with a walker.”

He rests more, “but we still go out every afternoon, despite the cold, in the Vatican Gardens,” he added.

The Vatican’s vaccination program was voluntary. The Vatican health service was giving priority to its health care workers, security personnel, employees who deal with the public and older residents, employees and retirees.

In early December, Dr. Andrea Arcangeli, director of the Vatican health service, said they would begin with the Pfizer vaccine, which was developed in conjunction with BioNTech.

Pope Francis had said in a television interview broadcast Jan. 10 that he too would be vaccinated against the coronavirus as soon as it was available.

He said that he believed that from an ethical point of view, everyone should take the vaccine because those who did not would not only put their own lives at risk, but also the lives of others.

In a press release Jan. 2, the Vatican’s health services department said it purchased an “ultra-low temperature refrigerator” for storing the vaccines and said it expected to receive enough doses to cover “the needs of the Holy See and Vatican City State.”

The Vatican reported its first known case of infection in early March, and since then there have been another 25 reported cases — including 11 Swiss guards in October.

Pope Francis’ personal doctor died Jan. 9 of complications caused by COVID-19. Fabrizio Soccorsi, 78, had been admitted to Rome’s Gemelli hospital Dec. 26 because of cancer, according to the Italian Catholic agency SIR, Jan. 9.

However, he died because of “pulmonary complications” caused by COVID-19, the agency said, without providing further details.