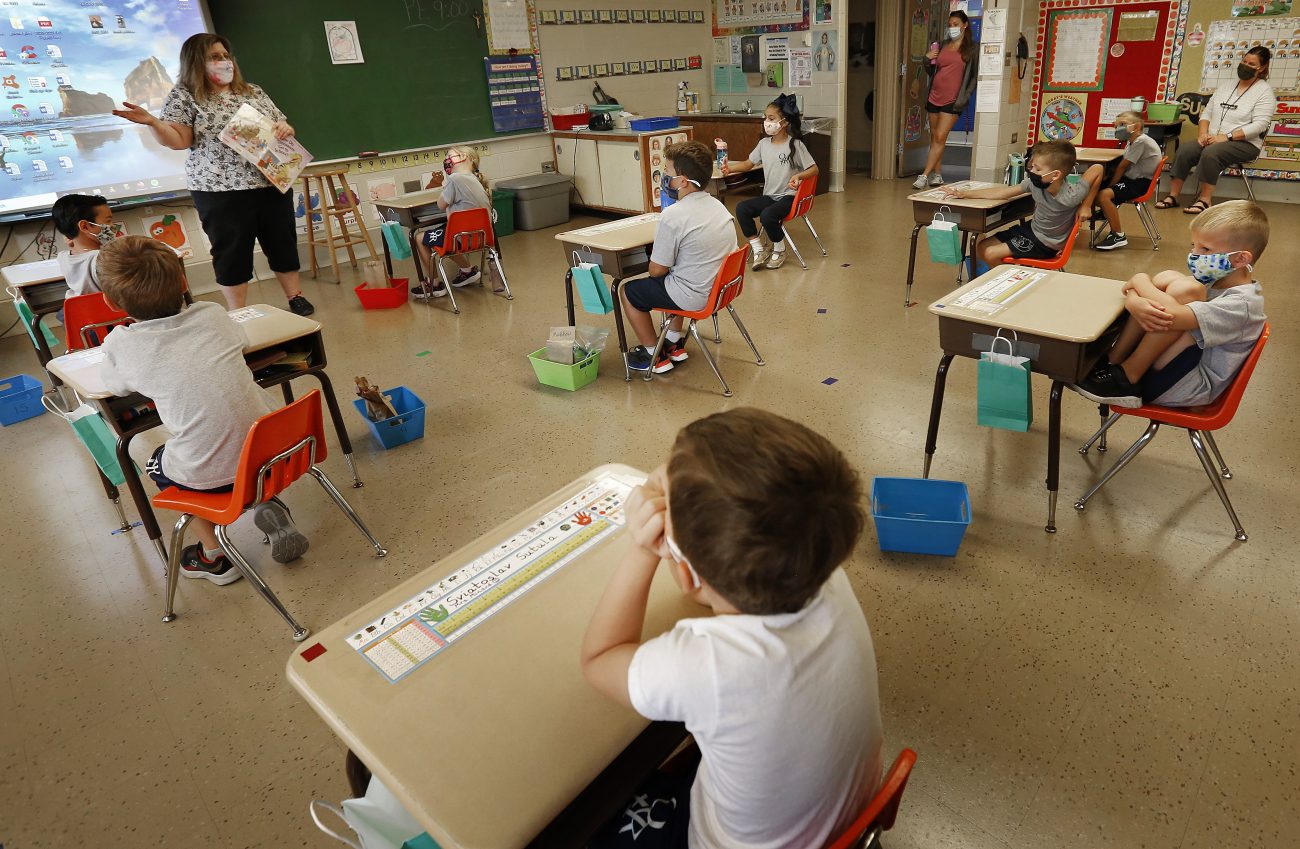 Students at Queen of the Rosary School in Elk Grove Village, Ill., make their way through the first week of school Aug. 17, 2020, while following the Archdiocese of Chicago's guidelines to prevent the spread of COVID-19. (CNS photo/Karen Callaway, Chicago Catholic)

CHICAGO (CNS) — Chicago archdiocesan school officials are finding that in-person learning, done safely and in compliance with federal guidelines, has not resulted in high rates of person-to-person transmission of COVID-19 among students and staff.

Jim Rigg, archdiocesan superintendent of Catholic schools, said the experience in one of the nation’s largest parochial school systems coincides with the findings of a Centers for Disease Control and Prevention study.

“To be able to say here in late January that we’ve had virtually no person-to person transmission in our schools that we know of, that we’ve been able to continue to provide in-person education since the beginning of the year, that is a major success,” Rigg told the Chicago Catholic, newspaper of the Archdiocese of Chicago.

“I can’t take credit for it. The credit belongs to our teachers and principals and school staff members,” he added.

Released Jan. 26, the study said that in-person learning conducted with safety measures in place, such as wearing masks and social distancing, had not “contributed meaningfully to increased community transmission” of the illness caused by the coronavirus.

The archdiocese’s school system, which includes 159 schools and about 5,000 staff, was the largest system in the state to reopen for in-person learning and the first one in Chicago, Rigg said.

“We believe, of course, that in-person learning is in the best interest of our students no matter their background,” he explained. “We’ve been so proud of the quality of education that we’ve been able to provide since the school year began. It was a lot of work. It was a heavy lift to get 159 schools up and running for in-person instruction and to implement the huge array of health and safety protocols.”

Last summer, the archdiocese worked with the CDC and health departments from the state, Cook and Lake counties and the city of Chicago, as well as with its own team of medical advisors to develop a plan that ensured the ongoing safety of students and employees, he noted.

School officials have found that students have benefited.

Paula Fernandez, director of strategic execution and analytics for the archdiocesan Office of Catholic Schools and a mother of two girls who attend St. Francis Xavier School in suburban Wilmette, has seen the difference in-person learning has made in the life of her daughters.

“(Remote learning) was really tough on the kids. Psychologically, it was burdensome. They really missed being with their friends,” she said. “My younger one especially really struggled to stay engaged to the point that we actually had to hire someone to sit with her several hours a day to get that engagement to happen.”

Fernandez praised the teachers who pivoted quickly and who had within days “robust plans” to work with the children virtually.

“I thought that was the most impressive moment in my interactions with the school that I ever had, the pace at which these teachers learned this new way to teach. I was blown away,” she said.

Her children kept on pace and learned.

“Coming back in the fall, my kids have just been overjoyed. Let me tell you, these are super compliant kids, not just my two but all of the kids there. They always have their masks on. They are always conscious of distance,” she said. “They’ve really adopted the mentality that this is what we have to do to have what we want, which is to be safe at school with their teachers.”

Her husband, Geno Fernandez, serves as president of the archdiocesan school board. He said Chicago Cardinal Blase J. Cupich and archdiocesan schools should be credited for being “courageous” in reopening schools for in-person learning.

“We did a lot better than most Fortune 100 companies that I know of — that is we the Archdiocese of Chicago — not just in the schools but also in the parishes in pivoting to what was required by the health agencies,” Geno Fernandez said, noting that the guidelines change and local protocols need to be updated and implemented too.

“Many Fortune 100 companies with hundreds of times the resources that the Archdiocese of Chicago has were harder pressed to react to the pandemic and its implications than we were,” he said.

NEXT: Kelly to succeed Anderson as Knights of Columbus CEO