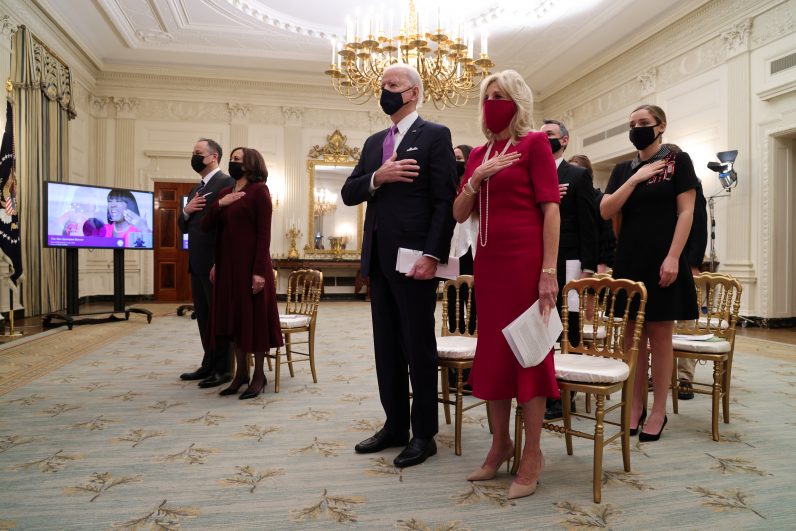 WASHINGTON (CNS) — For many in the nation, this is a dark time because of job loss, hunger, evictions, sickness and death because of COVID-19, “so where do we turn? Faith” President Joe Biden said, addressing the National Prayer Breakfast Feb. 4.

“Kierkegaard wrote, ‘Faith sees best in the dark.’ I believe that to be true. For me, in the darkest moments, faith provides hope and solace, it provides clarity and purpose as well. It shows the way forward,” said Biden, a Catholic.

“Faith shows the way forward as one nation in a common purpose,” he said, echoing his theme of unity in his Jan. 20 inaugural address.

Those going hungry, facing eviction, lacking health care or losing their lives “aren’t Democrats and Republicans — they’re our fellow Americans, fellow human beings,” he said. “This is not a nation that can, or will, simply stand by and watch this. It is not who we are.”

“We just witnessed images we never imagined, images that now we will never forget: a violent assault on the U.S. Capitol, assault on our democracy, on our Capitol,” Biden said. “A violent attack that threatened lives and took lives. We know now that we must confront and defeat political extremism, white supremacy and domestic terrorism.”

This nation is not a country “that can or will simply stand by and watch this. That’s not who we are. It’s not who faith calls us to be,” he said. “In this moment, we cannot be timid or tired. We have too much work to do. It’s by our work, not just our words, that we’re going to be judged.” 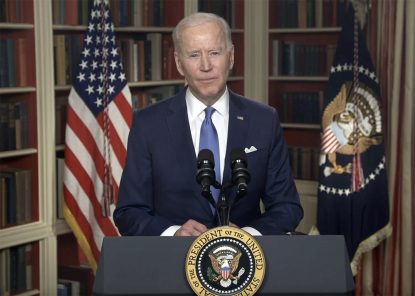 Former Sen. Mark Pryor, D-Arkansas, introduced the Lord’s Prayer being recited by people around the world; each person read a line of the prayer.

The National Prayer Breakfast, which is always on the first Thursday in February, took place virtually this year because of the pandemic. It is usually held at the Washington Hilton, drawing nearly 4,000 guests from around the world.

It dates back to the war years of the early 1940s. The first official event took place in 1953 when President Dwight D. Eisenhower accepted an invitation by House and Senate prayer groups to join them in praying for the nation and its leaders.

Hosted by members of Congress, the event is organized and funded by the Fellowship Foundation, a Christian organization. It is designed to be a forum for the political, social, and business elite to assemble and pray together.

Since the inception of the National Prayer Breakfast, several U.S. states and cities and other countries have established their own annual prayer breakfast events.

In remarks introducing the livestream of breakfast, Coons said he and his three colleagues from Congress are the co-chairs of prayer breakfast groups that meet weekly in their respective chambers “for a moment of reflection and prayer for the sharing of a hymn or individual stores and concerns and (how) faith has impacted our lives.”

“We hope this National Prayer Breakfast, like these weekly gatherings, is an opportunity for all of us to gather from around our country and the world in the spirit of Jesus, for a refreshing morning of reflection,” he added.

Scott said he was proud “that in a bipartisan fashion, in a bicameral fashion, we continue a tradition that has been around for nearly 70 years.”

“Our nation today more than ever needs to see a bipartisan coalition of believers coming together. … Now more than ever we need Democrats and Republicans to come together, to be together in the spirit of Jesus,” he said.

The breakfast “is a great opportunity for us to remember exactly what our lives are about,” Scott added.

Remembering “to love our neighbors and even the more demanding (call) to love our enemies is one of the biggest challenges we have and something we need to do right now,” he said. “This is a great opportunity to remind us of that and to seek inspiration to continue to find unity.”

Later, Suozzi and Moolenaar introduced the musical group that performed for the virtual audience, We the Kingdom of Nashville, Tennessee. Before their introduction, each congressman commented on the value they find in the regular House prayer breakfasts.

Suozzi said he is often told by fellow lawmakers that even if they do not attend the breakfasts, they are grateful for the prayers “and they make a difference.”

Moolenaar said that amid today’s “political discord,” when people so often are “demonizing” those on the opposite side of issues, the breakfasts are “a welcoming environment that allows us to see the best in one another and better understand each other.”