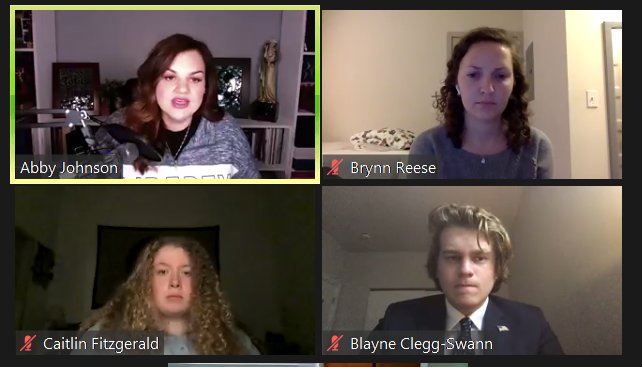 Abby Johnson, top left, speaks during a Zoom conference at The Catholic University of America Feb. 9, 2021. She is the former Planned Parenthood administrator who quit her job to join the pro-life movement. Critics of Johnson have labeled some of her past comments as "hate speech." (CNS screen grab/courtesy Kurt Jensen)

WASHINGTON (CNS) — In her Zoom presentation for The Catholic University of America Feb. 9, Abby Johnson didn’t address the controversy that had preceded her appearance.

Instead, the founder of the And Then There Were None ministry, the former Planned Parenthood clinic director whose book “Unplanned” became a 2019 film that has become part of the pro-life landscape, adhered to a presentation she’s given many times.

“One of the things we must know as Catholic Christians is how to defend our faith,” she acknowledged.

Johnson was originally invited to speak on behalf of Cardinals for Life, the campus pro-life group. But complaints by other students about comments she’d made on race — as well as her being at the U.S. Capitol Jan. 6 though not involved in the insurrection — led the campus chaplain and adviser to the group, Conventual Franciscan Father Jude DeAngelo, to recommend the appearance be postponed indefinitely.

In response, Anna Stephens, the senior who headed Cardinals for Life, resigned, complaining in a letter to university president John Garvey that she had been “pressured, against my conscience” to delay Johnson’s talk.

The event was quickly picked up instead by the campus chapter of College Republicans and proceeded on schedule. Blayne Clegg-Swann, a sophomore and president of the chapter, said their office had been vandalized earlier in the day.

“The campaign against us … ironically had the effect of strengthening our club, not weakening it,” he said while introducing Johnson.

The rest of the controversy played out in a series of earlier statements.

“As the event drew closer, we began to hear from a number of our students representing various communities on campus that strongly opposed the presentation by Ms. Johnson,” Garvey said in a statement. “The students cited various social media postings by Ms. Johnson that they found deeply offensive.”

Garvey said an event for students who opposed Johnson’s appearance was to be held at the same time.

In a since-deleted YouTube video uploaded last June and made in the wake of the death of George Floyd while in police custody, Johnson, a mother of eight, said she thought police would be “smart” if they ever profiled her biracial adopted son, since “statistically, my brown son is more likely to commit a violent offense over my white sons.”

Johnson also spoke at the Republican National Convention in August, attended President Donald Trump’s rally on the Ellipse Jan. 6, and later recorded herself at the East Front of the Capitol, although she was not among those who invaded the building, and has not been charged in that incident.

On Jan. 29, she was an invited marcher in the national March for Life in Washington.

On her Facebook page Feb. 8, Johnson said: “(L)iberal ‘Catholics’ have now begun to put pressure on the university, urging them to cancel the event with me. Why? Well, because I supported Trump, of course! When I look at the people who are urging for the cancellation, their bios have their pronouns listed, rainbow flags, they are people who adore (President Joe) Biden, support the BLM.”

Father DeAngelo in his statement, posted on the university’s campus ministry page, said: “It is not Ms. Johnson’s pro-life position that led me to counsel the Cardinals for Life to reconsider the event tomorrow. It is the hurt and pain many students on our campus are experiencing. It is our brothers and sisters of color who are hurting the most, I believe.”

“As chaplain charged with the care of souls, I personally believe there are better pro-life speakers than Ms. Johnson who can bring the pro-life message to students who are hungry for the truth that every human life from conception to natural death is sacred and needs our protection,” he said.

Father DeAngelo also said he wanted to remind everyone that Johnson “will give her talk and then she will leave and we will still have to learn to live with one another. How will we accomplish that? Because we can’t go on the way we are with the divisiveness of these past several days.”

Johnson, a Texas native, began volunteering for Planned Parenthood in 2001 and joined its clinic in Bryan, Texas, shortly later. She resigned in 2009 after she was asked to assist with an ultrasound-guided abortion of a 13-week-old fetus, as she recounts in “Unplanned.”

Johnson’s faith journey began with a Baptist upbringing in Louisiana. At the time of her Planned Parenthood involvement, she was a member of an Episcopal parish, but “when I became pro-life, the priest told me I was not welcome,” she told Catholic News Service in a 2019 interview, and she and husband Doug joined a Missouri Synod Lutheran congregation.

Becoming a Catholic in 2012, she said then, was an easy transformation. “When I left Planned Parenthood, I left all my friends behind. All my new friends happened to be Catholic. It felt so familiar and it just felt right.”

On Zoom, Johnson cited Pope Francis’ 2013 apostolic exhortation “Evangelii Gaudium” (“The Joy of the Gospel”) in which he discussed the “the Gospel of accompaniment.”

“Sometimes that journey is going to be very messy,” she said.

Johnson’s 2012 visit to the university also was met with objections. The student government voted to block the administration from funding her lecture, but it was overruled.