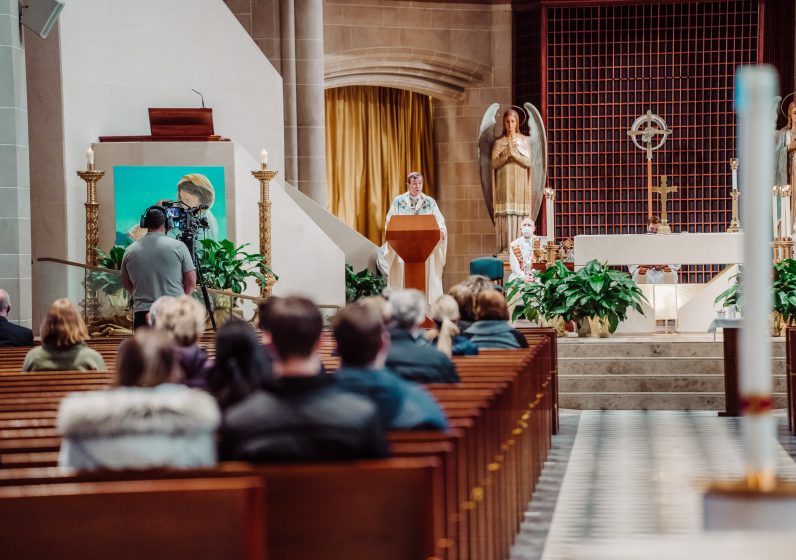 Detroit Archbishop Allen H. Vigneron celebrates a Mass at the Cathedral of the Most Blessed Sacrament for “the protection of the unborn” Jan. 23, 2021, amid the coronavirus pandemic. (CNS photo/Valaurian Waller, Detroit Catholic)

DETROIT (CNS) — Citing the “essential and central nature of the eucharistic sacrifice” in the life of the Catholic Church, Detroit Archbishop Allen H. Vigneron Feb. 9 announced the general dispensation from Sunday Mass for Catholics in the Archdiocese of Detroit will expire March 13.

However, while the general dispensation — which relieves all Catholics in the archdiocese from their moral obligation to attend Mass on Sundays and holy days — is expiring, the archbishop said he will continue to grant “particular dispensations” to those in need, including those who are at high risk of COVID-19.

Others who may continue to be excused from their Sunday obligation include:

— Those who are ill or whose health would be significantly compromised were they to contract a communicable illness.

— Those who care for the sick, homebound or infirmed or someone in a high-risk category; pregnant women; and those age 65 or older.

— Those who cannot attend Mass for other reasons — such as a lack of transportation or being turned away because of capacity limits; and those who have “significant fear or anxiety of becoming ill by being at Mass.”

Anyone who exhibits flulike symptoms or believes they might be asymptomatically carrying COVID-19 or another communicable illness also are asked not to attend Mass “as an act of justice and charity” toward others, Archbishop Vigneron said in a letter to the faithful. 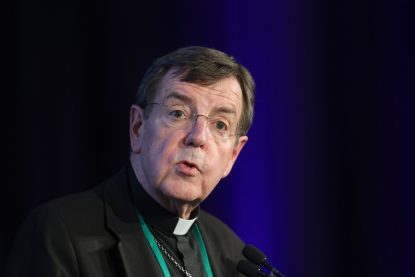 “In allowing the general dispensation to expire, we welcome back to Mass all Catholics who have already been engaged in other activities that would present a similar or greater risk of exposure, such as eating out at restaurants, traveling, partaking in nonessential shopping and widening one’s circle of contacts,” the archbishop wrote. “These individuals should also prepare to return to Mass in recognition of its preeminence in our lives as Catholics.”

The end of the general dispensation was originally set to expire on Ash Wednesday, Feb. 17, but it comes exactly a year after it was implemented March 13, 2020, when the coronavirus pandemic broke out in southeast Michigan.

Public liturgies were suspended for two months in the immediate aftermath, after which parishes began adopting rigorous cleaning, masking and social-distancing policies.

Since then, churches have restricted capacity and offered livestream Masses in an effort to limit the virus’ spread.

While livestream Masses will still be offered and serve as “a means to help Catholics nourish their souls when they could not be present for Mass, we must remember that it cannot become the norm,” Archbishop Vigneron said.

“God did not come to us virtually. He came to us — and continues to come to us — in the flesh,” he said. “As Catholics, unmediated contact with the real presence of the flesh and blood of Our Lord in offering this sacrifice to the Father is irreplaceable and essential.” 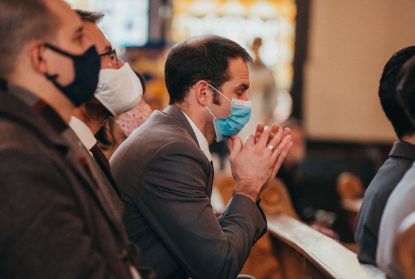 A man prays during Mass at Sweetest Heart of Mary Church in Detroit Nov. 21, 2020. Detroit Archbishop Allen H. Vigneron Feb. 9 announced the general dispensation from Sunday Mass for Catholics in the archdiocese expires March 13. Health and safety precautions will remain in place and particular dispensations will be granted to those in need, including those at high risk of COVID-19. (CNS photo/Valaurian Waller, Detroit Catholic)

Masses will continue to be limited to 50% capacity, and all masking and distancing requirements will remain in force. To accommodate a potential increase in attendance, the archbishop asked pastors to consider adjusting their Mass schedules “to make it easier for as many of the faithful as possible to attend Mass while still practicing social distancing during the approaching Lent and Easter seasons.”

While the pandemic continues, the rate of infection in Michigan appears to have slowed in recent weeks. Last week, the state reported 8,407 cases and 293 deaths — the lowest weekly total since early October. Federal officials estimate about 10% of Americans so far have received a COVID-19 vaccine dose.

Archbishop Vigneron offered his “sincere gratitude” for the “first-rate precautionary measures” parishes, pastors and schools have taken to keep parishioners and students safe.

Since March 2020, Catholic parishes and schools have been remarkably successful in limiting the coronavirus’ spread, with few parish or school-related outbreaks reported.

The decision to return to Mass “was not undertaken lightly,” and each step in the archdiocese’s pandemic response has been guided and informed by public health experts, Archbishop Vigneron said.

“The health and safety of our communities is and always will be paramount as we continue to closely monitor local conditions,” he said.

Other Mass-related precautions, such as the offering of Communion under the species of bread alone and the emptying of holy water fonts, will also continue.

Archbishop Vigneron asked for the continued intercession of Our Lady of Lourdes, patroness of those who are ill and whose feast day is Feb. 11, as Catholics return to the pews.

“I ask you, brothers and sisters, to join me in offering prayers of thanksgiving to Our Blessed Mother for her intercession so far and to pray for her continued accompaniment,” the archbishop said.

“With her help, let us persevere in hope to face the challenges of this virus and continue to give witness to our confidence in the good news of the Lord’s victory over suffering and death,” he added.

Stechschulte is editor-in-chief of Detroit Catholic, the outlet of the Archdiocese of Detroit.

NEXT: Ex-seminarian’s suit against archdiocese, seminary in Rome called baseless