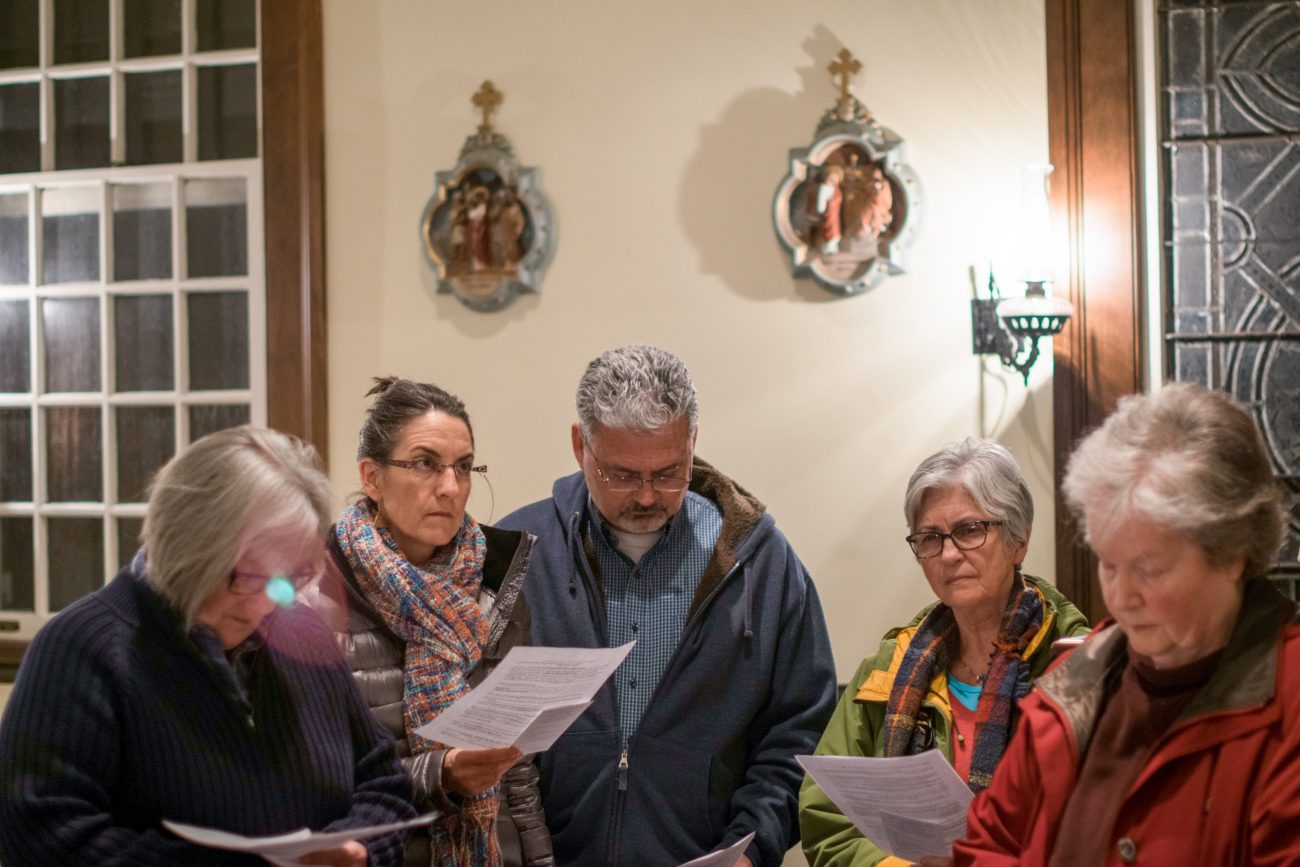 Death penalty opponents Carol Mayfield, from left, Pilar and Ron Jones, Maryellen Rodgers and Mary Anne Cummins gather at historic St. Mary of Sorrows Church in Fairfax, Va., to pray for an end to the death penalty in this 2017 file photo. The Virginia House of Delegates voted 57-41 to abolish the death penalty Feb. 5, 2021, two days after the Virginia Senate took the same action in a 21-17 vote. (CNS photo/Zoey Maraist, Catholic Herald)

ARLINGTON, Va. (CNS) — Both the Virginia House of Delegates and the Virginia Senate have now passed bills that would abolish the death penalty in the state.

According to Virginians for Alternatives to the Death Penalty, the commonwealth has executed 1,390 men and women since 1608, more than any other state.

A few more things must happen before capital punishment is banned. “The final step will be reconciling any differences between the House and Senate bills and sending a final version for Governor Ralph Northam to sign into law later in the spring,” the group said a news release.

In a Feb. 5 statement, Virginia Bishops Michael F. Burbidge of Arlington and Bishop Barry C. Knestout of Richmond welcomed the House of Delegates’ 57-41 vote, which followed by two days the Virginia Senate’s 21-17 vote to end the death penalty.

“We offer — and affirm the utmost need for — prayerful support for the families of victims of horrific crimes,” they said. “We also affirm, with clarity and conviction, the words of the Catechism of the Catholic Church,” which says the “death penalty is inadmissible because it is an attack on the inviolability and dignity of the person.”

“As Pope Francis, his predecessors and the U.S. Catholic bishops have consistently noted, we have other ways to provide punishment and protect society, without resorting to executions,” the statement continued. “We too have been consistently clear in our stand on the abolition legislation this year and on similar legislation in years past, and in our direct interventions before executions occurred in Virginia and at the federal level.”

The national organization Catholic Mobilizing Network said Feb. 5 it “rejoices with the state of Virginia” over lawmakers’ decision to end the death penalty, which it called a “racially biased and irreparably broken practice.”

“Today’s death penalty repeal in Virginia is an incredibly significant step toward prioritizing the creation of a more equitable and restorative criminal legal system,” executive director Krisanne Vaillancourt Murphy said in a statement. “We are grateful that Gov. Northam intends to sign the bill into law.”

She added: “As Catholics, we uphold that every person is endowed with a God-given dignity, regardless of the harm one has suffered or caused. The repeal of Virginia’s death penalty is a huge step toward protecting that sacred dignity of life.”

Many Catholics have prayed for years for an end to the death penalty. Often, at the time an execution was performed, Catholics would gather at prayer vigils around the area.

Bob More was involved with organizing four such vigils at St. John Neumann Church in Reston, Virginia, in the Arlington Diocese.

“They were very moving,” he said. “We would pray for the victim and their family and the accused and his or her family and the people that were carrying out the death sentence, and just that hearts would be changed all around, that our leaders would come to recognize the evil of state killing.

“It’s an incredible moment for Virginia,” More told the Arlington Catholic Herald, the diocesan newspaper. “To finally uphold the dignity of every person including those who offended against society in a serious way, and to recognize the death penalty has not been applied in a fair and defensible manner, and that people need an opportunity for rehabilitation and repentance.”

Parishioners of St. Mary of Sorrows Church in Fairfax, Virginia, also have hosted prayer vigils at their historic chapel. Christina Benedi, the parish outreach ministry coordinator, was glad to hear the news.

“As Christians, we value the sanctity of life from conception to natural death, and abolishing the death penalty supports this,” she said. “There are alternative punishments for heinous crimes, and hopefully, there will be additional future funding for increased mental health programs and treatments.”

Shari Zamarra, head of the Consistent Ethic of Life Team at Our Lady, Queen of Peace Church in Arlington, wished the General Assembly would do more to protect the taking of life.

“I’m just getting in touch with my representative and sending them a card with Catholic social teaching on it, because it’s very frustrating to have them pass laws with more access to abortion and at the same time abolition of the death penalty,” she said. “They’re not honoring the dignity of human life — they are in one case, but not in another.”