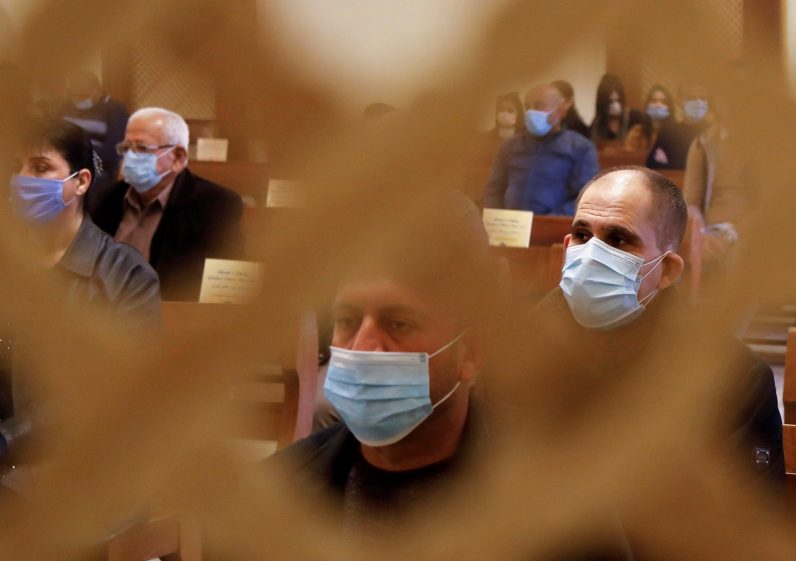 The trip’s papal logo reflects this, depicting Pope Francis with Iraq’s notable Tigris and Euphrates rivers, a palm tree and a dove carrying an olive branch over the Vatican and Iraqi flags. The motto: “You are all brothers,” is written in Arabic, Chaldean and Kurdish languages.

The first-ever papal visit to the biblical land of Iraq March 5-8 is significant. For years, the pope has expressed his concerns publicly for the plight and persecution of Iraq’s Christians and its mosaic of many religious minorities, including the Yazidis, who have suffered at the hands of Islamic State militants and have been caught in the crosshairs of Sunni and Shiite Muslim violence.

Tensions persist between Iraq’s majority Shiite and minority Sunni Muslim communities, with the latter now feeling disenfranchised following the 2003 downfall of Saddam Hussein, a Sunni Muslim who marginalized Shiites for 24 years under his minority rule.

“I am the pastor of people who are suffering,” Pope Francis told Catholic News Service at the Vatican ahead of his visit.

Earlier, the pope said he hoped Iraq could “face the future through the peaceful and shared pursuit of the common good on the part of all elements of society, including the religious, and not fall back into hostilities sparked by the simmering conflicts of the regional powers.”

“The pope will come to say, ‘Enough, enough war, enough violence; seek peace and fraternity and the safeguarding of human dignity,'” said Cardinal Louis Sako, the Baghdad-based patriarch of the Chaldean Catholic Church. The cardinal reportedly has worked for several years to see the pope’s trip to Iraq come to fruition.

Pope Francis “will bring us two things: comfort and hope, which have been denied to us until now,” the cardinal said.

The majority of Iraq’s Christians belong to the Chaldean Catholic Church. Others worship in the Syriac Catholic Church, while a modest number of belong to the Latin, Maronite, Greek, Coptic and Armenian churches. There are also non-Catholic churches like the Assyrian Church and Protestant denominations.

Once numbering about 1.5 million, hundreds of thousands of Christians fled sectarian violence after Saddam’s ouster as churches in Baghdad were bombed, kidnappings took place, and other sectarian attacks erupted.

They either headed north or left the country altogether. Christians were driven out of their ancestral homeland in the Ninevah Plain when Islamic State captured that region in 2014. A record number of Christians fled due to their atrocities until its liberation in 2017. Now, Christian numbers in Iraq have dwindled to about 150,000.

The uprooted Christian community, which claims an apostolic origin and still uses Aramaic, the language Jesus spoke, is desperate to see its plight end.

Chaldean Catholic Archbishop Yousif Mirkis of Kirkuk estimates that between 40%-45% of the Christians “have returned to the some of their ancestral villages, particularly Qaraqosh.”

There, rebuilding of churches, homes and businesses is taking place mainly with funding from Catholic and other church institutions as well as the Hungarian and U.S. governments, rather than from Baghdad.

For years, Cardinal Sako has lobbied the Iraqi government, dominated by majority Shiite Muslim politicians, to treat Christians and other minorities as equal citizens with equal rights. 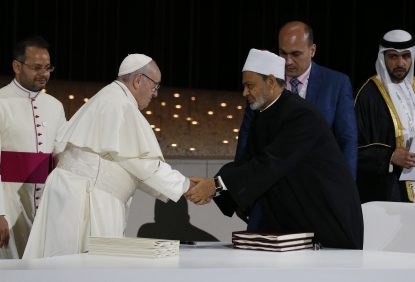 Pope Francis shakes hands with Sheik Ahmad el-Tayeb, grand imam of Egypt’s al-Azhar mosque and university, during a document signing at an interreligious meeting at the Founder’s Memorial in Abu Dhabi, United Arab Emirates, in this Feb. 4, 2019, file photo. Some hope the leader of Iraq’s Shiite Muslims also will sign onto the document during Pope Francis’ March 5-8 visit. (CNS photo/Paul Haring)

He also hopes that Pope Francis’ message of peace and fraternity in Iraq will cap the pontiff’s interfaith outreach to the Muslim world in recent years, now by extending a hand to Shiite Muslims.

“When the head of the church speaks to the Muslim world, we Christians are shown appreciation and respect,” Cardinal Sako said.

A meeting for Pope Francis with one of Shiite Islam’s most authoritative figures, Ayatollah Ali al-Sistani, is significant in the papal effort to embrace all of the Islamic world. The meeting has been confirmed by the Vatican.

Iraqi Dominican Father Ameer Jaje, an expert on Shiite relations, said a hope would be for Ayatollah al-Sistani to sign onto a document, “On Human Fraternity for World Peace and Living Together,” which calls for Christians and Muslims to work together for peace.

A highlight of Francis’ visit to the United Arab Emirates in February 2019 was the signing of the fraternity document together with Sheikh Ahmad el-Tayeb, grand imam of al-Azhar University and the top authority in Sunni Islam.

Father Jaje told CNS by phone from Baghdad that “the meeting will certainly take place in Najaf, where al-Sistani is based.”

The city is 100 miles south of Baghdad, a center of Shiite Islam’s spiritual and political power as well as a pilgrimage site for Shiite adherents.

Long considered a force for stability despite his age of 90, Ayatollah al-Sistani’s loyalty is toward Iraq, as opposed to some co-religionists who look to Iran for backing. He supports the separation of religion and state affairs. In 2017 he also urged all Iraqis, regardless of their religious affiliation or ethnicity, to fight to get rid of Islamic State on behalf of their country.

Observers believe the pope’s meeting with the ayatollah could be highly symbolic for Iraqis, but especially Christians, for whom the encounter could turn a page in their country’s often fraught interfaith relations.