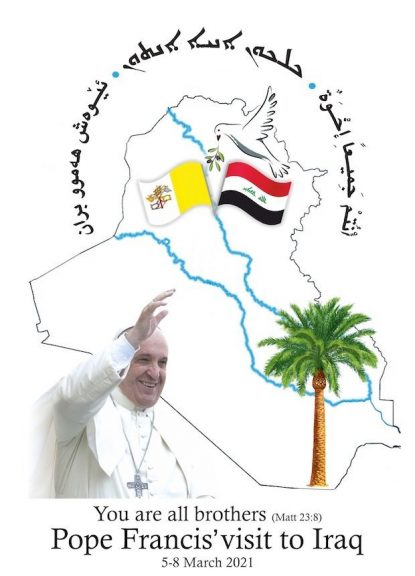 VATICAN CITY (CNS) — Pope Francis said his upcoming trip to Iraq would be an important sign of his concern for the region’s Christians, but also an important opportunity to build fraternity through interreligious dialogue.

“In our time, interreligious dialogue is an important component of the encounter between peoples and cultures. When it is viewed not in terms of compromising our own identity but as an occasion of mutual understanding and enrichment, dialogue can become an opportunity for religious leaders and the followers of different confessions, and can support the responsible efforts of political leaders to promote the common good,” the pope told ambassadors to the Holy See Feb. 8.

A few hours later, the Vatican released the initial schedule for the pope’s trip to Iraq March 5-8. The schedule listed planned events and cities but did not provide specific times for any of the events.

As Cardinal Louis Sako, the Baghdad-based patriarch of the Chaldean Catholic Church, told reporters Jan. 28, Pope Francis plans to meet March 6 with Ayatollah Ali al-Sistani, leader of the country’s Shiite Muslim majority and then to hold an interreligious meeting with Christians, Muslims and Yazidis on the plain of Ur, widely recognized as the homeland of the patriarch Abraham.

Throughout the trip the pope will pay homage to the victims of war and persecution in the country. He will meet March 5 with clergy and religious at the Syriac Catholic Cathedral of Our Lady of Deliverance in Baghdad, which was the site of a massacre in 2010 by members of the Islamic State; two priests and close to 60 other worshippers were killed.

The pope also will travel to the autonomous region of Kurdistan and to Qaraqosh, which, before it was invaded by Islamic State fighters in 2014, was home to Iraq’s largest Christian community. 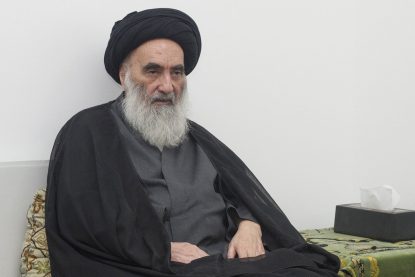 Iraq’s top Shiite cleric, Ayatollah Ali al-Sistani, is pictured during a meeting with then-U.N. Secretary-General Ban Ki-moon in Najaf, Iraq, in this July 24, 2014, file photo. Pope Francis is scheduled to meet with al-Sistani during his March 5-8, 2021, visit to Iraq. (CNS photo/Eskinder Debebe/United Nations via Reuters)

Here is the pope’s initial schedule as released by the Vatican Feb. 8:

— Meeting with authorities, civil society leaders and members of the diplomatic corps in the hall of the presidential palace. Speech by pope.

— Meeting with bishops, priests, religious men and women, seminarians and catechists in the Syriac Catholic Cathedral of Our Lady of Deliverance. Speech by pope.

— Morning, Departure by plane for Najaf.

— Departure by plane to Nasiriyah.

— Interreligious meeting on the plain of Ur. Speech by pope.

— Departure by plane for Baghdad.

— Afternoon, celebration of Mass in the Chaldean Catholic Cathedral of St. Joseph. Homily by pope.

— Morning, Departure by plane for Irbil.

— Arrival at Irbil airport. Welcome from the religious and civil authorities of the Autonomous Region of Iraqi Kurdistan in the presidential VIP lounge at the airport.

— Departure by helicopter for Mosul.

— Memorial prayer for the victims of the war at Hosh al-Bieaa (church square) in Mosul. Prayer of the pope.

— Departure by helicopter for Qaraqosh.

— Visit with the community at the Church of the Immaculate Conception. Speech by pope.

— Recitation of the Angelus prayer.

— Departure by plane for Rome.

NEXT: Naming posts for synod, Pope Francis gives a woman a vote