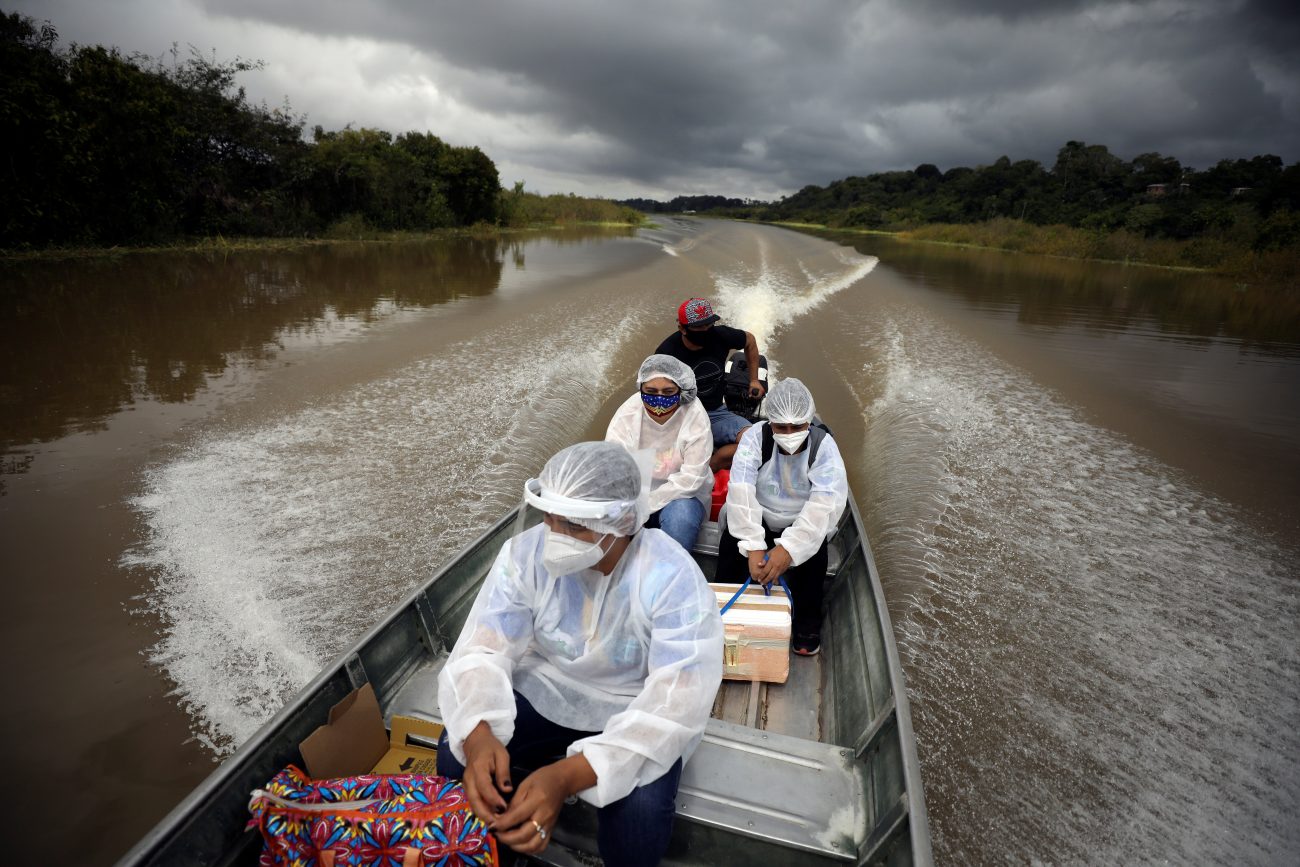 Municipal health workers travel on a boat along the Solimoes River to apply the Oxford-AstraZeneca vaccine for COVID-19 to the residents who live along the river in Manacapuru, Amazonas state, Brazil, Feb. 1, 2021. (CNS photo/Bruno Kelly, Reuters)

VATICAN CITY (CNS) — The hurdles on the path toward a fair, global distribution of the COVID-19 vaccine are economic, technical, political and moral.

The difficulty of vaccine rollouts even in the world’s richest countries demonstrates what a daunting task it is to quickly get the inoculations into the arms of as many people as possible.

On Christmas, when only a few countries had just begun vaccinating health care workers and the elderly, Pope Francis called the shots “lights of hope,” but, he said, “for these lights to illuminate and bring hope to all, they need to be available to all.”

The pope denounced as a form of “nationalism” the rush of wealthy nations to secure the initial production of doses for their own populations.

And, he said, with a global health crisis threatening the lives of millions of people, “the law of the marketplace and patents” should not “take precedence over the law of love and the health of humanity.”

Father Augusto Zampini, a member of the directorate of the Vatican COVID-19 Commission, said patents ensure rewards for human ingenuity and investment, “but at present what we need is an urgent innovation for the common good” and not just for pharmaceutical companies and investors.

In addition, he said, “if most of the money is public money,” then the resulting vaccine “should be considered a public good.”

In the poorest parts of the world, especially where people are facing the threat of war and starvation, vaccinations are not on the horizon, although malnutrition means the people are even more susceptible to the coronavirus.

Many people in the Nuba Mountains, Sudan, are “moving skeletons” and their compromised immune systems expose them “to all kinds of diseases, not just COVID-19,” retired Bishop Macram Max Gassis, who lives in Nairobi, Kenya, said in a Feb. 4 interview. But there are few tests available, and no one is talking about vaccines yet.

A key sticking point is that the world’s wealthiest countries bought massive amounts of vaccine doses before the vaccines even proved effective and safe. The pre-purchase agreements, worth billions of dollars, provided the investment money the pharmaceutical companies needed to develop the vaccines in the first place.

The drug companies have not be able to manufacture all the doses needed to fulfill the pre-orders, but the rollout in wealthy nations of what they did have available shows other difficulties likely to arise in a global distribution: first, the need to keep the vaccines cold or super-cold from production until delivery to a vaccination clinic; the need for ethical criteria in deciding who gets vaccinated first; the challenge of setting up venues for quick, orderly vaccinations; and the need to educate people about why they should be vaccinated.

Large-scale, equitable vaccination is important for everyone’s safety and well-being. If no one traveled anywhere, countries could create vaccination bubbles, but the global economy depends on the movement of goods and people, the same people who spread the coronavirus.

One way poorer countries — and some wealthier ones as well — will get the vaccine is through a large, group purchase by COVAX, the COVID-19 Vaccines Global Access Facility, which is led by the World Health Organization, the Coalition for Epidemic Preparedness Innovations and Gavi, the Vaccine Alliance. The wealthier COVAX partners will purchase their doses outright while donations from other governments and private foundations will fund the vaccines for the poorer countries.

The Congregation for the Doctrine of the Faith, in a December statement focused on the moral question of how various COVID-19 vaccines were being developed, also looked at the morality of how they would be distributed.

“There is also a moral imperative for the pharmaceutical industry, governments and international organizations to ensure that vaccines, which are effective and safe from a medical point of view, as well as ethically acceptable, are also accessible to the poorest countries in a manner that is not costly for them,” said the statement, published Dec. 21.

Without making the vaccines available and affordable, the statement said, they will “become another sign of discrimination and injustice that condemns poor countries to continue living in health, economic and social poverty.”

Israel, which in early February was leading the world in the percentage of its population vaccinated, also was being sharply criticized by human rights groups and U.N experts for allegedly shirking its responsibility to provide vaccines for Palestinians in the West Bank and Gaza.

“The bottom line is that Palestinians in the Occupied Territories are occupied by Israel, and it is responsible as the occupying power to provide health care services for the occupied people,” said Rita Giacaman, a Palestinian and professor of public health at Bir Zeit University.

As even the wealthiest countries struggle to procure enough doses of the vaccine and to distribute them in a fair and orderly manner among their populations, the leadership of Caritas Internationalis and the Vatican Dicastery for Promoting Integral Human Development issued a call for concrete action, including by the U.N. Security Council.

In a statement Feb. 5, they urged the Security Council to act since vaccine access is “a global security problem” requiring “firm political decisions based on multilateralism.”

They also urged international action to forgive or reduce the foreign debt of the world’s poorest countries so the money could be used “to upgrade the medical and health systems in these countries.”

One of the biggest challenges to making the vaccines widely available is that they are produced only by a few companies in a few countries; the formulas are protected by patents, which allow the companies that invested in their development, to be rewarded for their work. But the patents also prevent lower-cost manufacturing and distribution of the vaccines in the poorer countries that need them as well.

Caritas and the dicastery, in their February statement, urged the companies and the international community to “promote the local production of vaccines in different technical hubs in Africa, Latin America and Asia” and to “make them available in the next six months by addressing the issue of patent and technical collaboration with the poorer nations.”

And, finally the statement asked for financial and technical support for local organizations, including faith-based organizations, that can educate communities about the importance of vaccination.

Ravi Tripptrap, executive director of Malteser International Americas, the relief agency of the Knights of Malta, told CNS that churches and faith-based organizations can play a critical role, especially with vulnerable populations, in helping governments with vaccine rollouts.

“The networks faith-based organizations have and the trust they have built up over the years is the most important access point to these communities,” he said.

Contributing to this story were Bronwen Dachs in Cape Town, South Africa; Judith Sudilovsky in Jerusalem; and Lucien Chauvin in Lima, Peru. 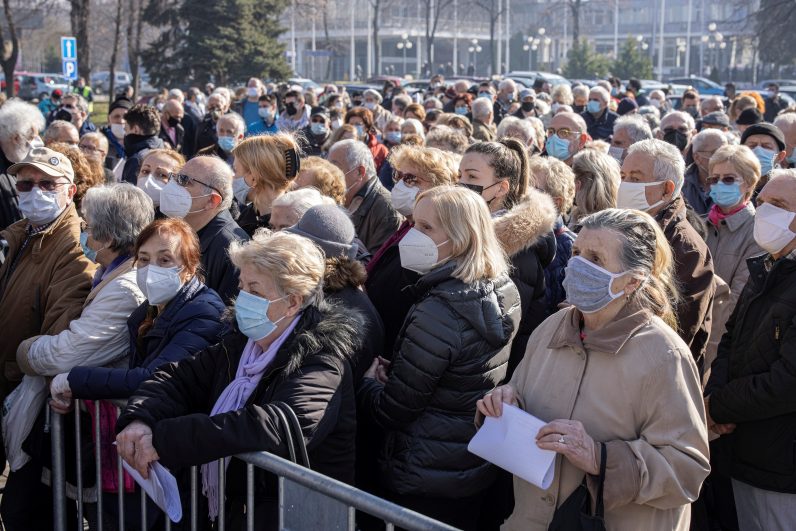 NEXT: CRS shifts into gear to help during ‘crisis on top of other crises’