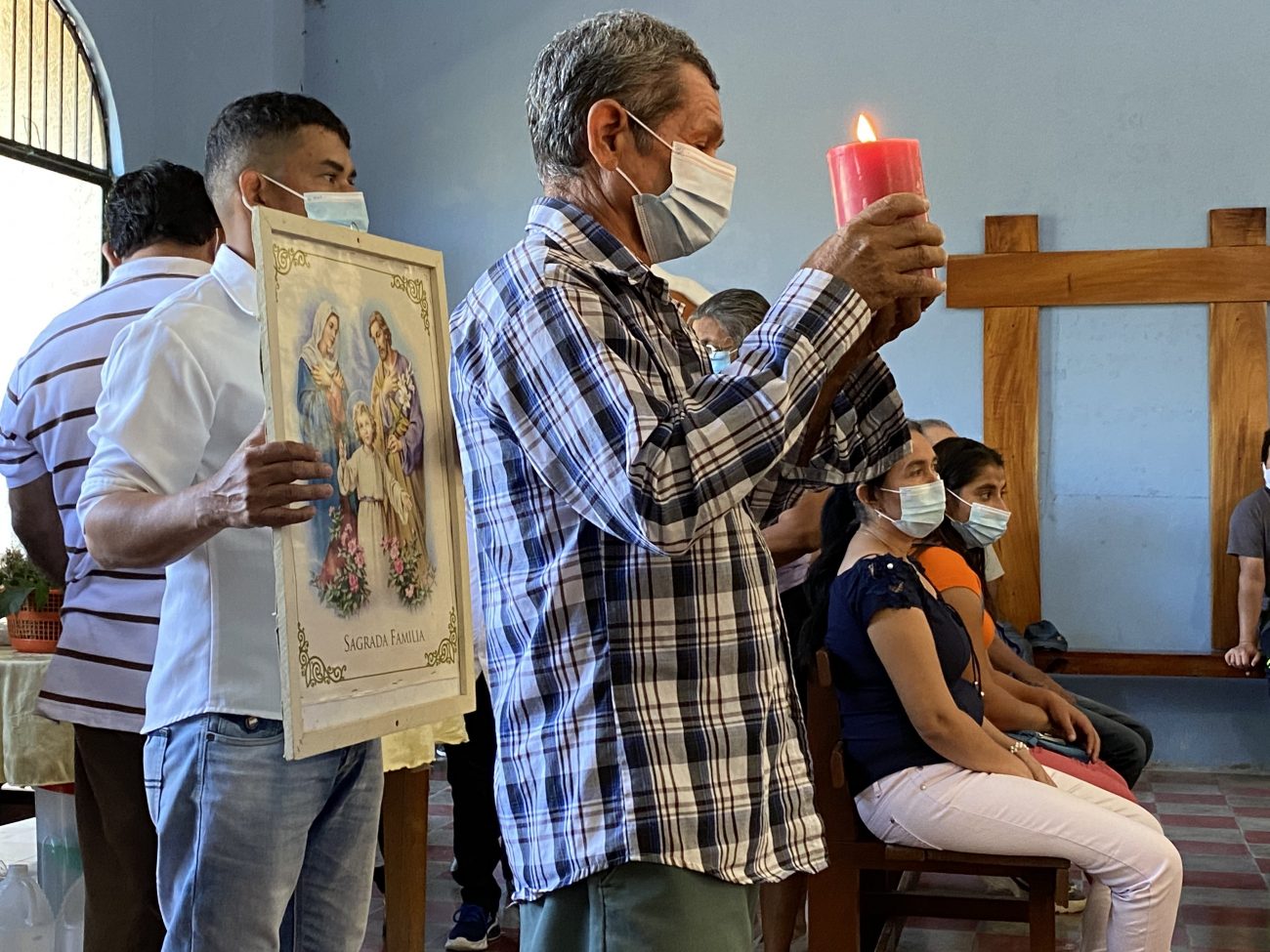 A group of men gather with the offertory at the entrance of a church in Arcatao, El Salvador, Feb. 2, 2021 during Mass amid the COVID-19 pandemic. Jesuit Father Miguel Vasquez thanked Catholic Relief Services, the U.S. bishops' overseas relief and development agency, for providing the personal protective equipment that has kept many safe in the remote community in northern El Salvador. (CNS photo/Rhina Guidos)

CHALATENANGO, El Salvador (CNS) — Though COVID-19 seems like the global enemy to defeat, for aid organizations such as Catholic Relief Services, it is simply another crisis to respond to, said Bill O’Keefe, executive vice president for mission and mobilization for the international agency.

In a Feb. 6 online presentation during the 2021 Catholic Social Ministry Gathering, O’Keefe spoke of the trying year for the organization, which already was helping communities battling multiple problems — droughts, civil conflict, hunger — in the 114 countries where it operates.

“Our colleagues have had a difficult year but are still hard at work,” said O’Keefe, showing slides of staffers or local partners working during floods or distributing food and equipment while trying to establish social distancing among its beneficiaries.

O’Keefe spoke of the work of CRS during a Zoom presentation organized by the Department of Justice, Peace and Human Development of the U.S. Conference of Catholic Bishops.

This year’s virtual gathering of U.S. Catholic social ministry leaders was co-sponsored by 10 USCCB departments and 18 national Catholic organizations, which carried the event online this year.

CRS is the official relief and development organization of the Catholic community in the United States and was founded by the Catholic bishops in 1943 in response to World War II, he explained.

“The pandemic has had an unbelievable impact on poor and vulnerable people around the world,” he said.

With hunger already on the rise, the pandemic is “a crisis on top of other crises in parts of Africa, Latin America and Asia,” O’Keefe said. For some communities in Africa, the COVID-19 pandemic shares the space with several “shadow” pandemics, O’Keefe said, and those include civil unrest, drought, and in some cases, locust infestations.

Apart from health risks, the COVID-19 pandemic has prevented people from working, planting and harvesting, disrupting supply chains, adding to the problems of securing food.

But CRS has done its best to adapt by working with local communities, including many in remote locations, and even some refugee camps, providing equipment as well as education about how to observe proper sanitation to stay healthy during the pandemic.

Some of that involves providing water, sanitation stations, in places where the equipment may not be readily available. The agency also has been “very active in promoting the truth and accuracy” about what’s helpful and what isn’t and battling disinformation arising from the global health crisis, he said.

O’Keefe showed photos of men and women waiting for food or other services inside predesignated circles that keep them 6 feet apart, trying to provide aid as well as safe conditions to gather in order to receive help.

“We try to do everything we can to make sure that we’re not contributing to the problems that folks are facing,” he said.

He said the agency now is working with other countries, local ministries of health, Catholic health clinics and hospitals and others, to prepare for COVID-19 vaccine distributions, ensuring the most vulnerable populations, particularly in remote locations that get ignored, will get access to vaccines as they become available.

Also, during the Feb. 6 event, Cardinal Luis Antonio Tagle, prefect of the Congregation for the Evangelization of Peoples, addressed the virtual attendees.

He spoke about the pope’s encyclical “Fratelli Tutti” in light of the work of the church highlighted in the virtual conference.

NEXT: Pandemic shows need for new model of care for elderly, academy says