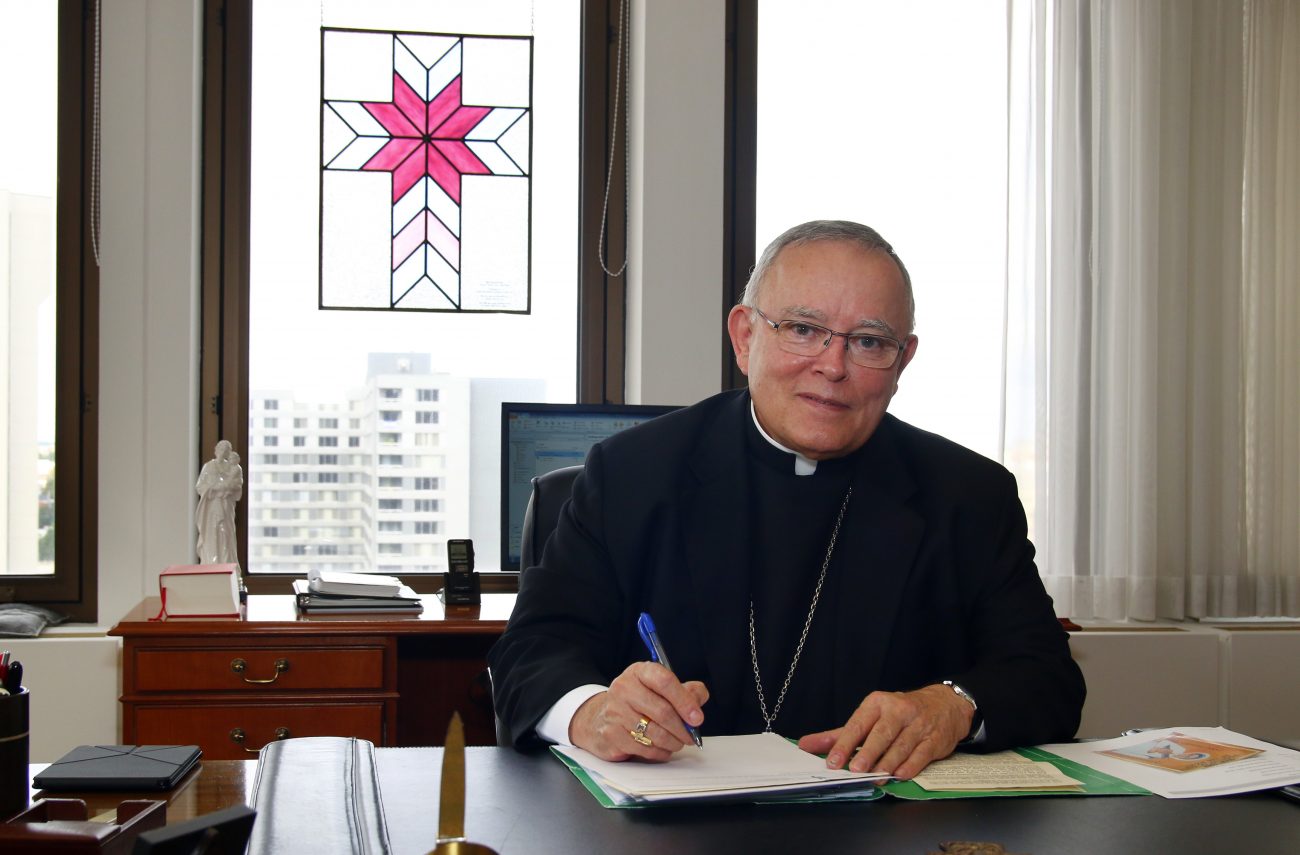 Now-retired Philadelphia Archbishop Charles J. Chaput is seen in this 2016 file photo. He is the author of the book "Things Worth Dying For: Thoughts on a Life Worth Living." (CNS photo/Sarah Webb, CatholicPhilly.com)

WASHINGTON (CNS) — On a practical level, retired Archbishop Charles J. Chaput of Philadelphia said he wrote his new book, “Things Worth Dying For: Thoughts on a Life Worth Living,” because his publisher was actively “trying to get me to write in my old age.”

He has three previous books — on living the Catholic faith in a post-Christian world, rediscovering the basics of the faith and living our Catholic beliefs in political life to serve the nation.

In his new 240-page work, just published by Henry Holt, he tackles life’s central questions: why we’re here, how we can “live and die meaningfully” and “the important things we Christians should be willing to die for.”

Archbishop Chaput told Catholic News Service he hopes that after reading his latest book, “anybody who is a serious Christian will take the Gospel more seriously, their lives more seriously and the world around us more seriously.”

As he writes in the book, “Like it or not, we matter. So do our actions.”

He shares reflections from his life, including his boyhood in Kansas, and ministry as a Capuchin Franciscan priest, a bishop and an archbishop.

Now 76, Archbishop Chaput retired as Philadelphia’s shepherd just over a year ago — he turned in his resignation at 75, the age at which canon law requires it. He headed the archdiocese for about nine years, after 14 years as Denver’s archbishop. Before that he was the bishop of Rapid City, South Dakota, from 1988 to 1997.

A registered member of the Prairie Band Potawatomi Nation, he was the second Native American to be consecrated a bishop in the United States and is the first Native American archbishop. 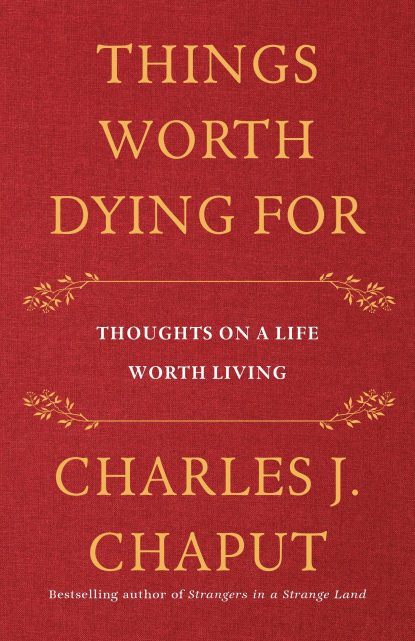 This is the cover of the book “Things Worth Dying For: Thoughts on a Life Worth Living” by retired Archbishop Charles J. Chaput of Philadelphia. (CNS photo/courtesy Henry Holt and Company)

Ordained a priest Aug. 29, 1970, he has been a pastor and also served his order in several capacities, including being appointed chief executive and provincial minister in 1983. Five years later, he was named a bishop.

The archbishop was raised in Concordia, Kansas, which to many is “flyover country” but is a place where a “child’s imagination could run free,” he writes, and where his love for books and movies took root. He and his two siblings were raised by a mom and dad “who were strong examples of Catholic faith. … Religion was central to our family.”

He also grew up understanding death was a part of life. His father was the town mortician. The Chaput family lived upstairs from the funeral parlor, and when he was older, he would sometimes help his father receive the deceased. “There was nothing dark about it,” he writes.

The pandemic has illustrated with “brutal clarity” how painful and sorrowful death can be, he said, but Christians believe death is not the end of suffering but the beginning “of endless joy.”

Thinking about death puts life in perspective. How will we be judged when our journey ends, Archbishop Chaput asks. Did we live selflessly for others? Did we do what is morally right? Did we reject society’s materialism and its focus on “me” to live for our family? Did we do enough to serve God?

Archbishop Chaput writes about two of his favorite saints, the 16th-century martyrs St. Thomas More, a layman, and St. John Fisher, a bishop. Using as an example their willingness to suffer for their Catholic faith in defiance of King Henry VIII, the archbishop drives home how much U.S. society today needs Christian witness to moral truths and traditional values, such as family and marriage.

The U.S. is “a great and, in its best ideals, a good nation,” he writes, but it also is “a nation of chronic racial injustice, deep sexual dysfunctions, self-flattering elites, great disparities in wealth, and the intentional destruction of more than 50 million unborn children.”

“We’re in bad shape” as a nation, he told CNS. “I didn’t want to minimize it. The best place to begin is the truth. But because we’re Christians, there’s always hope … in God. We can be pessimistic about the future, but we must always have hope. Hope gives us joy.”

He devotes part of a chapter to answers he received from several dozen women and men — clergy, lay and religious — to whom he sent several questions, including what they think of the Catholic Church, the role faith plays in their lives and what brings them joy.

His respondents movingly describe what their faith means to them, but they also are not shy about criticizing church leaders, particularly with regard to the clergy abuse scandal.

Of any institution, the Catholic Church has done more to address the sex abuse issue and now is “in a better place in terms of rules and regulations,” Archbishop Chaput told CNS, but there’s a “long way to go in healing.”

And at a time when the church’s moral authority on human sexuality is most needed, “the church has the least credibility,” he added.

Throughout the book, Archbishop Chaput quotes philosophers, historians, scholars, popes and poets. His references range from the 11th-century epic poem “The Song of Roland” and to the classic 1942 film “Casablanca” — a favorite of his from among hundreds of movies he said he has seen.

“Especially in Chapter 1, I talk about the importance of memory and history,” Archbishop Chaput told CNS. “Not only does knowledge of history keep us from making the same mistakes, it also can inspire us to help us to find answers to contemporary problems. Since human beings are human beings, the issues we deal with today, to a great extent, are human issues that have been part of our human experience from the beginning.”

The current “cancel culture” that seemingly aims to erase history is “extraordinarily dangerous,” he said. “There is an arrogance in that thinking, that our time or our opinion is so superior to others that it should dominate.”

In his youth, he said, “there were no fewer sinners … but there was a general pride enunciated in the Judeo-Christian principles the country was founded on. … It seems to me now there’s a greater proportion of society who don’t accept those principles,” Archbishop Chaput said. “So few of our own baptized people go to church.”

“We can’t save anybody,” only God can, he said. “Jesus saves,” but we must “make the Gospel attractive by living it faithfully and joyfully and make sure people hear it,” he added. “God will do his work if we preach the Gospel, take it to all corners.”

Jesus never promised the church “would be big but that it would always be around,” Archbishop Chaput said. “We’re just part of it — salted by the church, but not everyone is a salter.”

As Christians, “we must be salted,” he remarked, and also “bring that gusto to others by living and preaching the Gospel clearly.”