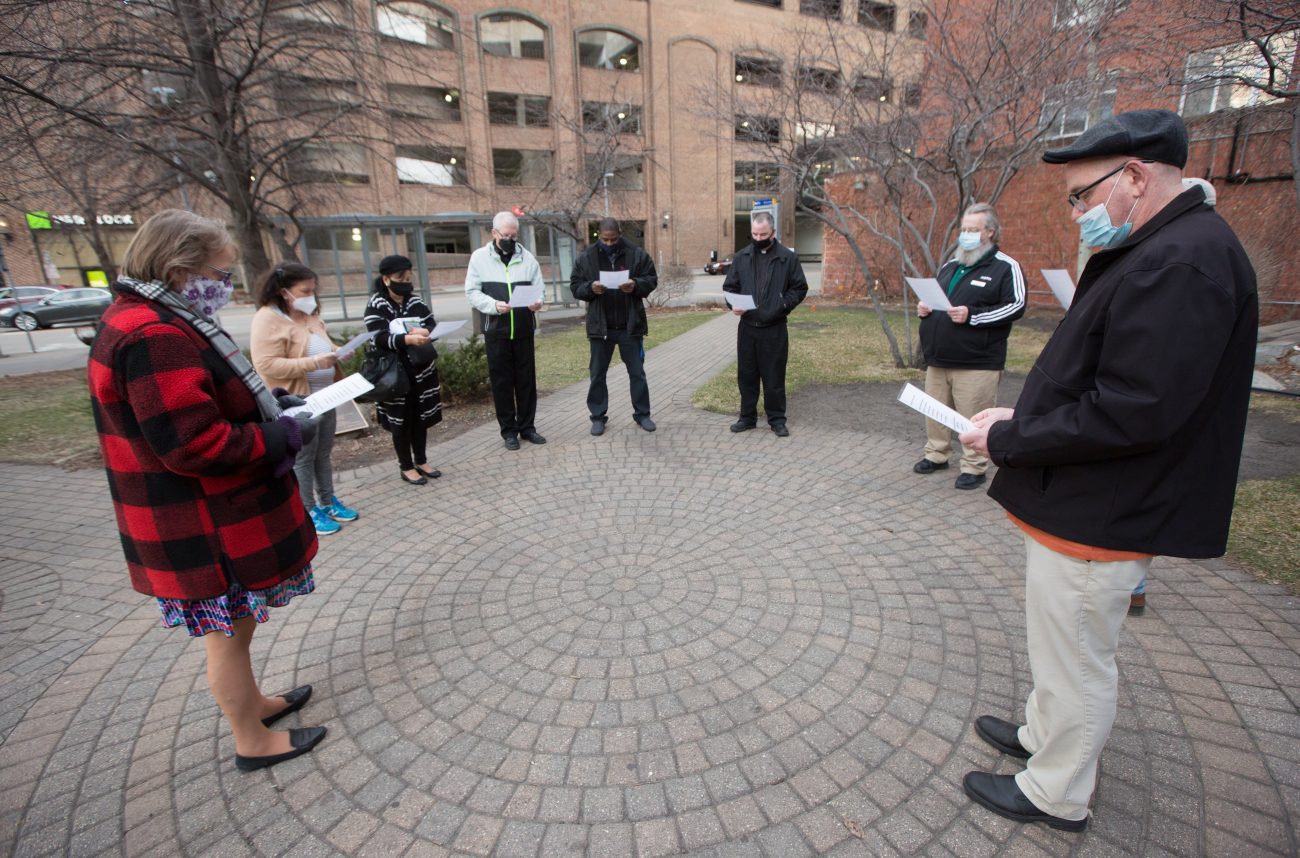 ST. PAUL, Minn. (CNS) — Just before 8 a.m. March 22, nine people gathered outside St. Olaf Parish in downtown Minneapolis in a garden dedicated to St. Francis to pray that saint’s famous prayer: “Lord, make me an instrument of your peace.”

A small, ever-changing group has been gathering to offer the prayer on weekdays since March 8, the day before jury selection began for the trial of former Minneapolis police officer Derek Chauvin, who has been charged with murder in last year’s death of George Floyd.

The gathering as well as praying of the Divine Mercy chaplet at 3 p.m. weekdays at the church are small but significant ways parishioners are responding to the rising tension as the March 29 start of Chauvin’s trial neared.

“We’re here in the heart of it,” said Father Kevin Kenney, pastor.

The parish is blocks from the Hennepin County Government Center, where the trial will occur. The church is open but prepared to board its windows if necessary.

Last summer, riots broke out in sections of Minneapolis and St. Paul — and elsewhere — following Floyd’s May 25 death. A widely seen video shows a Black man who had been arrested for trying to pass a counterfeit $20 bill at a convenience store handcuffed and lying facedown on the ground next to a police car, with Chauvin, who is white, kneeling on his neck. Floyd repeatedly said, “Please, I can’t breathe” before losing consciousness.

Protests surrounding Floyd’s death focused on the incident as an act of racism and police brutality.

Twin Cities residents and leaders have voiced concerns that Chauvin’s trial — whatever the outcome — could stoke a repeat of last year’s violence. Archbishop Bernard A. Hebda of St. Paul and Minneapolis joined other faith leaders March 7 to pray for justice and peace outside of the Hennepin County Government Center, which was barricaded ahead of the trial.

St. Peter Claver Church, St. Paul’s historically African American parish, sits along the edge of the city’s Midway neighborhood, which was badly damaged last year by vandalism and fire. Its pastor, Father Erich Rutten, said when it comes to fears of rioting, the parish is praying for the best outcome but is prepared for the worst.

As the trial neared, the parish called for prayers for peace and justice. It also turned attention to larger issues of historic police brutality against African Americans and other forms of racism.

Peace cannot come soon enough for Father Leo Schneider, pastor of Holy Name and St. Leonard of Port Maurice parishes in south Minneapolis. Holy Name is five blocks from where Floyd died. Father Schneider has watched the site transition from a “shrine” to the center of what has been described as an “autonomous zone,” rife with criminal activity yet no longer patrolled by police.

Traffic in the immediate vicinity has been blocked, but neighbors now fear carjackings and feel unsafe when walking through the area. Rather than a memorial, the priest said, “It’s more of a crime scene.”

“I think we can say there has been a lot of darkness around us living so close to where George Floyd died. … These are all acts of darkness being hidden under the darkness of a no-go-zone,” he said in a homily March 14. “Violence begets violence, forgiveness begets forgiveness and opens the door to love. Love replaces the fist with handshakes, divisions become unity and war turns into peace.”

Next door to Holy Name is Risen Christ Catholic School, a Spanish-English immersion school. Michael Rogers, the school’s president, said increased crime in the neighborhood has caused the school to take extra precautions, but that he has no new concerns about student safety.

However, he and other staffers are attuned to the school community’s anxiety. About 99% of its 322 students are students of color, and most of its families are Latino. Many were directly affected by last year’s riots, he said.

On March 9, Rogers and Principal Joelynn Sartell sent a letter to families letting them know the school is working with other churches, schools and law enforcement to monitor “anything which might disturb the learning environment at Risen Christ.”

Ryan Hamilton, an African American attorney, said that he has watched police near his home in north Minneapolis fortify their building, and wonders if he should be preparing his own home for rioting. Last year, he and his wife took their young children to stay with grandparents away from the city during riots in their neighborhood.

A parishioner of Our Lady of Lourdes Parish in Minneapolis, Hamilton said last year’s incidents were “surreal,” noting he witnessed a police squad car blown up in a parking lot.

“We live in a fallen world and fallen humanity, so there are individuals among us and groups that just thrive on chaos,” he said. “So, there is going to be a group that, regardless of what happens in terms of a verdict … they’re going to flip it and spin it into an opportunity to create some chaos.”

He sees a role for the Catholic Church to offer calm in the chaos and create spaces where people can be heard in their grief, fear, anger and frustration, without agenda.

“Our duty is to think of this … as Catholics first and reaffirm our identity as Catholics,” he said regarding people’s responses to the social issues at play. “And then pray, so we root ourselves in our faith principles. Make an intentional effort to approach this as a Catholic first and pray, ‘Lord, what do I do?’ … This is beyond us as individuals.”

NEXT: Archbishop’s book tackles things ‘Christians should be willing to die for’