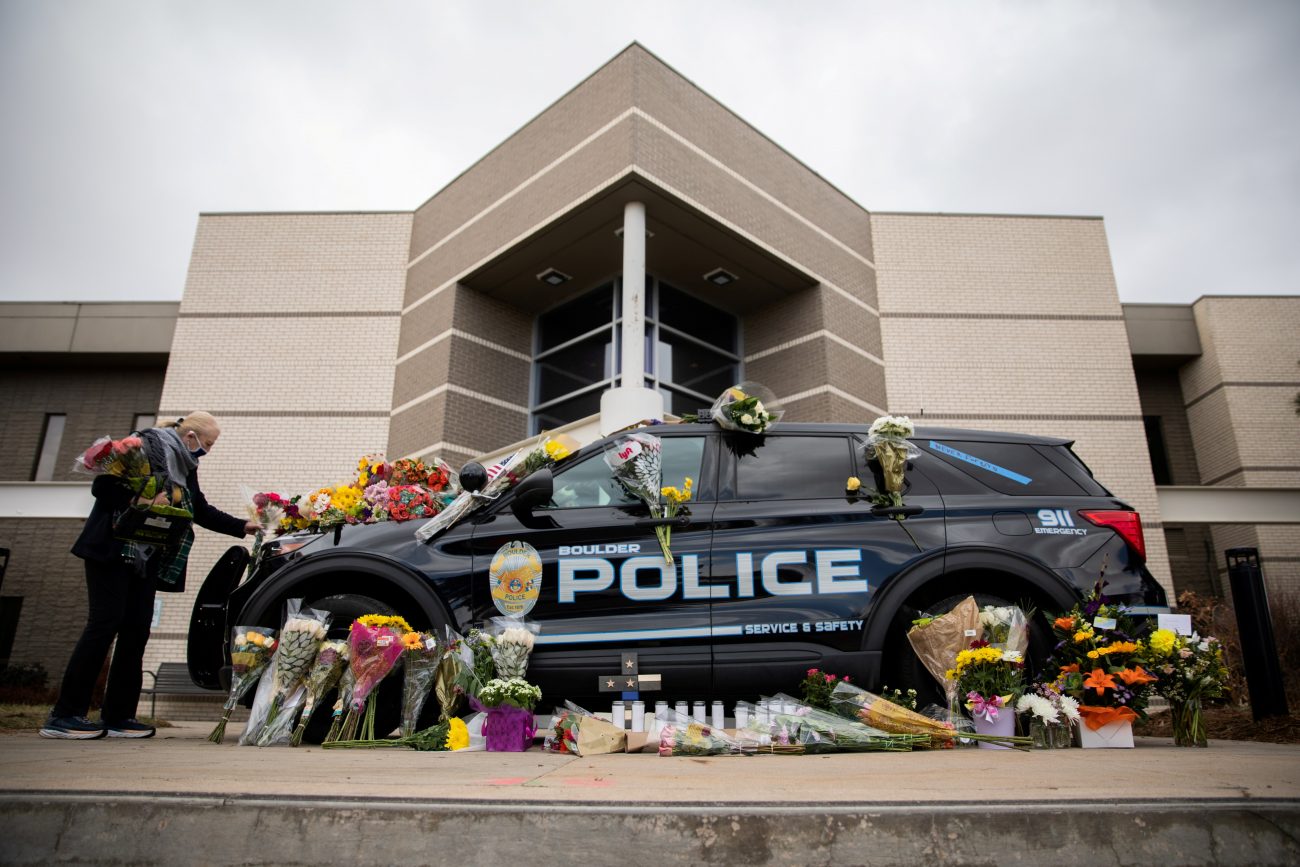 Veronica Hebert of Boulder, Colo., places flowers on the car of Officer Eric Talley March 23, 2021, who was killed the previous day during a mass shooting at the King Soopers grocery store. (CNS photo/Alyson McClaran, Reuters)

BOULDER, Colo. (CNS) — Officer Eric Talley, an 11-year veteran of the Boulder Police Department, was the first to arrive at the scene of a mass shooting at a King Soopers grocery store the afternoon of March 22 and the first of 10 to be killed.

A Catholic family man who took his faith seriously, Talley often stopped by St. Martin de Porres Church just across the street from the store “and participated in its events, even though he wasn’t a parishioner there,” Denver Archbishop Samuel J. Aquila said.

“St. Martin de Porres, the patron of the parish, was someone who experienced tragedy and hardship in his life, and so, we ask for his intercession in these difficult circumstances, that God would bring good out of this great evil,” he added in a statement issued late March 23.

Archbishop Aquila said he was “deeply saddened by the tragic and sudden deaths” of the 10 shooting victims. “I have been praying for all those impacted by this senseless act of violence and want to express my spiritual closeness to them,” he said.

Police arrested 21-year-old Ahmad Al Aliwi Alissa of Arvada, Colorado. He was treated at a local hospital for a gunshot wound to the leg, then booked into the Boulder County Jail. He was charged with 10 counts of first-degree murder and one count of attempted murder. So far his motive for the shooting rampage is not known.

Citing Colorado Judicial Branch online records, CNN reported that Alissa’s first court appearance has been scheduled for the morning of March 25. CNN also said the warrant for his arrest “described Alissa as being armed with either an assault rifle or ‘black AR-15’ and wearing a ‘tactical’ or ‘armored’ vest.”

The Denver Post daily newspaper reported the alleged shooter, whom witnesses said was wearing black and shooting “a rifle of some kind,” began shooting outside one of the store’s entrances and then entered the store shooting. One witness said he didn’t say a word.

The New York Post daily newspaper March 24 quoted the alleged shooter’s older brother, Ali Aliwi Alissa, 34, as saying the younger Alissa was bullied in high school for being Muslim and in the past few years had grown “increasingly paranoid” and anti-social, but that he had never heard the 21-year-old threaten violence. The family had emigrated from Syria when the alleged shooter was 3.

“Along with the rest of the community, we are waiting for more details on those who have passed away,” Archbishop Aquila said in his statement, adding that Talley “has been described as a man of character and strong faith, a loving father to seven children, a husband who cared deeply for his family and a soldier for Christ.

“My prayers and those of the faithful of the Archdiocese of Denver are with the Talley family and all who have died.”

The archbishop said that while it is still not known what led “to this terrible event, incidents like this have become far too common in our country and our state.”

“We must work to promote deeper conversion of hearts so that our lives are characterized by the virtue of charity,” he said, “which allows us to love God and our neighbor, strengthening the fabric of society and preventing senseless acts of violence such as this one.”

St. Martin de Porres Church announced it would hold an early evening prayer service March 24 for the shooting victims, with adoration of the Blessed Sacrament, a rosary, a Scripture reading and a reflection by Father Emmanuel Osigwe, parochial vicar.

Boulder Police Chief Maris Herold told reporters at a March 22 news conference that Talley “loved this community and he’s everything that policing deserves and needs.”

Herold said Talley went into police work to pursue a “higher calling.” Some news reports said he left a good career in information technology to become a police officer. Other reports said he was training to be part of a drone unit to have a safer job in the department.

“My heart is broken. I cannot explain how beautiful he was and what a devastating loss this is to so many,” his sister Kirstin tweeted about her big brother, who was 51. “Fly high my sweet brother. You always wanted to be a pilot (damn color blindness). Soar.”

Talley’s father, Homer Talley, said in a statement reported by various news outlets that his son “took his job as a police officer very seriously” and “loved his kids and his family more than anything.”

Homer Talley also told a local TV station that in a recent conversation the two had, his son said “he would lay down his life for any of the officers that he worked with.” Talley and his wife, who has not yet been identified, had seven children ages 5 to 18.

Colorado is no stranger to mass shootings. On April 20, 1999, students Dylan Klebold and Eric Harris at Columbine High school in the Denver suburb of Littleton went on a shooting rampage, killing 12 students and one teacher and injuring 21 others before taking their own lives.

He was tried nearly three years later. He confessed to the shooting but pleaded not guilty by reason of insanity. On Aug. 7, 2015, he was sentenced to life in prison without the possibility of parole. On Aug. 26, he was given 12 life sentences, one for every person he killed; he also received 3,318 years for the attempted murders of those he wounded and for rigging his apartment with explosives, which, according to news reports, he hoped would kill police when they went searched the place. 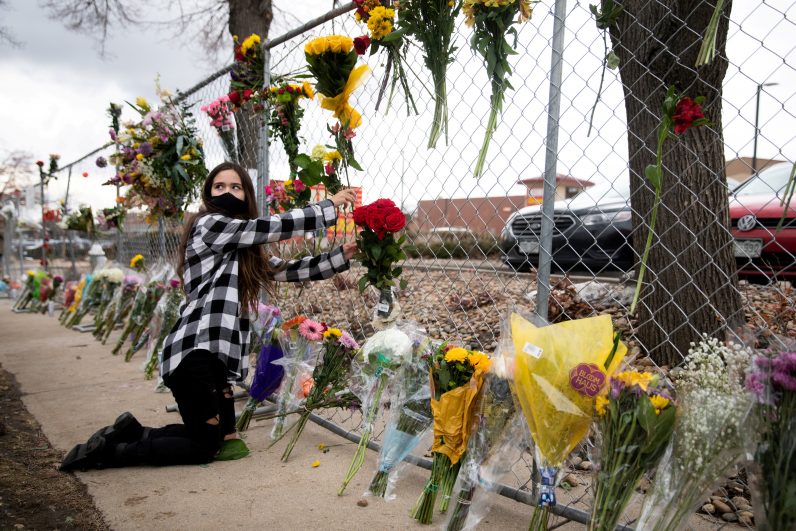