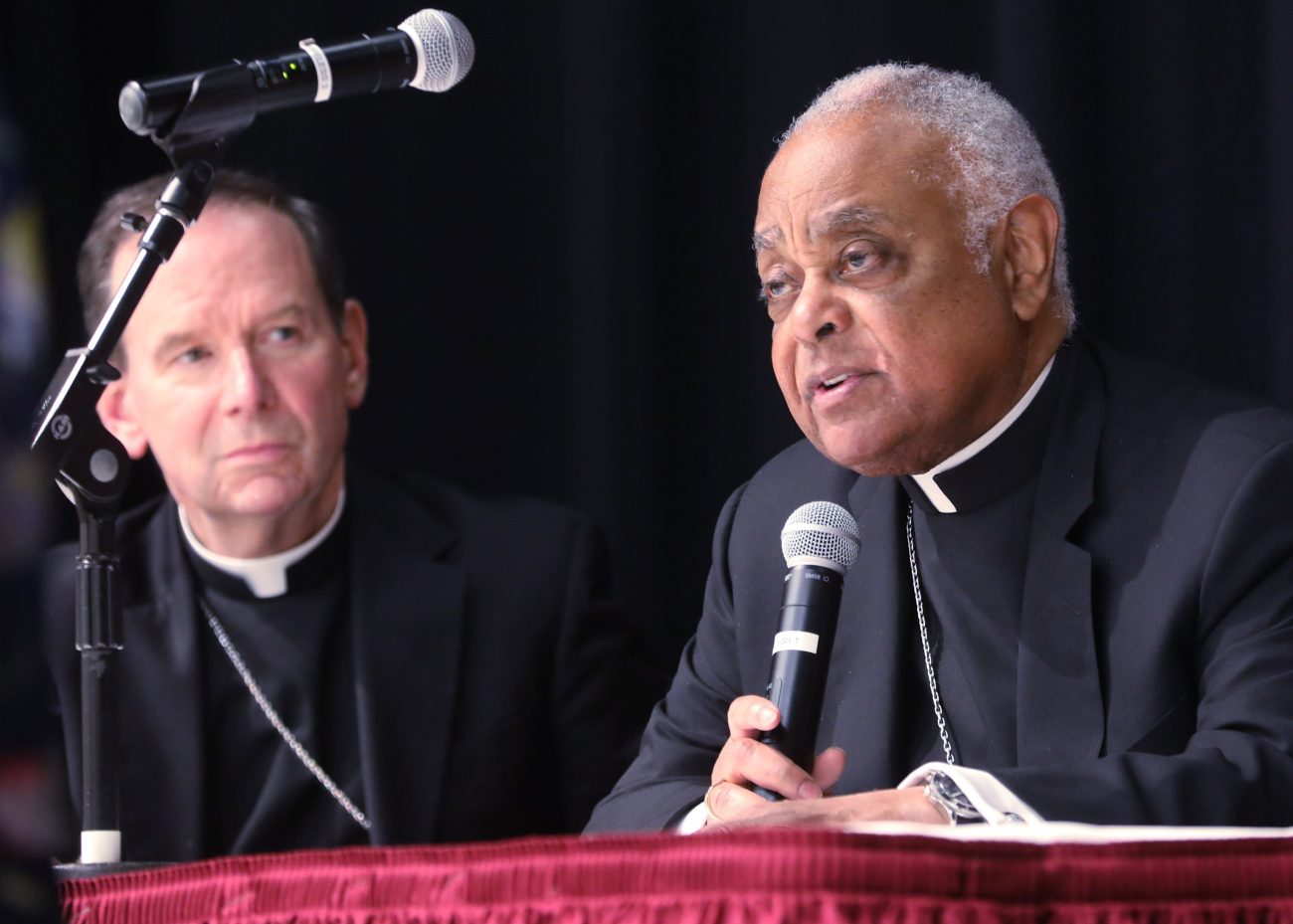 “We need a national reconciliation — a healing of America’s soul from the torment of oppression and hatred. We need to forgive one another for all of those things that belong to the past so that we can move into a better more hopeful tomorrow,” Cardinal Gregory said March 20. (See the full address here.)

He spoke at a conference at Nativity Church in Burke, sponsored by the Peace & Justice Commission of the Diocese of Arlington, Virginia.

Washington’s cardinal archbishop underscored the need for racial and multicultural understanding, saying: “When we approach one another’s history, we stand on holy ground.”

The first step of valuing cultural diversity, he said, begins “with the reverence that is due to the history of a people,” and he said that history must be explored with an open mind, adding that he strongly endorses cross-cultural educational opportunities.

He noted that the United States is a nation of immigrants, including some who were brought to these shores in chains.

“Racism is only able to survive as long as there is ignorance. Racism grows only in the soil of ignorance and unfamiliarity. We must be brave enough to acknowledge the savage realities that history may hold. That is why cross-cultural opportunities for all people are an herbicide for the unchecked growth of racism,” Cardinal Gregory said.

“The more that we know about history the less likely we may be to repeat its failures,” he added. “The appreciation of a culture’s history is a primary step in the eradication of racism.”

The cardinal said it remains difficult for people to discuss racism.

“It is still one of the most awkward issues about which one can ever speak! You know the ‘R’ word! We still stumble about trying to find expressions to admit that we are not completely healed of racism as a nation,” he said.

But racism is real and sometimes deadly, and Cardinal Gregory noted the March 16 murders of six Asian American women working in spas in the Atlanta area.

“Within the past few days, we have been faced with the hatred and violence that Asian-Americans have endured with increased intensity since the beginning of the global pandemic, and now the horrific killing of Asian women in the Atlanta community reminds us that we still have serious racial problems that continue to plague our national harmony and unity,” he said.

Two other also were fatally shot in the attacks on the spas. The shooter, who claims he was not motivated by racial bias, has been charged with eight counts of murder.

The United States was founded on noble ideals of human equality, principles that through its history and today have not been translated into the everyday lives of all of its diverse people, the cardinal said.

“Let’s face it, we have a long way to go before we truly reflect the ‘E pluribus unum’ that our currency so proudly proclaims,” the cardinal said, later adding: “In attempting to bring to reality the words of the great seal of the United States: E pluribus unum, the unum (one) does not supplant or deny the pluribus (many), it becomes a new reality of oneness and strength because of the many who enhance it by their diversity.”

The conference’s title, “Open Wide Our Hearts: The Enduring Call to Love” was drawn from the U.S. bishops’ 2018 pastoral letter against racism, and then-Archbishop Gregory was scheduled to speak to the gathering one year ago, before the pandemic caused its postponement.

Conference-goers gathered in Nativity’s school gymnasium. They wore face masks and sat socially distanced from one another in accord with safety guidelines to prevent the spread of the coronavirus.

Noting that he was delighted to speak at the conference during his first official visit to the Diocese of Arlington, which he said has a “proud heritage and faithful commitment to racial justice and diversity,” Cardinal Gregory opened his remarks by joking that “I feel like I’m preaching to the choir on occasions like this,” since it was doubtful there were any racists in the audience.

But he said it is important to talk about racial healing, even when it means “preaching to the choir quite simply because the task of peacebuilding here and in too many other communities is yet to be achieved and even the choir needs a good rehearsal or a practice now and then.”

The cardinal added, “Racial healing is an aspiration that will only be possible because of the ceaseless attention of all people of goodwill who believe in the value and significance of living harmoniously in a multiracial, multicultural society.”

He said that “the issue of race is never very far from the dimension of any of our lives in America,” and he noted, “part of our healing will depend upon our ability to recognize diversity as a positive reality.”

Cardinal Gregory, who titled his talk “Seeing With the Eyes of Christ,” emphasized how confronting racism and promoting racial harmony is a work of faith.

“The Catholic Church, because we are Catholic, has the responsibility to call all of our people to see with the eyes of Christ,” he said. “We are obliged to challenge our society and any institution within society that supports, defends, or promotes racism or inter-cultural hostility. An important component of our Christian identity is our ability to be peacemakers.”

Cardinal Gregory pointed out how the Book of Genesis in the Bible tells the story of how “God fashions a whole universe with splendid variety and repeatedly pauses in the midst of his creative accomplishments to make an obviously self-satisfied reflection that ‘it was very good.’ … Part of the message of our Judeo-Christian religious heritage is that God’s elegant wonder is best experienced in the diversity of his creation.”

That diversity should be recognized as an important component and a strength of our nation, the cardinal said, adding, “Our national unity is not predicated on all of us being exactly alike so much as it is on sharing common goals, a national purpose, and an acceptance of our differences as an advantage rather than a liability.”

Cardinal Gregory called on Catholics and people of all faiths to confront racism.

“The ecumenical and interfaith community in our region needs to continue to reassert its pastoral responsibility in challenging its faithful to accept the dictates of the Gospel and the tenets of our various religious principles and moral teaching in rejecting all forms of racism, bigotry and injustice,” he said.

“Above all, those in pastoral leadership ought to encourage the fainthearted, the timid, and the hesitant souls to be brave in standing up to counter the subtle and occasionally not so subtle forms of intolerance.” 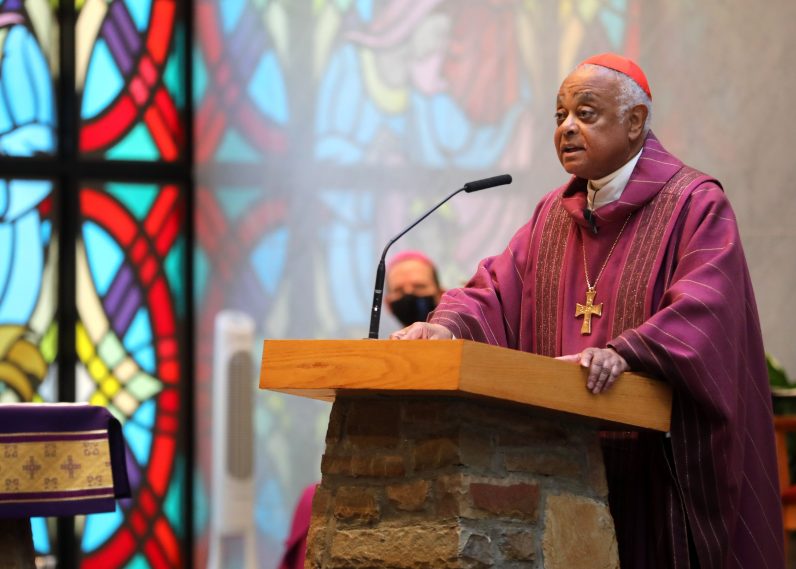 NEXT: Religious, labor leaders upbeat after talk with treasury secretary