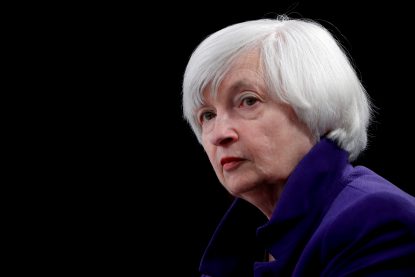 (CNS) — A meeting with U.S. Treasury Secretary Janet Yellen is buoying the outlook of religious leaders that a balanced global economic response to the coronavirus pandemic will ease the challenges facing developing countries struggling through a deep recession.

The March 16 meeting in Washington aired concerns held by Jewish and Christian leaders, including two U.S. Catholic bishops, as well as organized labor.

It is the first such meeting involving a Treasury Department secretary and faith leaders in at least three decades, said Eric LeCompte, executive director of Jubilee USA, an alliance of faith-based development and debt relief advocacy organizations, who organized the meeting.

In addition to Catholic representatives, also attending were leaders of the Lutheran, United Methodist, Presbyterian and United Church of Christ churches, the Union for Reform Judaism and the Puerto Rico Evangelical General Bible Society. They were joined by the AFL-CIO and the International Trade Union Confederation.

LeCompte told Catholic News Service March 22 the session was particularly important given that in April the Group of 20 nations, or G-20, is expected to decide on several policies related to the global financial crisis. 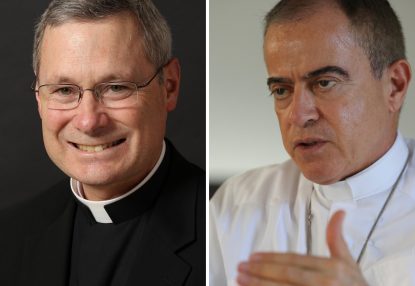 Bishop David J. Malloy of Rockford, Ill., who is chairman of the U.S. Conference of Catholic Bishops’ Committee on International Justice and Peace, and Archbishop Roberto O. Gonzalez Nieves of San Juan, Puerto Rico, are seen in this composite photo. (CNS composite; photos by Nancy Wiechec and Bob Roller)

U.S. input heavily influences IMF policymaking and LeCompte expressed optimism that Yellen’s correspondence to the fund detailing the American stance will include the policy recommendations reiterated during the meeting.

LeCompte also said the themes of the meeting echoed calls by Pope Francis for the world’s financial institutions and most advanced countries to address financial challenges and the strangling debt poor nations face.

Among those speaking during the roundtable discussion was Bishop David J. Malloy of Rockford, Illinois, chairman of the U.S. bishops’ Committee on International Justice and Peace. He examined the important need for SDRs to benefit people living in dire poverty in many developing countries.

The faith leaders also urged Yellen to seek the suspension of debt payments for the poorest countries of the world. The G-20 nations agreed at the start of the pandemic to suspend debt payments owed to them by the 77 poorest countries that qualify under the Debt Service Suspension Initiative. Some 40 countries holding about $12 billion in debt have taken advantage of the plan.

LeCompte recalled that Yellen explained during the meeting that she intended “to use the full power of the Treasury” to help lift people out of poverty and to address climate change. “That was incredibly important,” he said.

Including climate change in federal policy making and the drafting of rules and regulations was the subject of an executive order President Joe Biden signed in the early days of his presidency.

A readout of the meeting from the Treasury Department acknowledged Yellen “made clear” to attendees “the Biden administration’s commitment to reducing global poverty.”

“The secretary noted the Treasury Department’s commitment to address global inequality and efforts with international partners to tackle the crisis, including support for the implementation of the Debt Service Suspension Initiative,” the readout said.

By not having to service debt payments, countries can use their limited financial resources to address the pandemic’s damaging effects.

In his presentation, Archbishop Gomez urged Yellen to ensure that $4 billion in aid allocated by the U.S. to the territory directly benefits people in need and would not be claimed by financial institutions holding Puerto Rico’s multibillion-dollar debt.

The funds have been provided largely to combat the high rate of child poverty in Puerto Rico and to help island residents in their recovery from two devastating hurricanes in 2017.

LeCompte explained that such assurance will require Yellen to establish rules on how the funds can be used. “If the rules are not done correctly, unfortunately unscrupulous creditors can swoop in and take that money,” he said.

Archbishop Gonzalez also asked Yellen to monitor an estimated 1 million anticipated income tax filings with the Internal Revenue Service so that families can benefit from the expansion of two longtime federal programs included in the recently passed American Rescue Plan: the earned income tax credit and the child tax credit.

The March 16 meeting was the most recent in a series of steps coordinated by Jubilee USA and involving faith leaders, including the U.S. Conference of Catholic Bishops.

In a Feb. 23 letter to Biden, Bishop Malloy and LeCompte stressed the importance of including the voices of developing countries in planning on how to deal with the economic structures that cause poverty, inequality and other challenges that became widely exposed by the pandemic.

Over 200 religious, labor and human rights groups signed a March 15 letter to Biden urging aid, debt relief and new development practices in response to the pandemic.