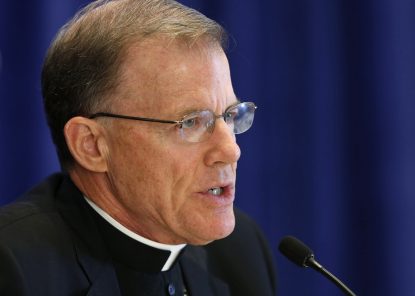 Archbishop John C. Wester of Santa Fe, N.M., speaks during a news conference during the 2015 fall general assembly of the U.S. Conference of Catholic Bishops in Baltimore. (CNS photo/Bob Roller)

ALBUQUERQUE, N.M. (CNS) — With abortion and assisted suicide front and center in the New Mexico Legislature, “I wonder, what have we become?” Santa Fe Archbishop John C. Wester said in a March 3 statement.

“The repeal of abortion restrictions and the potential legalization of assisted suicide are gravely disappointing but not defeating,” he said. “Just as the disciples witnessed Jesus’ death and resurrection, we understand disappointment. And we know that love wins.”

On Feb. 26, Democratic Gov. Michelle Lujan Grisham signed a bill into law overturning a dormant 1969 ban on most abortion procedures.

If the law had remained on the books, it would go into effect if the U.S. Supreme Court eventually overturns the landmark Roe v. Wade ruling legalizing abortion nationwide in 1973. Because of the court’s ruling, New Mexico’s law never took effect.

If Roe is overturned, “the legalization and regulation of abortion falls to each state,” Archbishop Wester said. “New Mexico is set to legalize abortions with very few restrictions. Particularly concerning is that this law also removes all conscience protections for medical providers and requirements that abortion be performed only by a doctor, both of which had been enforceable, even under Roe v. Wade.”

Republican state Sen. Gregg Schmedes, a physician, voted against the repeal and has promised to introduce an amendment later that would provide a “conscience protection clause” so health professionals who oppose abortion on religious or moral grounds would not be forced to perform them.

Archbishop Wester said a bill to legalize assisted suicide is quickly making its way through the Legislature, and it is “set to be the worst in the nation, making it a requirement that all patients in hospice care be offered assisted suicide as an option.”

“This as we struggle to dissuade our young people from taking their lives when they are struggling with depression and despondency. With these bills, I wonder, what have we become?” he said.

But in the face of these anti-life measures, as Catholics, “we work to protect vulnerable life, especially the unborn and those at the end of life, with the hope of changing hearts with love,” Archbishop Wester said.

“Protecting the unborn, providing alternatives to abortion and walking with those at the end of life require systemic changes that transcend political parties,” he said. “We journey with women facing the wrenching decision of whether to have an abortion and with women who have had an abortion, making God’s mercy known to them.”

“We walk with families and individuals who are facing the end of life,” the archbishop added, “providing them with hope and mercy, trusting that love wins.”

NEXT: Doctors seek permanent relief from mandate to do transgender surgeries