Doctors seek permanent relief from mandate to do transgender surgeries 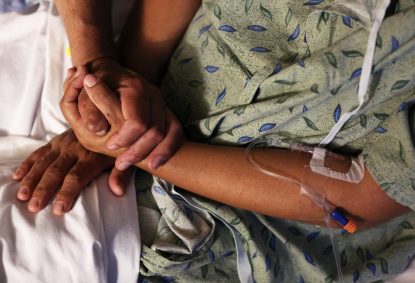 A hospital patient is comforted by a family member in this illustration photo. Attorneys for a Catholic health care system and an association of other Christian health care workers argued before the U.S. Court of Appeals for the Fifth Circuit March 3, 2021, for protecting doctors from being forced to perform gender-transition procedures against their moral or religious beliefs. (CNS photo/Caitlin O’Hara, Reuters)

NEW ORLEANS (CNS) — Attorneys for doctors and hospitals argued in the U.S. Court of Appeals for the 5th Circuit March 3 that they shouldn’t be forced to perform gender-transition surgeries required under the Affordable Care Act, stressing this is an issue of conscience.

The case focuses on a 2016 regulation issued by the Department of Health and Human Services requiring doctors to perform these procedures on children and adults or be held liable for discrimination.

After the rule was first issued, Becket, a religious liberty law firm, filed a lawsuit in the U.S. District Court in Texas, saying the rule violated the Religious Freedom Restoration Act.

The lawsuit was filed on behalf of Franciscan Alliance, a religious hospital network serving Indiana and Illinois that now goes by the name Franciscan Health, and the Christian Medical and Dental Associations. The states of Texas, Kansas, Kentucky, Nebraska and Wisconsin also joined in the suit.

Two federal courts in 2016 placed an injunction on the mandate. Two other federal district court judges also ruled against the mandate in 2019 and 2020. However, the courts didn’t issue a permanent injunction against HHS to prevent it from enforcing this rule in the future, which the group of doctors and hospitals were seeking March 3 before the 5th Circuit, which is based in New Orleans.

“Medical decisions related to gender transition have serious implications, and it is clearly in patients’ best interests to ensure that doctors are able to serve in keeping with their consciences and their medical judgment,” said Luke Goodrich, a senior counsel at Becket.

“Government bureaucrats in Washington who want to force doctors to perform controversial, experimental procedures are putting children in harm’s way,” he said in a statement.

He also said the rule “undermines the federal government’s own medical experts’ advice” and that “politicians and activists are trying to force private doctors, on pain of severe punishment, to perform controversial procedures that can be deeply harmful to patients.”

In a tweet March 3, Goodrich said the court “asked the government’s attorney point blank: Does the new administration have plans to go after these religious doctors and hospitals? And the government wouldn’t answer,” which he said, “underscores why plaintiffs need full protection.”

He also tweeted he expects the court “to protect doctors’ consciences and respect their medical expertise. Doing so not only aligns with the law and medical research, but also ensures the best care for patients.”