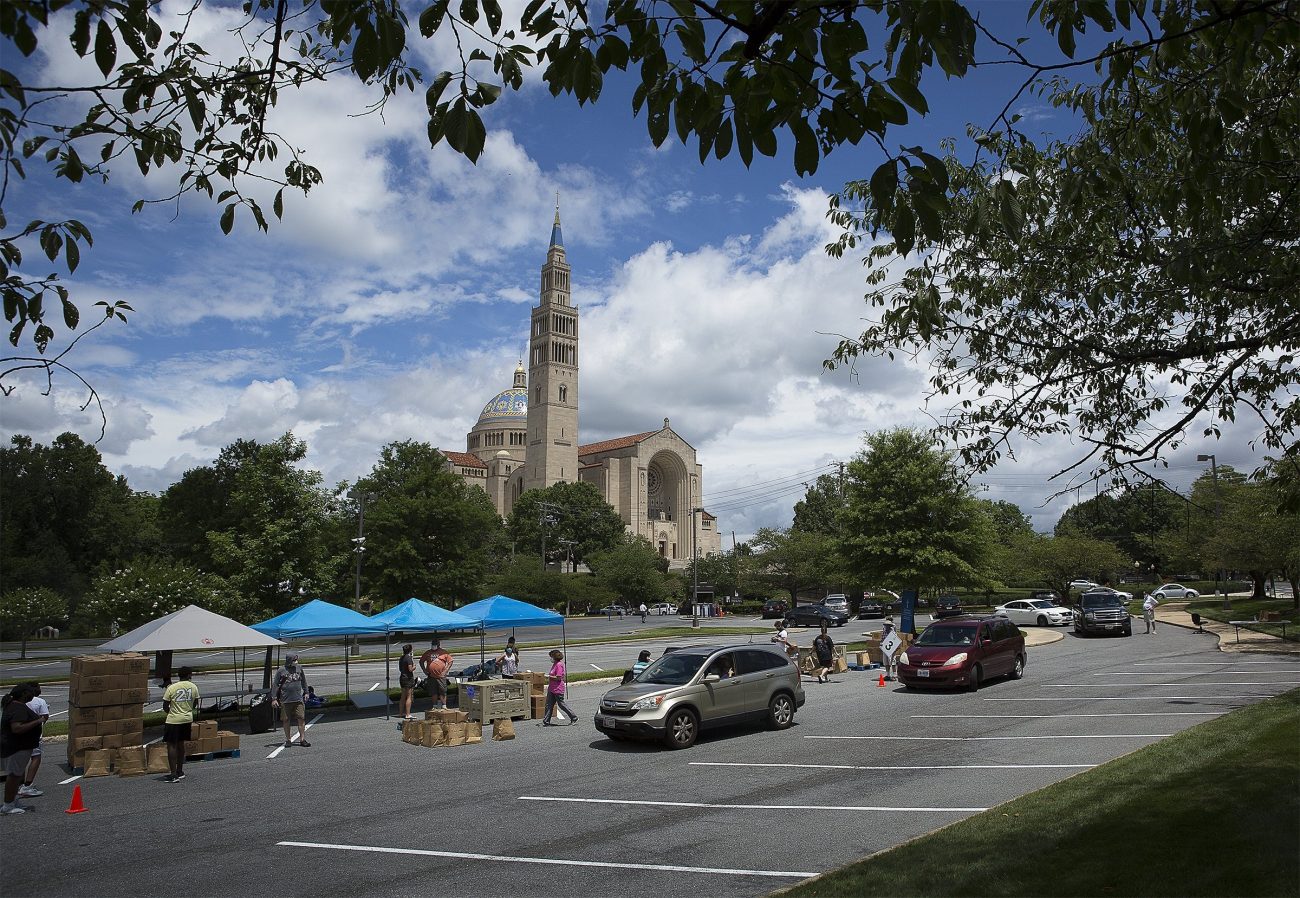 Catholic Charities staff and volunteers in the Archdiocese of Washington distribute 500 grocery boxes and 500 family meals in the parking lot of the Basilica of the National Shrine of the Immaculate Conception July 10, 2020, during the coronavirus pandemic. (CNS photo/Tyler Orsburn)

UPDATED — WASHINGTON (CNS) — If it becomes law, the American Rescue Plan Act would pit the great need Americans have for economic relief in this pandemic against those who insist the bill must include abortion funding, said the president of the U.S. Conference of Catholic Bishops and the chairmen of seven USCCB committees.

“Our nation needs to heal, come together and help one another. The is an important step in the right direction,” the prelates said March 5 in a joint statement. “It should provide much needed assistance for American families and businesses hard hit by the coronavirus pandemic.”

“However, we are deeply concerned that this important legislation, as written, risks creating new divisions by abandoning a long-standing bipartisan compromise that respects the consciences of millions of Americans,” they added.

The bishops were referring to Hyde Amendment language, which was not included in the House version of the American Rescue Plan, H.R. 1319, a $1.9 trillion COVID-19 relief package approved early Feb. 27 in a 219 to 212 vote.

The amendment outlaws federal tax dollars from directly funding abortion except in cases of rape, incest or when the life of the woman would be endangered.

“For 45 years, the U.S. Congress — whether controlled by Democrats or Republicans — has maintained that taxpayers should not be forced against their conscience to pay for abortions,” the bishops said. “Abandoning this compromise in a time of national emergency only serves to divide people in the very moment we should be united. Please, let us instead focus on delivering the COVID relief so desperately needed.”

The U.S. Senate voted on its version following a marathon session that included a 10- to 12-hour reading of the entire bill, as well as consideration — and eventual defeat — of a number of amendments.

Not a single Senate Republican backed the bill; most were concerned about its size and scope. Sen. Dan Sullivan, R-Alaska, missed the vote to attend his father-in-law’s funeral.

The measure now returns to the House for lawmakers in that chamber to reconcile its bill with the Senate version. One main difference is the Senate did not include a mandate for a $15 minimum wage by 2025. The Senate parliamentarian said under budget rules, it could not be included.

“We urge President (Joe) Biden and the leadership on Capitol Hill not to force upon Americans the wrenching moral decision whether to preserve the lives and health of the born or unborn, all of whom are our vulnerable neighbors in need,” the U.S. bishops said March 5. “We ask that our leaders please not pit people against one another in such a way.

“We ask all members of Congress to include the same protections against abortion funding that have been present in every COVID relief bill to date, and every annual spending bill for almost half a century.”

On March 4, Sen. Kevin Cramer, R-N.D., said the ban on taxpayer-funded abortion was being “stripped away.” He made the comment on “Washington Watch,” a daily radio program hosted by Family Research Council president Tony Perkins. He estimated “$414 billion in their (Senate) spending is not Hyde-protected.”

“If they (put) a bill in front of us that provided more money for getting the vaccines distributed more widely and faster, and some other assistance for direct COVID relief,” Cramer added, “they’d get 100 votes in the Senate.”

From the House floor ahead of the Feb. 27 vote, Rep. Chris Smith, R-N.J., criticized House Speaker Nancy Pelosi, D-Calif., and the House Rules Committee for refusing to allow a vote on adding language to the House bill “to ensure that taxpayers aren’t forced to subsidize abortion,” as provided by the Hyde Amendment.

Leaving out the language is “a radical departure from all previous COVID-19 relief laws,” Smith said.

The McMorris Rodgers-Foxx-Walorski Amendment — co-sponsored by 206 House members — would have added the Hyde language, but it was rejected on the floor and as what became the final bill worked its way through to the House floor.

Besides the Catholic bishops, a number of national pro-life leaders also have decried the absence of Hyde language in the American Rescue Plan.

March for Life’s president, Jeanne Mancini, said that “pro-abortion Democrats are using this bill to push through billions of dollars in subsidies for abortions, not only here in the U.S. but also abroad.”

Only 9% of the $1.9 billion proposed by the House and Senate in their respective bills is earmarked for pandemic relief.

Both the House and Senate versions include $246 billion for extending unemployment benefits through August and increasing the federal supplemental payment from $300 per week to $400. Lawmakers hope a final bill can be sent to Biden for his signature before unemployment assistance expires March 14.

The American Rescue Plan bill includes $17 billion for vaccine-related activities and programs and $110 billion for other efforts to contain the pandemic; $130 billion for public schools; and $143 billion to expand child tax credit, child care tax credit and earned income tax credit mostly for one year.

Other provisions include $45 billion to temporarily expand Affordable Care Act subsidies for two years and subsidize 2020 and 2021 coverage; $50 million for family planning; $25 billion for grants to restaurants and bars; $7 billion to allow more loans under the Paycheck Protection Program; and $6 billion to increase nutrition assistance. It also includes $350 billion to help state and local governments bridge budget shortfalls.