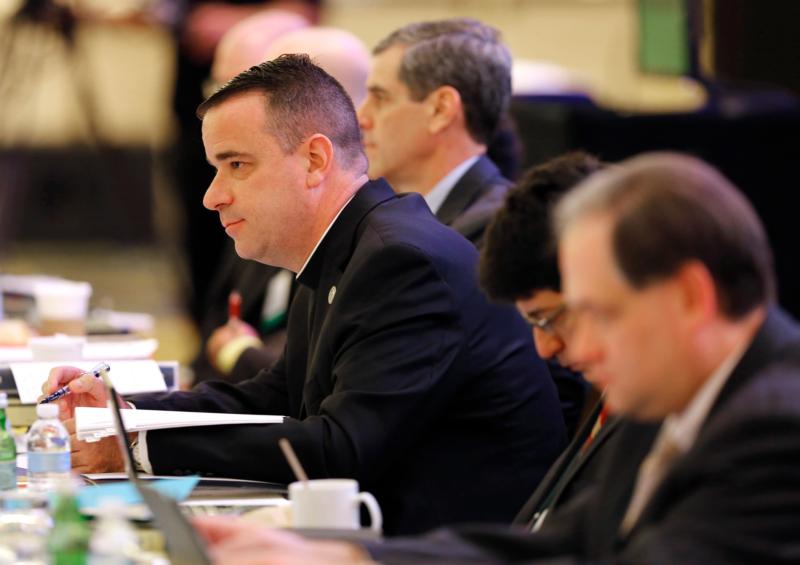 (CNS) — It was during the first days of March 2020 that the novel coronavirus that causes COVID-19 turned up in discussions of the executive team at the U.S. Conference of Catholic Bishops in Washington.

James Rogers, USCCB’s chief communications officer, had broached the subject of the global spread of the virus during the daily executive staff meeting led by Msgr. J. Brian Bransfield, general secretary. The World Health Organization’s declaration of a pandemic was still days away.

“James brought it up and said this is gathering steam in the news,” Msgr. Bransfield recalled. “And he said Catholic News Service wanted to see if they can test their system to work remotely. And I said, ‘Yes.’ I said, ‘I don’t know if we’ll need it, but yes, test the system.'”

The test occurred March 11 and went smoothly. The staff in the news service’s Rome bureau already had been working remotely because Italy had been shut down for weeks by the virus. Greg Erlandson, CNS director and editor-in-chief, thought it prudent to be prepared should the coronavirus’ reach suddenly widen exponentially.

Four days later, not only were CNS staffers working remotely but so was every other USCCB employee.

Msgr. Bransfield said he decided to close the USCCB headquarters the evening of March 12, a Thursday. The building would shutter indefinitely at the close of business the next day.

“That Thursday night, as of then, no one had tested positive, and I was going to keep it that way,” he said.

“Friday morning I texted the executive team to meet in my office,” Msgr. Bransfield continued. “They all came in and I said, ‘Here’s what I decided. We have to put the safety and health and well-being first.'”

He thought it would be a couple of months at most before all 300 employees would return to work together. The building remains closed more than a year later, however, although a handful of people make their way to the office throughout the workweek. 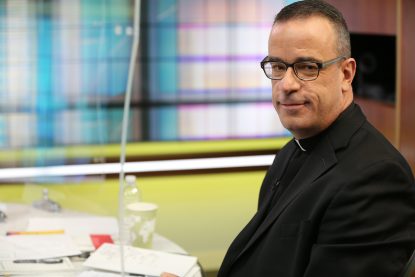 Looking back, Msgr. Bransfield told CNS March 18 that the priorities of safety, health and personal well-being were foremost in his mind as he guided the conference throughout the remaining eight months of his term as general secretary.

“I thought people could get sick and worse,” he said. “That weighs on me unlike it weighs on anyone else because I was the general secretary.”

Msgr. Bransfield handed off his responsibilities after five years, the general secretary’s normal term, to Msgr. Jeffrey Burrill, at the conclusion of the bishops’ fall general assembly Nov. 18.

Msgr. Burrill was unavailable to discuss his role.

Through a series of town hall meetings conducted via Zoom, emails that offered practical advice, words of inspiration and suggestions for prayer, individual conversations with staff members, and phone calls to CNS journalists in Rome, Msgr. Bransfield worked to keep employees informed of his thinking as the pandemic caused lockdowns and restricted people’s movements.

“You have to connect with people,” he said. “Connection is the key in crisis. No one says after a crisis, ‘You know you just over-communicated.’ Connection will help people feel heard, connected and safe.”

Throughout those months, he also reiterated in various communications that any decision to reopen USCCB headquarters, located on the edge of Washington’s Brookland neighborhood, would not be undertaken until it was safe to do so. He reassured that if the building was to reopen, “if someone has anxiety about coming back, then they don’t have to come back.”

“Morale for me equated to safety. I wanted people to feel safe physically but also emotionally. You can do everything you want for morale, but if people don’t feel safe, it’s not going to help morale,” he added.

It was the faith and example of his parents that helped Msgr. Bransfield chart a path through an episode the world had not experienced in more than a century. He said it was their “endurance” to do their best to provide for their family as he was growing up in the 1970s.

His father took two buses to and from work to support the family. His mother “would do anything for her children.”

“It was a spirituality that is determined through determination to do the right thing,” Msgr. Bransfield said. “Endurance as a good way of life, not as a passive putting up with. Endurance is a momentum that says we put our shoulders to the burden together and we’re going to get there.”

That didn’t make the trek easy, he realized, but endurance rooted in faith made it possible.

As he managed the response to the pandemic, Msgr. Bransfield also drew inspiration from the psalmist who especially wrote in Psalm 31: “In you, God, I take refuge.”

“The psalmist is always talking about safety,” he said. “Safety is not just precaution, but it is a spiritual reality.”

Msgr. Bransfield and the executive team also wanted to avoid staff layoffs. Discretionary expenditures in each department were cut. Travel was eliminated.

“To me, it’s a moral issue to tell someone that they’re getting their last paycheck,” he said. “The team did well to find all the other expenses we could cut. It was very strong and very good that we didn’t have to go to layoffs.”

During the online town hall meetings, Msgr. Bransfield regularly commended staff for continuing to complete tasks and achieve the goals established under the bishops’ strategic plan despite being physically separated.

And he continued to stress that safety was his underlying concern.

“Our work is important, but the people are more important,” became his mantra during those gatherings.

Following his departure from the USCCB, Msgr. Bransfield was on sabbatical and now assists full time in a parish in his home Archdiocese of Philadelphia. He finished writing a book about angels and has written articles for publication. He’s awaiting his new assignment from Archbishop Nelson J. Pérez in June.

NEXT: Dallas Catholics pitch in to help migrant teens