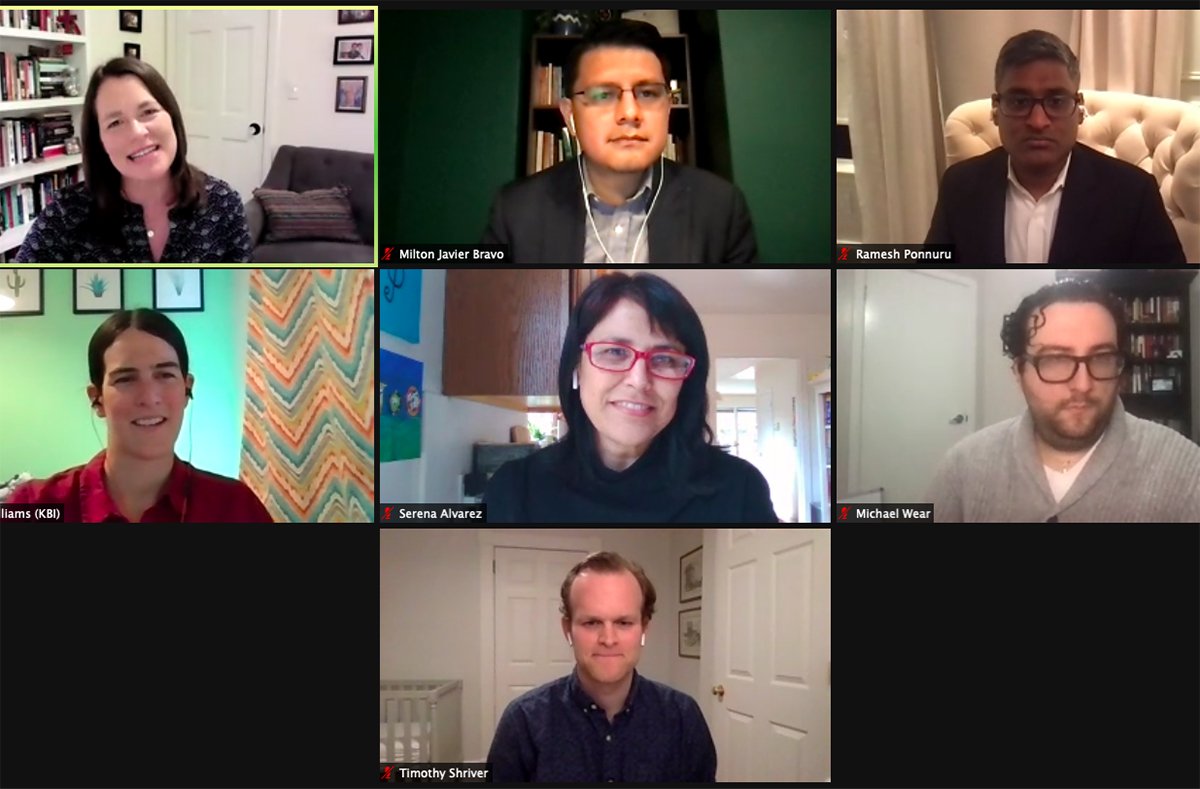 WASHINGTON (CNS) — On the anniversary of the COVID-19 pandemic shutdown and the day President Joe Biden signed the $1.9 trillion American Rescue Plan act, a panel of Catholic opinion-makers had suggestions for what’s ahead for Catholic moral principles and public policy.

“I think there is a real opportunity here to center (on) the most vulnerable in our communities,” said Milton Javier Bravo, director of audience development for Commonweal magazine.

“Not only at the border, which is really essential, but also in the midst of our New York/New Jersey metropolitan area, in California, in Chicago, in D.C.,” he said. “I think that’s a great opportunity to think through the preferential option for the poor and the most vulnerable in our communities.”

Bravo, who also is an adjunct professor of theology at St. John’s University in Jamaica, New York, was part of a March 11 online panel, “Young Catholics and the Biden Administration: Moral Principles and Policy Priorities.”

It was sponsored by Georgetown University’s Initiative on Catholic Social Thought and Public Life as part of its Salt and Light gatherings for Latino leaders.

“And I think that an expansion of child credit or various other kinds of support for families would be helpful in combating child poverty,” he said. “And in also sort of addressing the economic dimension of family life which is something that in various ways I think both parties have neglected to do.”

But Ponnoru found it “disappointing and dismaying” that the new administration favors taxpayer financing of abortions through government support for Planned Parenthood.

“That is the direction that the Democratic Party has been going for quite a long time,” he said. “But I do hope that those of us who are pro-life, whether we are allies or opponents of the Biden administration on other issues, can come together and try to persuade Congress and the administration to at least put this issue of taxpayer funding on the back burner if not to abandon it altogether.”

Michael Wear, the founder of Public Square Strategies, agreed with that assessment.

“I actually share the disappointment and disagreement with the way that funding for abortion is handled in the American Rescue Plan,” he said. “It’s important for me to say that as someone who is a Democrat.”

Unlike all the previous COVID-19 relief bills, the $1.9 trillion plan signed into law by Biden on March 11 is absent any Hyde Amendment language to keep taxpayers’ money form being used to pay for abortions.

“That actually we’re so secure in the Gospel that we’re not going to politics seeking the kinds of emotional fulfillment that it seems like our politics is.”

“It’s important that we don’t consider the (abortion) debate to be over,” he said. “There are going to be key appropriations bills later in the year that are the key pieces. Both substantively and in terms of how we think about Hyde itself.”

He added that he hopes the absence of Hyde language in the American Rescue Plan doesn’t prompt lawmakers to think “now this is the new normal.”

“My view of the Biden administration right now is I really appreciate that the (Cesar Chavez) bust sits in the Oval Office,” said Serena Alvarez, an attorney whose parents were political activists in the farm labor movement.

Her lesson from her father, who also was a deacon, was to show up for God, she said. “When you hear God’s call, show up. Moses didn’t know what he was doing, neither did Jonah. You just have to get there and show up.”

And “when you show up, be a good pest. With a capital ‘P.’ You would be surprised how much people appreciate the persistence of goodness,” she added.

One brutal lesson from the pandemic is “the fact of deep inequality in our society in that any type of challenge or crisis only exacerbates that inequality,” said Joanna Williams, executive director of the Kino Border Initiative.

Williams criticized the trope of thinking that events would get “back to normal” when “what we’ve done instead is, we’ve used the pandemic as a pretext to erode rights in lots of different venues. You know, here at the border the pandemic was used as a pretext to close off access to asylum altogether.”

She recalled a Guatemalan activist who asked her what it would take to get protection in the United States. “And the answer is, there is no access,” Williams said. “And the Biden administration hasn’t made clear what that will look like. We’re still using the pandemic as a pretext to erode rights.”

Taking a decidedly different tack, Tim Shriver Jr., a former president of the Jesuit Volunteer Corps, said his experiences there helped him find a way to disengage with political discussions for the time being.

“My own kind of way of engaging the Biden administration right now has actually been to really take Lent very seriously and the call to prayer and fasting very seriously. I guess in some ways it’s a traditional Catholic answer, to pray and fast. But in the same way, perhaps counterintuitive in a conversation around public policy.

“But I have given up social media and traditional media for the entirety of Lent,” he said. “It’s a privilege of being in school right now. I don’t have jobs like some of the people here who have to know exactly what’s in the Biden bill right now.”

Shriver called all of that “transformative.”

“It’s given me a chance to experience the divine in my son, in my wife, in my loved ones. And really space for prayer, which I think is really hard to come by,” he said.

“And I trust the Biden administration will still be here at Easter, God willing. And there’s obviously vital policy coming through right now,” he added. “But it will still be there, and I hope to return to the conversations with a little more perspective and grounding and understanding of where God is calling me.”

NEXT: American Rescue Plan praised for helping ‘the most vulnerable among us’