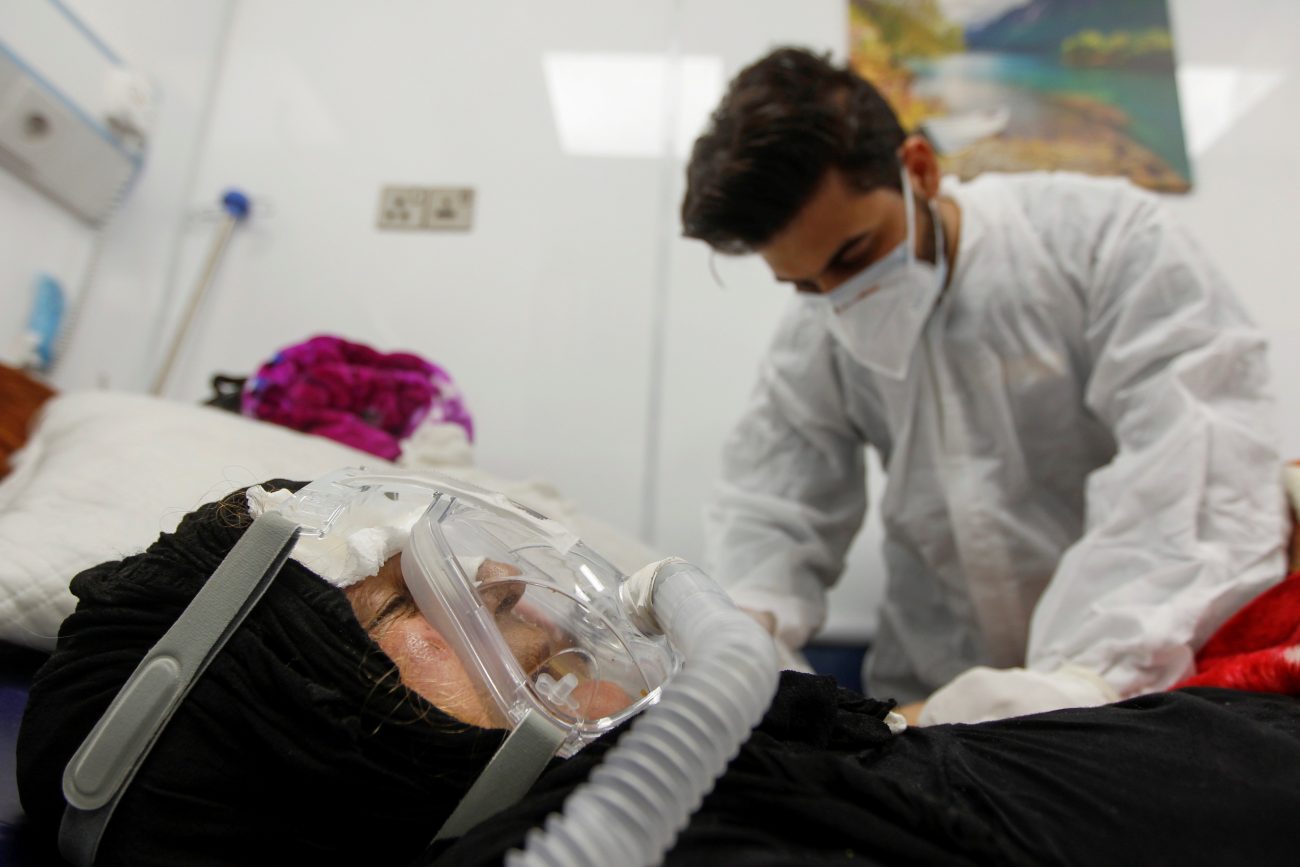 A health care worker checks on a woman infected COVID-19 at the quarantine ward of a hospital in Najaf, Iraq, Feb. 25, 2021. Cardinal Leonardo Sandri, prefect of the Congregation for Eastern Churches, said Christians in the Middle East need the support of Catholics worldwide to overcome difficulties brought on by the COVID-19 pandemic. (CNS photo/Alaa Al-Marjani, Reuters)

VATICAN CITY (CNS) — The support of Catholics worldwide is an invaluable resource for small Christian communities in the Middle East who have been devastated by the COVID-19 pandemic, a Vatican official said.

In a letter sent to bishops around the world and released by the Vatican March 11, Cardinal Leonardo Sandri, prefect of the Congregation for Eastern Churches, asked for continued support for the traditional Good Friday collection for the Holy Land.

“If this small gesture of solidarity and sharing — St. Paul and St. Francis of Assisi would call it ‘restitution’ — fails, it will be even more difficult for many of them to resist the temptation to leave their country, more demanding to support the parishes in their pastoral and educational work and harder to sustain the social commitment to the poor and suffering,” Cardinal Sandri said.

The collection, taken up at the request of the pope, is administered by the Franciscan Custody of the Holy Land and the Congregation for Eastern Churches, which uses it for the formation of candidates for the priesthood, the support of the clergy, educational activities, cultural formation and subsidies.

The Franciscan Custody of the Holy Land, an administratively autonomous province of the Franciscan order, also uses the collection to carry out its mission of preserving most of the shrines connected with the life of Jesus as well as for providing pastoral care to the region’s Catholics, running schools, operating charitable institutions and training future priests and religious.

In his letter, Cardinal Sandri said 2020 was “a year of trials” for the Holy Land’s Christians, who have “suffered an isolation that made them feel even more distant, cut off from vital contact with the brethren from various countries of the world.”

“They suffered the loss of work due to the absence of pilgrims, and the consequent difficulty in living with dignity and providing for their families and children,” he wrote.

Furthermore, Cardinal Sandri said the economic aid from the annual collection fell short since many churches were forced to close their doors during the pandemic.

Nevertheless, he said, “we must not give up on taking care of the holy places that are concrete proof of the mystery of the incarnation of the son of God and the offering of his life for us and for our salvation.”

Along with Cardinal Sandri’s letter, the Vatican press office released some details of how the money was used from the 2020 collection, which totaled more than $7.1 million.

The congregation spent more than $2.3 million on academic, spiritual and human formation of seminarians and priests of churches under their jurisdiction as well as for training men and women religious, it said. More than $2.4 million went for subsidizing schooling and educational activities for young people, including at Bethlehem University; and nearly $2.5 million was used to provide emergency assistance and support to people in 10 countries.

Additionally, the congregation allocated $500,000 from the collection to an emergency fund to assist countries in the Middle East and Africa reeling from the COVID-19 pandemic.

The Vatican also released a list of the projects supported through the funds given to the Franciscan Custody to assist the Christian minority in the region, preserve and provide pilgrim access to the archaeological sites and Christian shrines and support education.

Among the maintenance and restoration work carried out were projects at: the Church of St. John the Baptist; the Sanctuary of the House of Martha, Mary and Lazarus; the Basilica of the Nativity in Bethlehem; and archaeological excavations at the Basilica of Gethsemane.

Funds were also used to build schools, orphanages and homes for the poor. The collection also financed 490 university scholarships and financial aid for local activities.

NEXT: Pope names woman scholar as secretary of biblical commission