Faith amid the ruins: Pope calls Iraqis to affirm kinship under one God 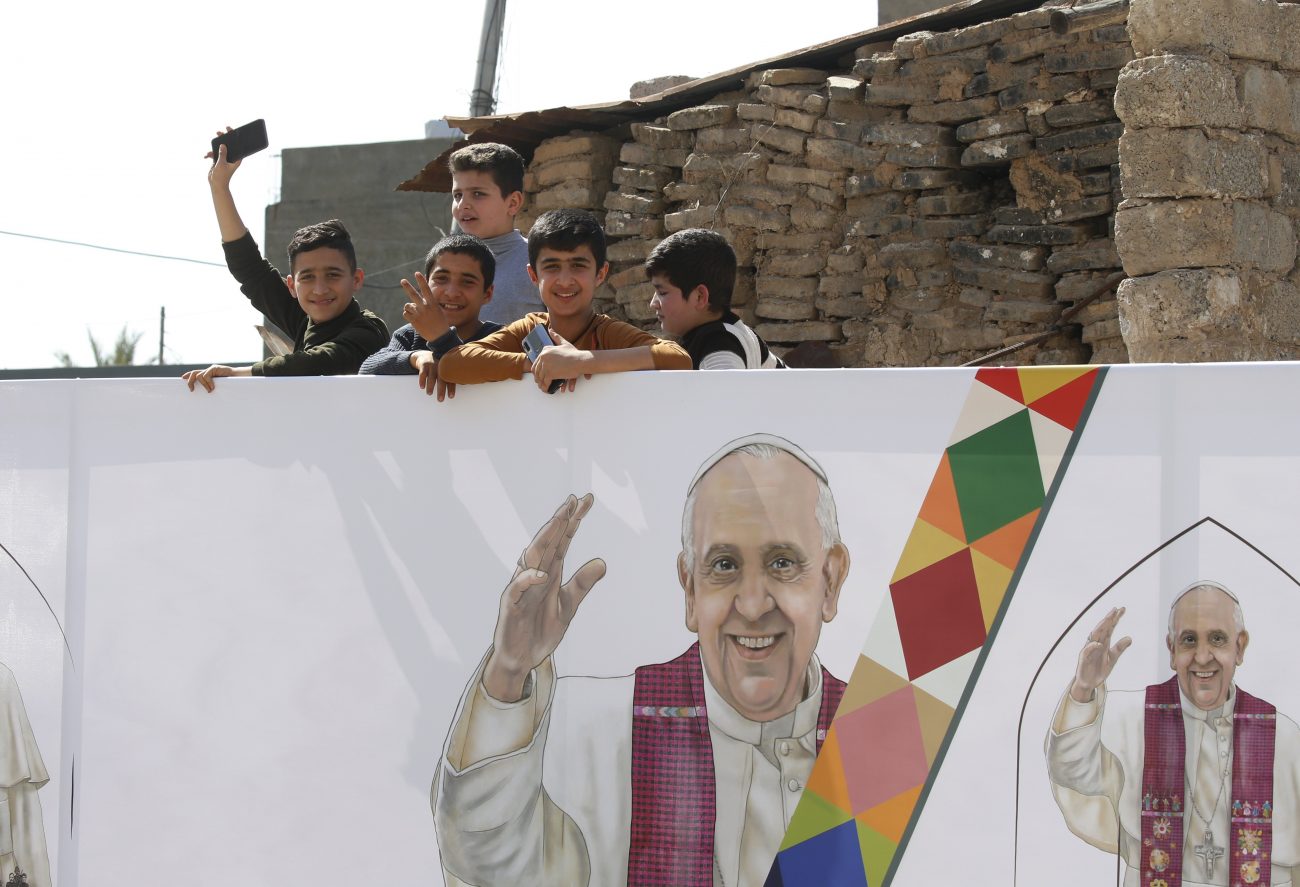 Children are seen near an image of Pope Francis during the pope's visit with the community at the Church of the Immaculate Conception in Qaraqosh, Iraq, March 7, 2021. (CNS photo/Paul Haring)

VATICAN CITY (CNS) — Pope Francis summarized his “pilgrimage of faith and penitence” to Iraq in a prayer:

“If God is the God of life — for so he is — then it is wrong for us to kill our brothers and sisters in his name.

“If God is the God of love — for so he is — then it is wrong for us to hate our brothers and sisters.”

Pope Francis’ visit began March 5 in Baghdad, where he met with government officials in the opulent presidential palace, once home to Saddam Hussein and then the headquarters of the U.S.-led coalition forces that invaded the country in 2003.

With the dictates of protocol handled in less than three hours, the pope moved to the heart of his pilgrimage: visiting places of faith and suffering, bowing in tribute to the innocents who died and embracing survivors.

He put the blame for the death and destruction squarely on the sinful human inclination to define some people as “us” and others as “them.”

That inclination, which all believers must resist, explains why he told government officials and civic leaders March 5, “I come as a penitent, asking forgiveness of heaven and my brothers and sisters for so much destruction and cruelty. I come as a pilgrim of peace in the name of Christ, the prince of peace.” 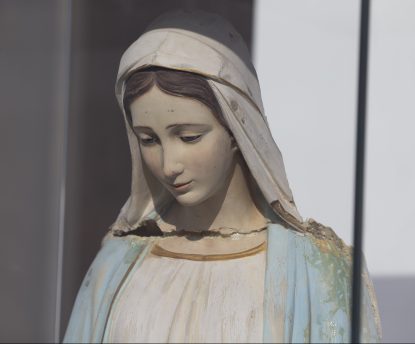 A restored statue of Mary from a parish in Karmless is pictured before Pope Francis’ celebration of Mass at Franso Hariri Stadium in Irbil, Iraq, March 7, 2021. The Islamic State militants decapitated the statue and cut off its hands. The restoration re-attached the head, but left the hands dangling. (CNS photo/Paul Haring)

During the trip, Pope Francis did not mention the U.S.-led invasion of Iraq and the toppling of the government. And, while he spoke of “terrorism” and war in reference to the 2014-2017 destruction wrought by Islamic State militants, he did not name the group until he was on the plane returning to Rome.

Even then, his point was not to condemn IS, but to honor the Christians, Yazidis and Muslims who resisted their efforts to set up a twisted, narrow vision of an Islamic caliphate.

“The life of Christians in Iraq is a difficult life, but not just the life of Christians. I just talked about the Yazidis and other religions that did not submit to the power of Daesh,” he told reporters, using the militants’ Arabic-language acronym.

The resistance, he said, “gave them a very great strength.”

The strength to move forward, to rebuild and to restore relationships of kinship and respect across religious and ethnic boundaries was a constant refrain during Pope Francis’ trip.

The refrain was loudest amid ruins.

With representatives of Muslim, Christian, Yazidi, Mandaean and other religious communities, Pope Francis made a pilgrimage March 6 to Ur, an archaeological dig on a dusty desert plain about 10 miles from modern-day Nasiriyah.

There, at the birthplace of the patriarch Abraham, the first person to believe in the one God and father of all, the pope called all believers to demonstrate their faith by treating one another as the brothers and sisters they are. 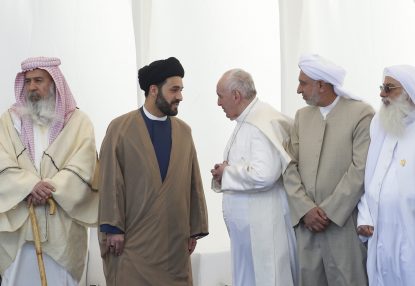 “From this place, where faith was born, from the land of our father Abraham, let us affirm that God is merciful and that the greatest blasphemy is to profane his name by hating our brothers and sisters,” the pope said.

“Hostility, extremism and violence are not born of a religious heart: They are betrayals of religion,” he insisted.

The journey of peace, he said, begins with “the decision not to have enemies.”

Standing in Mosul March 7 amid the ruins of four churches that Islamic State fighters had turned to a massive pile of rubble, Pope Francis did not name an enemy but pointed to the “tragic consequences of war and hostility.”

With Islamic State gone and work underway to restore Mosul’s damaged churches and mosques, Pope Francis proclaimed that today “we reaffirm our conviction that fraternity is more durable than fratricide, that hope is more powerful than hatred, that peace more powerful than war.”

“This conviction speaks with greater eloquence than the passing voices of hatred and violence,” he said, “and it can never be silenced by the blood spilled by those who pervert the name of God to pursue paths of destruction.”

Returning to Rome, he told reporters he had seen photos of the site beforehand but was not prepared for the reality of being there.

“I stopped in front of the destroyed church and I just didn’t have any words. It is something you cannot believe, you can’t believe it,” he said. “It is just unbelievable our human cruelty.”

The first evening of the trip, the pope had met the Iraqi bishops and representatives of the country’s priests and religious in the restored Syriac Catholic Cathedral of Our Lady of Deliverance, sometimes referred to as Our Lady of Salvation.

It is a church, he said, “hallowed by the blood of our brothers and sisters” murdered in a terrorist attack that shook the world. Forty-eight members of the church, including two priests and a 3-year-old child, died Oct. 31, 2010, when militants belonging to a group linked to al-Qaida interrupted a service, detonating explosives and shooting people.

The memory of Iraq’s Christian martyrs, he said, must “inspire us to renew our own trust in the power of the cross and its saving message of forgiveness, reconciliation and rebirth.”

“Christians are called to bear witness to the love of Christ in every time and place,” the pope told the Catholic leaders. “This is the Gospel that must be proclaimed and embodied in this beloved country as well.”

Bells pealed in Qaraqosh March 7 to welcome the pope to another Syriac Catholic parish, the Church of the Immaculate Conception, desecrated during its use as a base by Islamic State fighters, who turned the courtyard into a shooting range.

While much of the town still needs to be rebuilt, Pope Francis said the presence of the jubilant crowds inside and outside the church “shows that terrorism and death never have the last word.”

“The last word belongs to God and to his son, the conqueror of sin and death,” the pope said. “Even amid the ravages of terrorism and war, we can see, with the eyes of faith, the triumph of life over death.”

With Muslim and Yazidi guests joining Catholics in the church, Pope Francis told the people that “this is the time to restore not just buildings but also the bonds of community that unite communities and families, the young and the old together.” 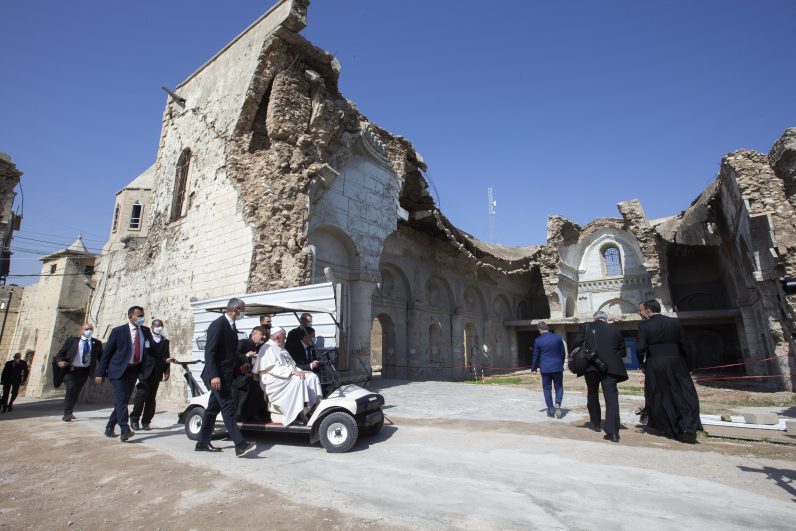