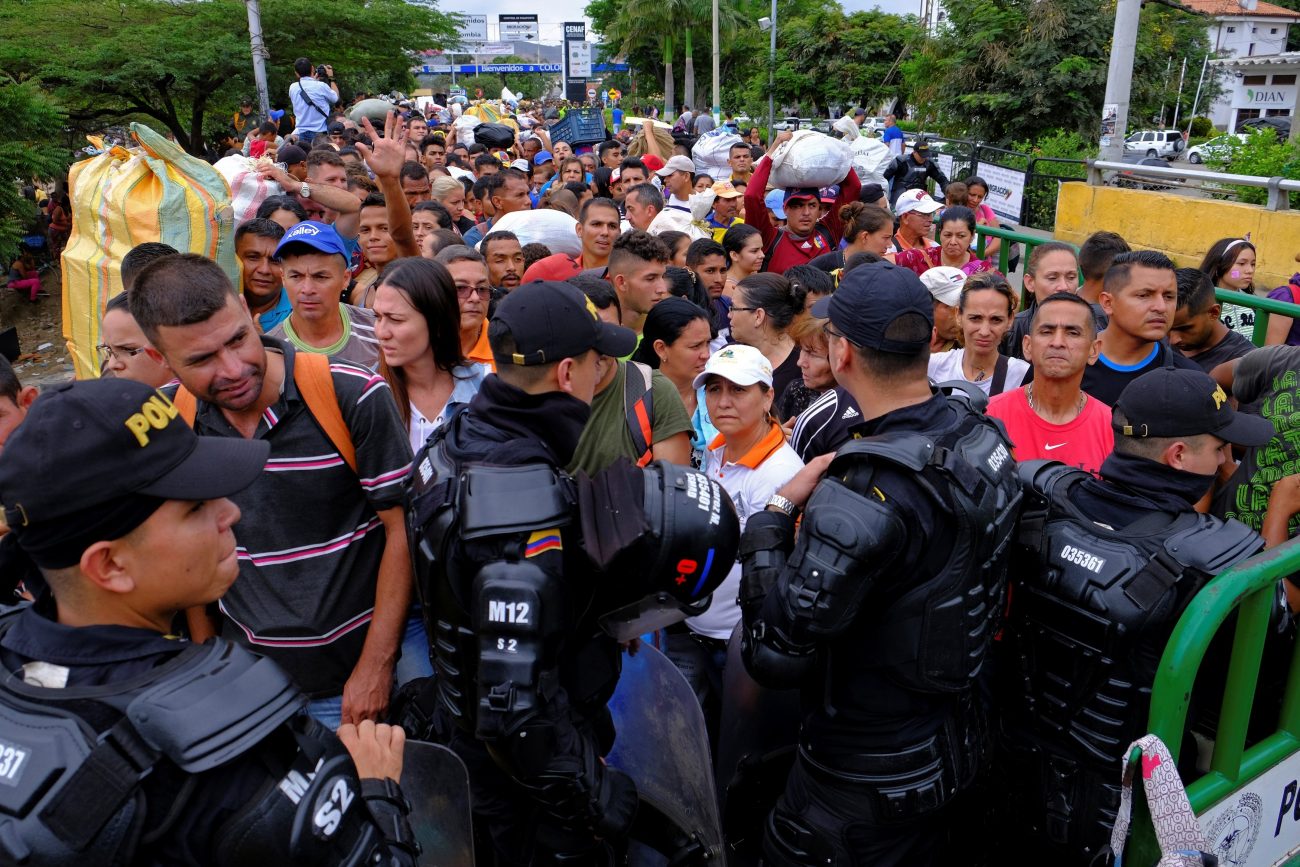 Colombian riot police in Cucuta block the way to the Colombian side in the Colombian-Venezuelan border April 2, 2019. The Biden administration announced March 8, 2021, it is offering 18-months of Temporary Protected Status to about 320,000 Venezuelans in the U.S. who fled their country's economic collapse. (CNS photo/Ferley Ospina, Reuters)

SAN SALVADOR, El Salvador (CNS) — Pro-immigrant groups applauded a March 8 decision by the Biden administration to protect some 320,000 Venezuelans in the United States under a temporary immigration program.

The Temporary Protection Status program, known as TPS, grants a work permit and reprieve from deportation to certain people whose countries have experienced natural disasters, armed conflicts or exceptional situations so they can remain temporarily in the United States.

In the case of Venezuela, political conflict and an economy in a downward spiral has caused some 5 million to flee from the once rich nation.

Administration officials also said they would review sanctions put in place by the Trump administration against the country under the control of Nicolas Maduro, whom the U.S. views as a dictator.

“Venezuela is experiencing one of the largest humanitarian crises in the world, with a collapsed economy and severe shortages of food, medicine, medical supplies and fuel, all compounded by the COVID-19 pandemic,” said Anna Gallagher, executive director of the Catholic Legal Immigration Network Inc., based in Silver Spring, Maryland, in a March 8 news release.

“We are grateful that TPS, a vital humanitarian protection, will be used to safeguard Venezuelans in the United States,” she said.

Faith-based groups such as CLINIC as well as Lutheran Immigration and Refugee Service, or LIRS, had advocated for TPS for Venezuelans during the Trump administration, but it was not granted.

“TPS has been especially critical for Venezuela, given the low asylum grants for the population under the Trump administration,” said the CLINIC news release. “As a blanket protection, TPS fills in the gaps, protecting people who slip through the asylum system and providing much-needed relief.”

“This designation frees hundreds of thousands of Venezuelan families from the fear of detention and deportation,” said Krish O’Mara Vignarajah, president and CEO of LIRS. “This is a commendable move that recognizes the dire conditions on the ground in Venezuela, including an economic and humanitarian crisis that has only been compounded by a global pandemic.”

She added, “The refugee crisis in Venezuela is the largest in the Western Hemisphere and is on pace to surpass Syria as the largest driver of displacement in the world.”

Since 2015, Venezuelans have fled to neighboring countries such as Colombia, Chile and Peru, but some have ended up in the United States, in places such as Florida, prompting Republican lawmakers who have been at odds with immigration reform to also applaud the move by the Biden administration.

“Hundreds of thousands of Venezuelans are fleeing the violence and starvation of Maduro’s socialist regime and the United States must stand with them,” said Sen. Rick Scott, R-Fla., in a statement. “We must continue to do everything in our power to save Venezuela from this tyrannical dictator.”

Venezuelans who apply for and quality for TPS will be able to apply to legally live and work in the U.S. for 18 months.

The U.S. Citizenship and Immigration Services opened up the registration period for those who qualify from March 9 through Sept. 5.

PREVIOUS: Faith amid the ruins: Pope calls Iraqis to affirm kinship under one God

NEXT: Vancouver archbishop works with provincial officials to get churches open