Jesus takes on human suffering to draw close to us, pope says 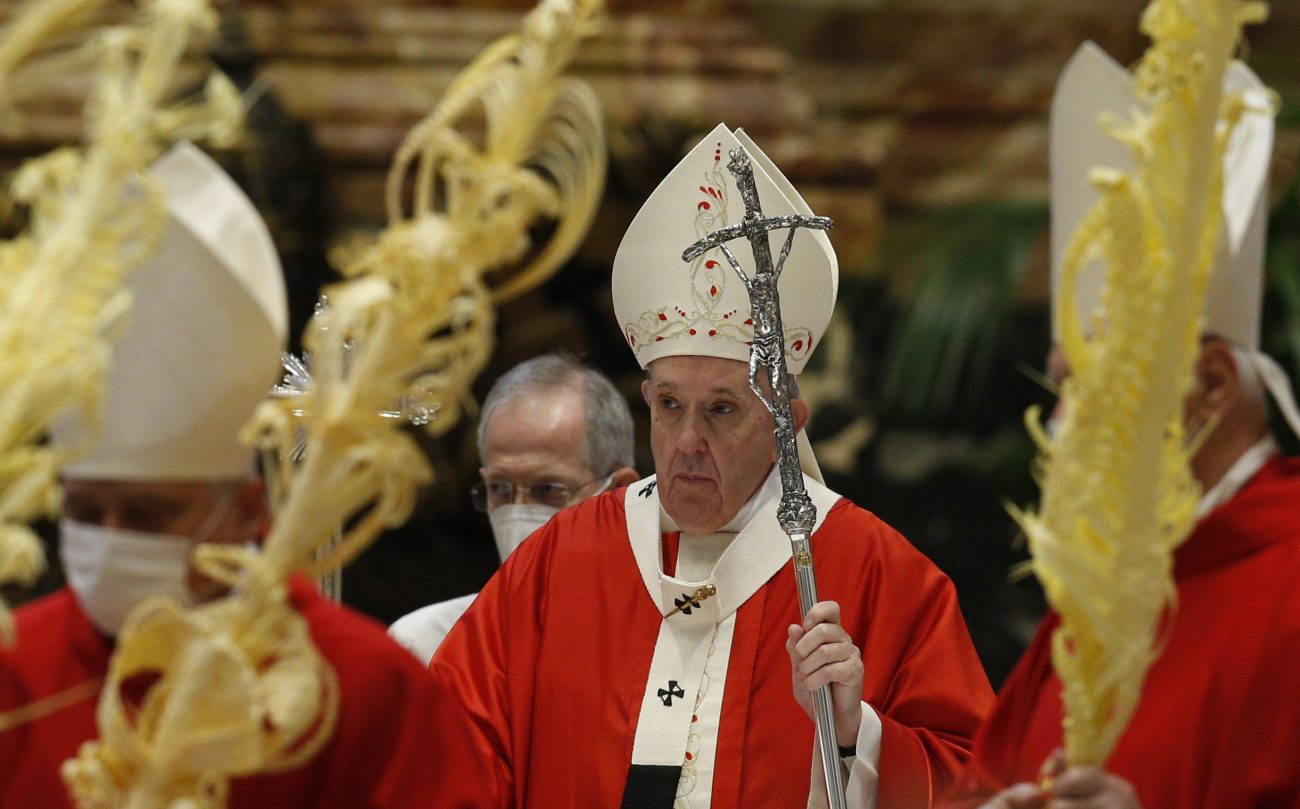 Pope Francis is pictured as cardinals walk in procession at the conclusion of Palm Sunday Mass in St. Peter's Basilica at the Vatican March 28, 2021. (CNS photo/Paul Haring)

VATICAN CITY (CNS) — A Christian life should be filled with amazement — astonishment at the son of God suffering and dying for humanity and awe at realizing how precious and loved people are in his eyes, Pope Francis said.

“Can we still be moved by God’s love? Have we lost the ability to be amazed by him?” the pope asked in his homily during Palm Sunday Mass, marking the start of Holy Week.

“Let us be amazed by Jesus so that we can start living again, for the grandeur of life lies not in possessions and promotions, but in realizing that we are loved and in experiencing the beauty of loving others,” he said at the Mass March 28.

Palm Sunday Mass, the liturgy that begins with a commemoration of Jesus entering Jerusalem among a jubilant crowd, began with a small procession toward the Altar of the Chair in St. Peter’s Basilica with a few dozen concelebrating cardinals and bishops walking ahead of Pope Francis.

Dressed in red vestments, the color of the Passion, they held large woven palm fronds while the reduced congregation of faithful were sitting distanced in the pews, wearing facemasks and holding small olive branches. Due to ongoing coronavirus restrictions, Holy Week and Easter celebrations at the Vatican were to be celebrated primarily in the basilica with a very small congregation.

Broadcast and livestreamed over a wide range of media, the pope preached in his homily about Holy Week marking an important time to be amazed by Jesus, who completely overturned people’s expectations.

Instead of being “a powerful liberator at Passover,” he arrives on a lowly donkey “to bring the Passover to fulfillment by sacrificing himself” and, instead of triumphing over the Romans by the sword, “Jesus comes to celebrate God’s triumph through the cross,” the pope said. 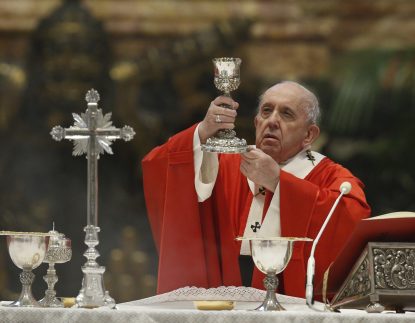 What is amazing, he said, “is the fact that he achieves glory through humiliation. He triumphs by accepting suffering and death, things that we, in our quest for admiration and success, would rather avoid.”

And even more astonishing is that he endures all this pain and humiliation “for us, to plumb the depths of our human experience, our entire existence, all our evil. To draw near to us and not abandon us in our suffering and our death. To redeem us, to save us,” the pope said.

With his love, sacrifice and salvation, “now we know that we are not alone: God is at our side in every affliction, in every fear; no evil, no sin will ever have the final word,” he said.

“Let us ask for the grace to be amazed,” he said, because not only is a Christian life without amazement “drab and dreary,” how can people proclaim “the joy of meeting Jesus, unless we are daily astonished and amazed by his love, which brings us forgiveness and the possibility of a new beginning?”

Pope Francis asked that people begin Holy Week with this sense of amazement, by gazing upon Jesus on the cross, and saying to him, “Lord, how much you love me! How precious I am to you!”

“With the grace of amazement we come to realize that in welcoming the dismissed and discarded, in drawing close to those ill-treated by life, we are loving Jesus. For that is where he is, in the least of our brothers and sisters, in the rejected and discarded,” the pope said.

After the Mass and before praying the Angelus, Pope Francis recalled this was the second Holy Week celebrated during the COVID-19 pandemic. While last year was experienced more as a shock, this year “it is more trying for us” and the economic crisis has become very burdensome.

The devil “is taking advantage of the crisis to disseminate distrust, desperation and discord,” he said, but Jesus is taking up the cross, taking “on the evil that this situation entails, the physical and psychological evil, and, above all, the spiritual evil.”

“What should we do?” he asked.

“She took upon herself her own portion of suffering, of darkness, of confusion, and she walked the way of the Passion keeping the lamp of faith lit in her heart. With God’s grace, we too can make that journey,” the pope said.

The pope also asked that people pray for all victims of violence, “especially those of this morning’s attack in Indonesia, in front of the cathedral of Makassar.”

At least 14 people were wounded in what police suspect was a suicide bomb attack outside the cathedral. As of March 28, no group had claimed responsibility for the bombing. 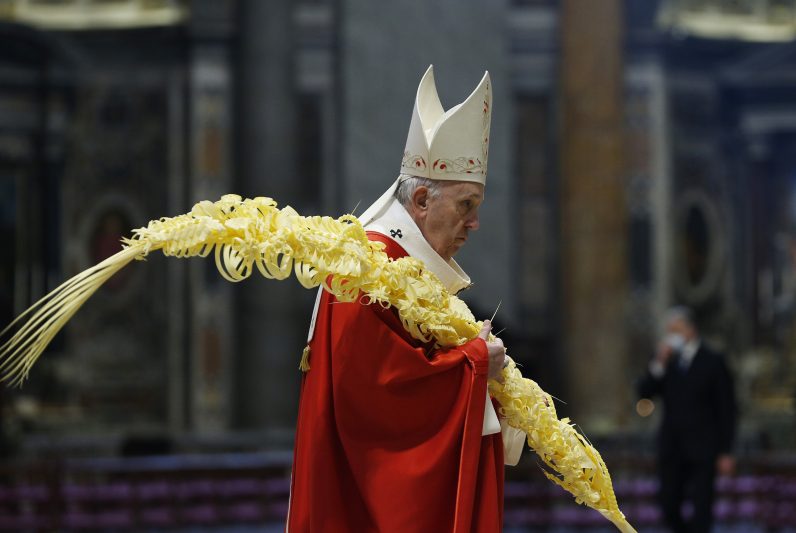