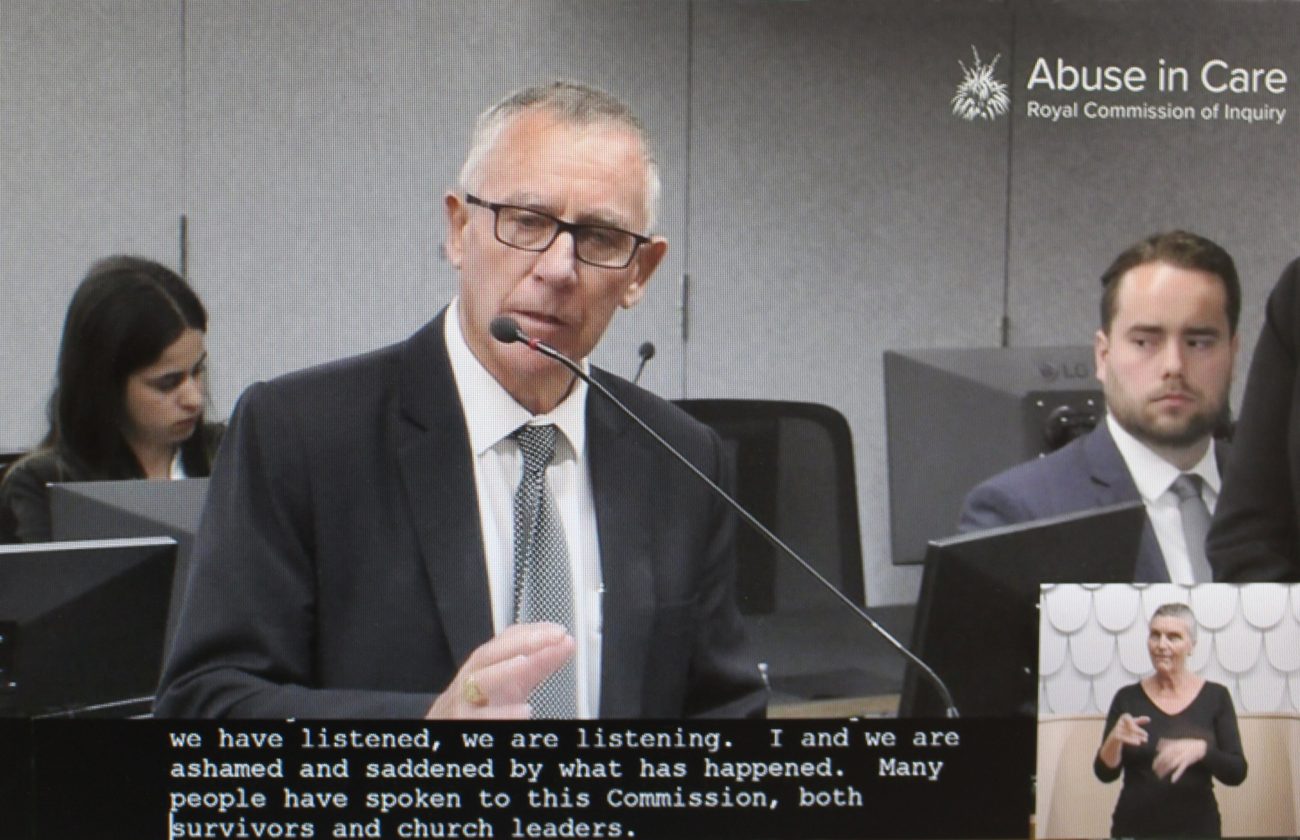 Cardinal John Dew of Wellington, New Zealand, is pictured in a screenshot speaking March 22, 2021, at a hearing of the New Zealand Royal Commission on Abuse in Care in Auckland. The royal commission directed that no attendees at public hearings should wear religious attire or uniforms, as that could be triggering for abuse survivors. (CNS screenshot/NZ Catholic)

AUCKLAND, New Zealand (CNS) — Cardinal John Dew told a royal commission of inquiry that the Catholic Church in New Zealand is ashamed and saddened that people suffered abuse while in its care.

The cardinal spoke during opening statements by the Catholic Church at the second phase of the Royal Commission of Inquiry into Abuse in Care’s hearing on redress in Auckland March 22.

“Our hope is that this commission will lead us and help us to be a better church — and that is a church (in which) this disgrace of abuse will be addressed, will cease, and our church will always be a church that gives life and hope. That’s our mission as a church.

“It is always to give life, the life that Christ offers us. We know that, in this, we still have much to learn.”

In preceding days, the hearing heard from representatives of the Salvation Army and the Anglican Church in New Zealand. Late last year, survivors of abuse in care in the three churches gave evidence in the first phase of the hearing. Similar hearings have been held on abuse in care in state institutions.

The redress hearing is one of several involving the Catholic Church in the overall royal commission, which is looking primarily at abuse from 1950 to 1999, although experiences outside these years may also be heard. Abuse being investigated includes sexual, physical, emotional, psychological abuse and neglect.

Cardinal Dew said he was grateful that the Catholic Church was being given the opportunity to engage in the hearing, “to continue our learning, and to learn with you.”

He greeted survivors present and said he wanted “to assure you that we have listened, and we are listening.”

“I and we are ashamed and saddened by what has happened.”

Cardinal Dew was dressed in a suit and tie while he addressed the hearing. The royal commission directed that no attendees at public hearings should wear religious attire or uniforms, as that could be triggering for survivors, “and survivor well-being is integral to the work of the inquiry.”

Speaking after Cardinal Dew, Sally McKechnie, counsel for Te Ropu Tautoko, a body set up by the New Zealand bishops and religious congregation leaders to liaise with the royal commission, noted that the cardinal would address the hearing again March 26.

“As Cardinal John will emphasize on Friday, the bishops and congregational leaders express their deep regret that any person has suffered harm while in the care of the Catholic Church when they should have been safe,” McKechnie said.

“The church recognizes that, collectively, there has been a failure — certain individuals have very obviously failed, and there is no question that how and why these failures occurred needs to be examined and remedied. The bishops and congregational leaders will continue to work to improve these redress processes so that all survivors who engage with the church are heard and supported,” she said.

Speaking before these statements, Katherine Anderson, counsel assisting the royal commission, said preliminary data indicated that “it’s very clear that the Catholic Church has received a significantly higher volume of disclosures of abuse than have the other faiths, including the Salvation Army and Anglican Church that you have heard from this week and last week.”

“The preliminary figure is in excess of 1,100 disclosures of abuse,” Anderson said.

Previous testimony indicated some 236 such disclosures in Salvation Army settings in New Zealand, and various estimates from individual Anglican bodies, including 53 claims of abuse in Auckland Anglican Diocese and up to 80 at Christ’s College in Christchurch.

The national leader of the Survivors Network of those Abused by Priests, Christopher Longhurst, told the hearing that SNAP is asking that “any redress process be survivor-focused and survivor-led.”

Longhurst added that SNAP “is asking that all redress processes be managed by a body that is totally and truly independent of the relevant faith-based institution.”

“To secure the trust and confidence of survivors, a secular statutory body must be set up to deal with redress,” he said. He also asked for proper compensation to facilitate people’s rehabilitation.

On March 23, the hearing was scheduled to hear from Dominican Father Tom Doyle, a U.S. canon lawyer. Representatives from the Marist Brothers, the Society of Mary and from the Catholic Church’s National Office for Professional Standards were also scheduled to speak at the hearing.

The New Zealand bishops and religious congregation leaders joined leaders from other denominations in seeking to have the church included in the work of the royal commission, which, when first established, was limited to inquiring into abuse in state care. It was announced that the terms of reference would be broadened in 2018.

The royal commission is to deliver its final report to the governor-general by 2023.

NEXT: Manila churches again lock down for Holy Week, reopen for Easter