Ministry to families must meet their real needs, pope says 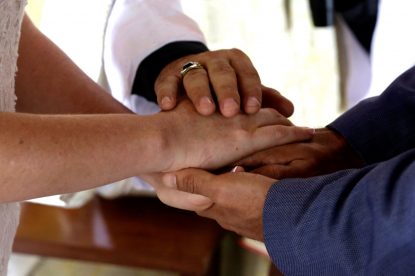 A priest blesses a couple during their wedding ceremony in 2018. In a March 19 message to a Rome conference, Pope Francis called for the church’s message on marriage to be given in a manner that is encouraging and accessible. (CNS photo/Juan Carlos Ulate, Reuters)

VATICAN CITY (CNS) — The Catholic Church cannot claim to safeguard marriage and family life if it simply repeats its traditional teaching without supporting, encouraging and caring for real families, especially when they struggle to live up to that teaching, Pope Francis said.

“It’s not enough to repeat the value and importance of doctrine if we don’t safeguard the beauty of the family and if we don’t compassionately take care of its fragility and its wounds,” the pope said March 19 in a message to a Rome conference marking the fifth anniversary of “Amoris Laetitia,” his 2016 exhortation of marriage and family life.

The conference, sponsored by the Dicastery for Laity, the Family and Life, the Diocese of Rome and the Pontifical John Paul II Theological Institute for the Sciences of Marriage and Family, kicked off celebrations of the “Amoris Laetitia Family Year,” which will conclude June 26, 2022, at the World Meeting of Families in Rome.

Pope Francis told conference participants, most of whom were watching online, that his exhortation was meant to give a starting point for a “journey encouraging a new pastoral approach to the family reality.”

“The frankness of the Gospel proclamation and the tenderness of accompaniment,” he said, must go hand in hand in the church’s pastoral approach.

The task of the church, the pope said, is to help couples and families understand “the authentic meaning of their union and their love” as a “sign and image of Trinitarian love and the alliance between Christ and his church.”

The church’s message, he said, “is a demanding word that aims to free human relationships from the slaveries that often disfigure them and render them instable: the dictatorship of emotions; the exaltation of the provisional, which discourages lifelong commitments; the predominance of individualism; (and) fear of the future.”

Marriage is a part of God’s plan for individuals, is the fruit of God’s grace and is a call “to be lived with totality, fidelity and gratuity,” the pope said. “This is the path so that relationships, even if they involve a journey marked by failures, falls and changes, open themselves to the fullness of joy.”

However, the pope told conference participants, that message of the church “cannot be and must never be given from on high and from outside.”

The church can proclaim the truth and assist families, he said, only by “immersing itself in real life, knowing up close the daily trials of spouses and parents, their problems and sufferings, all the small and large situations that weigh them down and, sometimes, block their journey.”

“A Gospel that proposed itself as doctrine fallen from on high and that did not enter into the ‘flesh’ of this daily life would risk remaining a beautiful theory and could be lived only as a moral obligation,” the pope said. But the Gospel is more than that, it is a way to proclaim to the world the love of God and the beauty of his plan for humanity.

“We are called to accompany, listen to and bless the journey of families, not only to show them the path, but to make the journey with them,” he said. The church and its ministers must “enter their homes with discretion and with love to say to couples, ‘The church is with you. The Lord is close to you. We want to help you safeguard the gift you have received.'”

While many modern people believe the importance of the traditional family has diminished, the pope said, the COVID-19 pandemic with its deaths, illnesses, lockdowns, job losses and fears have shown that for most people, the family is “the most solid reference point, the strongest support system and the irreplaceable basis for the defense of the whole human and social community.”

“Therefore, let us support the family,” he said. “Let us defend it from that which would compromise its beauty. Let us draw near to this mystery of love with awe, with discretion and with tenderness.”