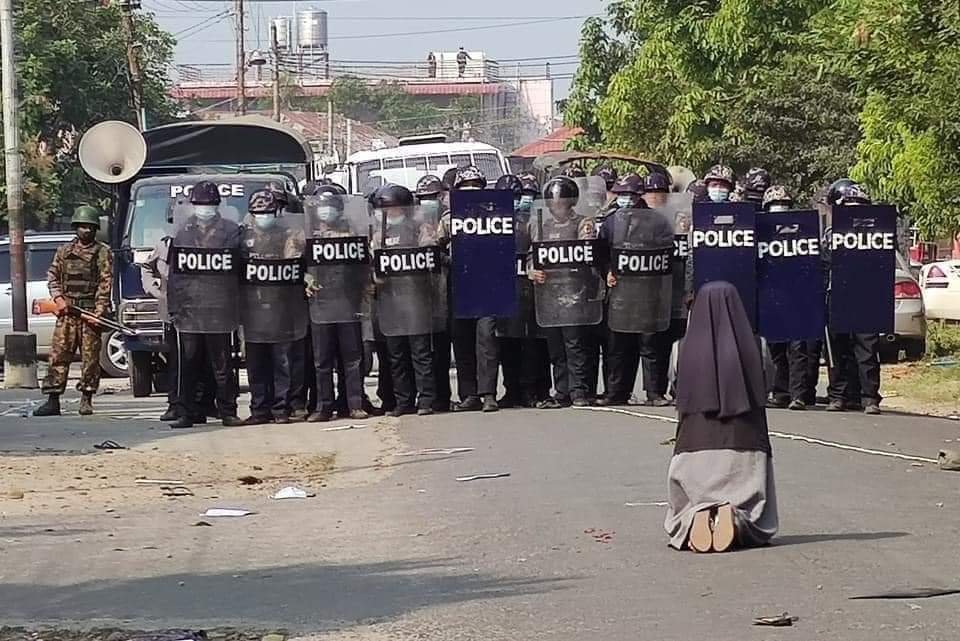 Sister Ann Nu Thawng, a member of the Sisters of St. Francis Xavier, kneels in front of police and soldiers during an anti-coup protest in Myitkyina, Myanmar, Feb. 28, 2021. On a day when 18 anti-coup protesters were shot dead, media reported that Sister Thawng implored troops to not shoot civilians and that her actions protected protesters. (CNS photo/courtesy Myitkyina News Journal)

VATICAN CITY (CNS) — Pope Francis appealed for an end to deadly violence against protesters in Myanmar, calling on the military junta to free political prisoners and let dialogue and the journey toward democracy prevail.

Appealing to those now ruling the nation — the government was overthrown in a military coup Feb. 1 — the pope asked March 3 that “dialogue prevail over repression and harmony over discord.”

He also launched an appeal to the international community, asking that they work to ensure that “the aspirations of the people of Myanmar are not stifled by violence.”

When Myanmar’s military took control of the country, it arrested political leaders and activists, including State Counselor Aung San Suu Kyi and President Win Myint. Citizens have taken to the streets to protest in cities throughout the country, and military response has been increasingly violent.

Many of Myanmar’s journalists have gone into hiding, but international media reported the military shot and killed at least 13 protesters March 3.

(See a related story on the protests and a religious sister’s intervention in the violence.)

Pope Francis asked that “young people of that beloved land be granted the hope of a future where hatred and injustice make way for encounter and reconciliation.”

He repeated an appeal made one month ago, that “the journey toward democracy taken in recent years by Myanmar may be resumed through the concrete gesture of the release of various imprisoned political leaders.”

The previous day, Bishop David J. Malloy of Rockford, Illinois, chairman of the U.S. Conference of Catholic Bishops’ Committee on International Justice and Peace, expressed solidarity with the people of Myanmar and echoed Pope Francis’ earlier call for dialogue.

Bishop Malloy said he wrote the bishops’ conference in Myanmar to express solidarity and asked U.S. government officials “to carefully consider the insights the local church can offer toward achieving a just resolution to the current crisis.”

“As protests continue in Myanmar, I call on all Catholics and people of goodwill to pray for the people and leaders of this land.”

NEXT: ‘Finally,’ pope says he will be able to make pilgrimage to Iraq