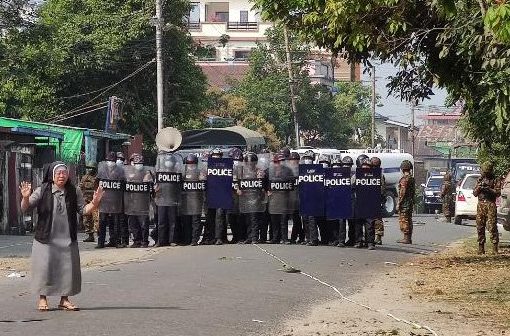 Sister Ann Nu Thawng, a member of the Sisters of St. Francis Xavier, reacts in front of police and soldiers during an anti-coup protest in Myitkyina, Myanmar, Feb. 28, 2021. On a day when 18 anti-coup protesters were shot dead, media reported that Sister Thawng implored troops to not shoot civilians and that her actions protected protesters. (CNS photo/courtesy Myitkyina News Journal)

YANGON, Myanmar (CNS) — Cardinal Charles Bo of Yangon called for patience and tolerance on a day when at least 18 anti-coup protesters were shot dead by Myanmar security forces.

Media reported Sister Ann Nu Thawng, a member of the Sisters of St. Francis Xavier, stood in front of troops Feb. 28, the bloodiest day since the Feb. 1 military coup.

Eyewitnesses said she got on her knees, raised her hands toward heaven and implored: “Don’t shoot, don’t kill the innocent. If you want, hit me.” Her actions shocked the agents, who did not shoot and stopped their advance.

“Today, the riot has been severe nationwide,” said a tweet on @CardinalMaungBo, an unofficial account with a web link to the Archdiocese of Yangon. “The police are arresting, beating and even shooting at the people. With (eyes) full of tears, Sr. Ann Nu Thawng begs & halts the police to stop arresting the protesters.” The tweet said about 100 protesters escaped from police because of the nun.

In a homily earlier, Cardinal Bo said the streets of Myanmar have seen so much pain, suffering and resistance, reported ucanews.com.

“Let us all believe in the power of love and reconciliation,” Cardinal Bo said in his homily. “We are all sons and daughters of the same land, same mother Myanmar, and we need to exercise patience and tolerance.

“If you want to be a leader, you must serve. Service is the greatest power, not guns. Make peace our destiny, not conflict. Arms are useless. Rearm ourselves with reconciliation and dialogue.”

(See a related story on Pope Francis’ appeal for peace in Myanmar.)

Ucanews.com reported hundreds of Catholic laypeople joined by priests and nuns marched in Mandalay Feb. 28, saying the rosary and calling for a peaceful solution to the crisis.

The U.N. rights office said at least 18 people were killed and more than 30 wounded. Some media reported that as many as 26 died. Tear gas also reportedly was used in various locations as well as flash-bang and stun grenades.

The intensive crackdown has drawn strong condemnation from the United Nations, the European Union and other countries, including the U.S.

Ravina Shamdasani, U.N. spokeswoman, said: “We strongly condemn the escalating violence against protests in Myanmar and call on the military to immediately halt the use of force against peaceful protesters.”

Tom Andrews, the U.N. special rapporteur on human rights in Myanmar, said it was clear the junta’s assault would continue, so the international community needed to ratchet up its response.

“Words of condemnation are welcome but insufficient. We must act,” he said.

The assault on peaceful protests came two days after Myanmar’s envoy to the U.N. departed from prepared remarks in a rare speech against the military regime and called for international action to help reverse the coup.

Kyaw Moe Tun urged the U.N. Security Council and the world to use “any means necessary to rescue the people of Myanmar and hold the military to account.”

Despite the crackdown, hundreds of protesters continued to hold peaceful protests, defying the junta’s order, in Yangon and Mandalay March 1.

Myanmar has been in political turmoil since the army seized power and detained elected civilian leader Aung San Suu Kyi after alleging fraud in the November 2020 election her National League for Democracy party won by a landslide.

The impoverished nation, which was ruled by the military for more than five decades, has seen daily protests following the coup that abruptly ended a 10-year experiment with democracy. 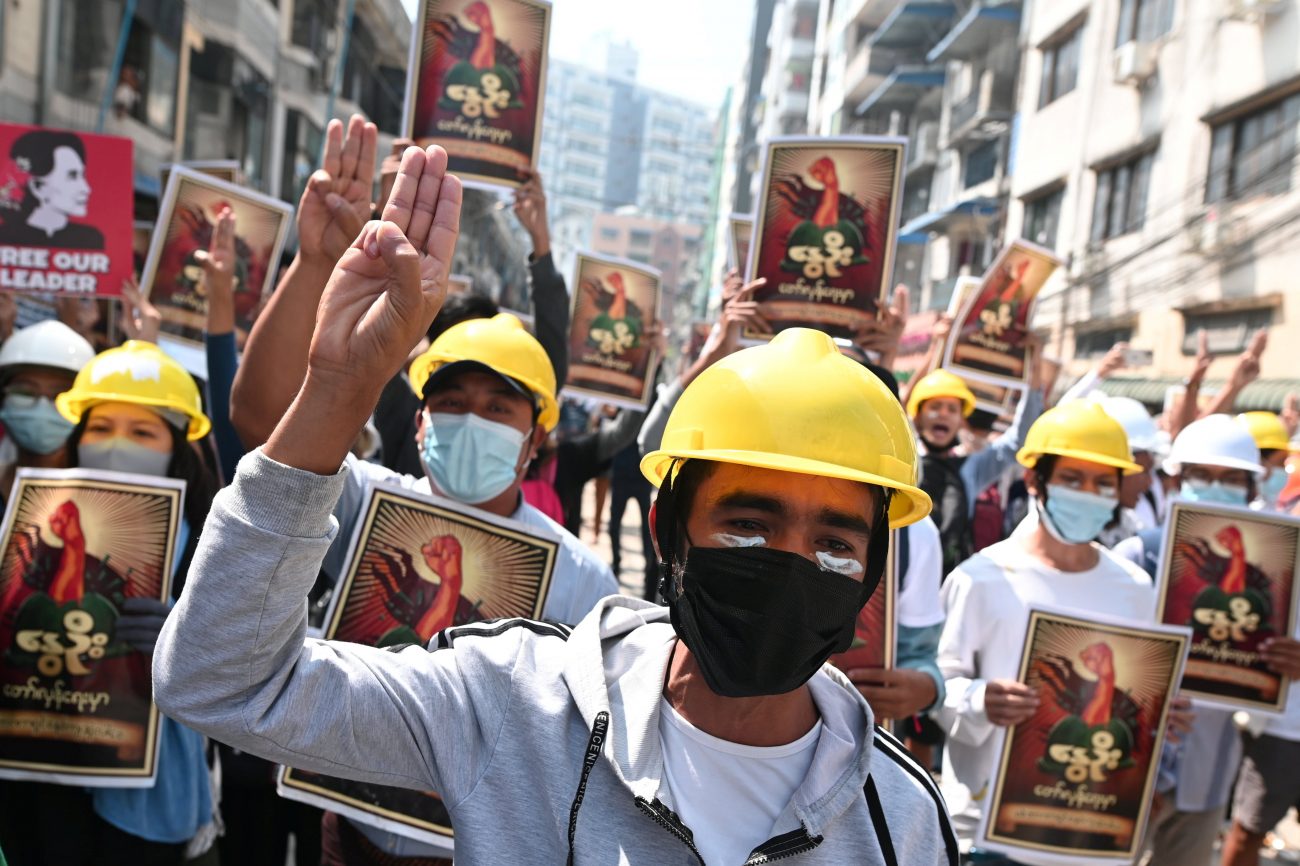 Demonstrators flash the three-finger salute March 1, 2021, during a protest against the military coup in Yangon, Myanmar. (CNS photo/Reuters)

NEXT: With Lebanon on verge of collapse, thousands rally to support cardinal