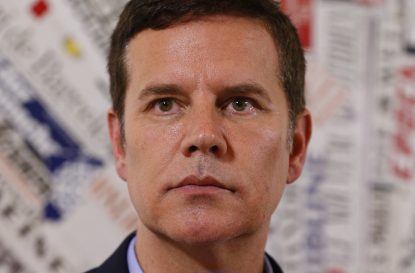 Chilean clerical sex abuse survivor Juan Carlos Cruz attends a news conference at the Foreign Press Association building in Rome in this May 2, 2018, file photo. Pope Francis has appointed Cruz to the Pontifical Commission for the Protection of Minors. (CNS photo/Paul Haring)

VATICAN CITY (CNS) — Pope Francis has named Juan Carlos Cruz, a survivor of sexual abuse by a notorious Chilean priest, to be a member of the Pontifical Commission for the Protection of Minors.

Cruz, James Hamilton and José Andrés Murillo, all victims of then-Father Fernando Karadima, met with Pope Francis in 2018, several weeks after the pope wrote a letter in which he said he had been mistaken in his initial assessment of the situation in Chile and asking forgiveness of the survivors and others he offended.

In a tweet after the appointment was announced, Cruz thanked the pope and said the assignment “renews my commitment to continue working to end the scourge of abuse and for so many survivors who still do not have justice.”

The Vatican announced the appointment March 24 and said Pope Francis also had extended by one year the three-year terms of 15 commission members but made no mention of the terms of the commission president, Cardinal Sean P. O’Malley of Boston, nor the group’s secretary, Msgr. Robert Oliver.

Terrence Donilon, secretary for communications at Archdiocese of Boston, told Catholic News Service that Msgr. Oliver, a priest of the archdiocese, “will be completing his service with the Pontifical Commission for the Protection of Minors and returning home to the archdiocese.”

Cardinal O’Malley, he said, “is working with the Council of Cardinals to create a new structure, which includes establishing it as a new office within the Holy See. In the meantime, the term limits of the commission members had expired and will be extended for a year.”

As for the cardinal’s role, Donilon said, “Cardinal Sean serves as president of the commission at the pleasure of the Holy Father.”

The members whose terms were renewed are: Benyam Dawit Mezmur, an Ethiopian who was chair of the U.N. Committee on the Rights of the Child in 2015-17; Indian Sister Arina Gonsalves, a certified counselor and consultant on abuse cases; Neville Owen, a judge and former chair of the Australian Catholic Church’s Truth, Justice and Healing Council; Sinalelea Fe’ao, chief education officer for the Diocese of Tonga and Niue; and Myriam Wijlens, a canon law professor from the Netherlands.

Also: Ernesto Caffo, an Italian professor of child and adolescent psychiatry and member of the board of directors of the International Center for Missing and Exploited Children; Sister Jane Bertelsen, a member of the Franciscan Missionaries of the Divine Motherhood, who has worked for 20 years in developing child-protection policies in Australia and England; Teresa Kettelkamp, former executive director of the U.S. Conference of Catholic Bishops’ Secretariat of Child and Youth Protection; and Nelson Giovanelli Dos Santos, the Brazilian co-founder of the Fazenda da Esperanca and an expert in the rehabilitation of youth.

And, finally: Jesuit Father Hans Zollner, director of the Center for Child Protection at Rome’s Pontifical Gregorian University; Gabriel Dy-Liacco, a psychotherapist from the Philippines; Auxiliary Bishop Luis Manuel Ali Herrera of Bogota, Colombia; Hannah Suchocka, professor of law and former prime minister of Poland; Sister of Charity Kayula Lesa of Zambia, who has worked with refugees and in the prevention of human trafficking; and Precious Blood Sister Hermenegild Makoro, former secretary-general of the Southern African Catholic Bishops Conference.

Pope Francis formally established the pontifical commission in March 2014. The body of experts, with input from survivors, is meant to make proposals and spearhead initiatives to improve safeguarding norms and procedures. It remains an advisory body for the pope, and it offers concrete assistance to every level of the church worldwide.

PREVIOUS: Dante a ‘prophet of hope’ for the world, pope says