Dante a ‘prophet of hope’ for the world, pope says 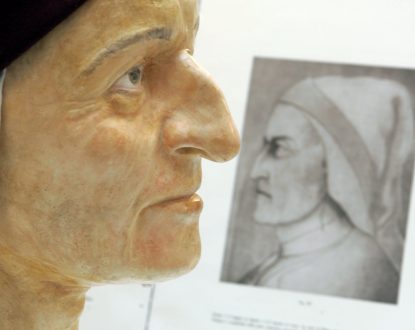 A bust of Italian poet Dante Alighieri is seen next to an etching of him at the University of Bologna in Ravenna, Italy, in this January 16, 2007, file photo. In a March 25 apostolic letter commemorating the 700th anniversary of Dante’s death, Pope Francis praised the famed Italian poet’s life and work. (CNS photo/Marco Bucco, Reuters)

VATICAN CITY (CNS) — The life and works of the famed Italian poet Dante Alighieri remain a lasting treasure that embodies the virtue of hope so desperately needed in today’s world, Pope Francis said.

In an apostolic letter commemorating the 700th anniversary of Dante’s death, the pope said he appreciated the Catholic poet’s work for the “enduring warnings and insights it contains for humanity as a whole, not simply believers.”

“Dante’s work is an integral part of our culture, taking us back to the Christian roots of Europe and the West,” he said. “It embodies that patrimony of ideals and values that the church and civil society continue to propose as the basis of a humane social order in which all can and must see others as brothers and sisters.”

The apostolic letter was published by the Vatican March 25 to coincide with Italy’s celebration of Dante Day. According to the Italian news agency ANSA, scholars believed that on that date, the Italian poet began his allegorical journey through hell, purgatory and heaven, chronicled in the “Divine Comedy.”

Born in Florence in 1265, Dante played an essential role in Italian literature by writing in the vernacular, not Latin, making literature more accessible to the wider public.

His final work was the “Divine Comedy” which is considered one of the masterpieces of world literature. It was completed while he was in exile in Ravenna, where he died Sept. 14, 1321, the feast of the Exaltation of the Cross.

In his apostolic letter, the pope noted that the Dante Day celebration coincided with the feast of the Annunciation which “held a special place in the life and work of the supreme poet Dante Alighieri, a prophet of hope and a witness to the innate yearning for the infinite present in the human heart.”

Popes in the modern age, such as Pope Benedict XV, St. Paul VI, St. John Paul II and retired Pope Benedict XVI recognized the cultural and artistic importance of Dante’s work as well as the “intimate union of Dante with this chair of Peter,” he said.

The pope said that despite tragic moments in Dante’s life, such as his exile in Ravenna, “the great poet never surrendered or succumbed” but instead found his true calling.

“Reviewing the events of his life above all in the light of faith, Dante discovered his personal vocation and mission. From this, paradoxically, he emerged no longer an apparent failure, a sinner, disillusioned and demoralized, but a prophet of hope,” he said.

Pope Francis said that Dante’s use of the vernacular in his writings elevated the language of the people to a universal language” that conveys an important message that is meant to “touch our hearts and minds, to transform and change us even now, in this present life.

“Dante was a man of his time, with sensibilities different from ours in certain areas, yet his humanism remains timely and relevant, a sure reference point for what we hope to accomplish in our own day,” the pope said.