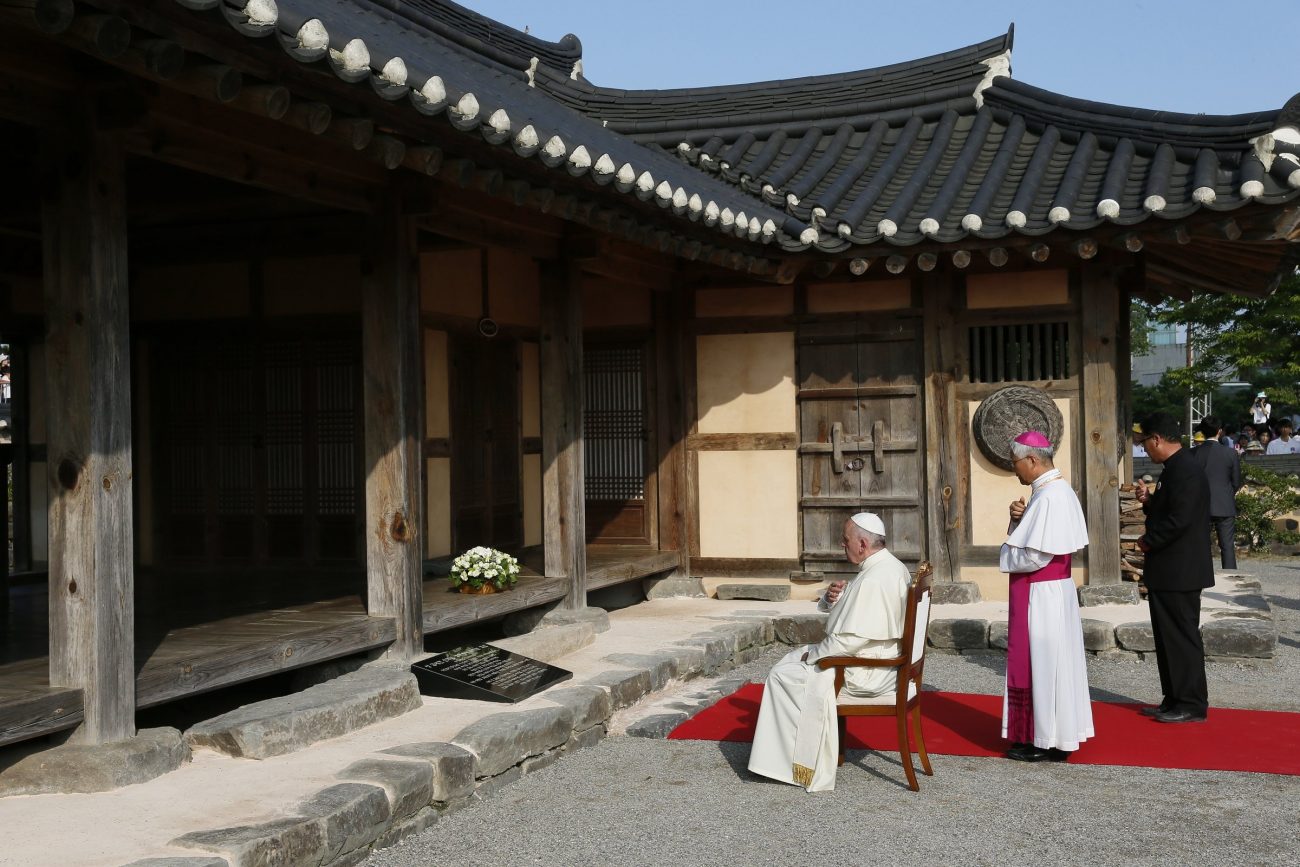 Pope Francis prays in front of the birthplace of St. Andrew Kim Taegon, the first Korean-born Catholic priest, at the Sanctuary of Solmoe in South Korea Aug. 15, 2014. A radio drama on St. Andrew Kim, the patron saint of South Korea, has become widely popular among Catholics in the country. (CNS photo/Paul Haring)

The drama based on the life, works and thoughts of St. Andrew Kim, Korea’s first native-born Catholic priest, is a tribute marking the 200th anniversary of the birth of the saint from the Diocese of Daejeon, ucanews.com reported.

The South Korean church in November officially kicked off nationwide bicentennial celebrations of the birth of one of the nation’s most revered Christian martyrs.

Daejeon’s Catholic Peace Broadcasting Center, led by Father Paul Baek Hyun, scripted the drama that went on air Feb. 22 and will run through April 3. The 30-espisode show is broadcast twice daily except Sunday.

The topics of the drama touch on traditional issues, such as the formation of adults and contemporary discussions such as connecting with artificial intelligence and dialogue between the past and the present ranging over two centuries.

Father Baek Hyun said the drama has received enthusiastic responses from listeners, and Catholic parishes have been using the drama as a way of “maturing in faith.”

Listeners have written letters and messages to the broadcasting center expressing their appreciation of the drama, the priest added.

While parishes have been using the drama for faith formation, it also is being used for Sunday school lessons.

The church has been arranging several yearlong programs and activities to mark the saint’s birth that will run until Nov. 27. Special Masses, exhibitions, walking pilgrimages and visits to Catholic shrines are among notable programs at national and diocesan levels.

According to Franciscan Media, St. Andrew Kim was the son of Christian converts. Following his baptism at the age of 15, he traveled to a seminary in Macau, China, and returned to his homeland after six years through Manchuria. The same year, he crossed the Yellow Sea to Shanghai, where he was ordained a priest.

Back home again, he was assigned to arrange for more missionaries to enter by a coastal route that would elude border patrols. He was arrested, tortured and beheaded by the Han River near Seoul in 1846.

The saint’s father, Ignatius Kim Che-Jun, was martyred during the persecution of 1839.

Christianity came to the Korean peninsula during the Japanese invasion in 1592 when some Koreans were baptized, probably by Christian Japanese soldiers. It then started as an indigenous lay movement.

However, the Catholic Church faced major difficulties in evangelization as the ruling dynasty refused all contact with the outside world except for taking taxes to Beijing annually. Dozens of Christian men and women, including clergy, were martyred for refusing to denounce their faith.

In 1984, during his visit to South Korea, St. John Paul II canonized 103 martyrs, including Andrew Kim, Kim’s father, Paul Chong Hasang, a lay apostle martyred in 1839, and seven French missionaries who also were martyred in the 19th century.

About 46% of South Koreans adhere to no religion while 29% are Christians and 23% are Buddhists in a population of about 51.8 million, according to Pew Research Center.

While Protestants make up the majority, the Catholic Church also has a significant following, estimated to be 11% of the population or about 5.6 million people.

NEXT: Iraq visit was ‘sign of hope’ for suffering people, pope says