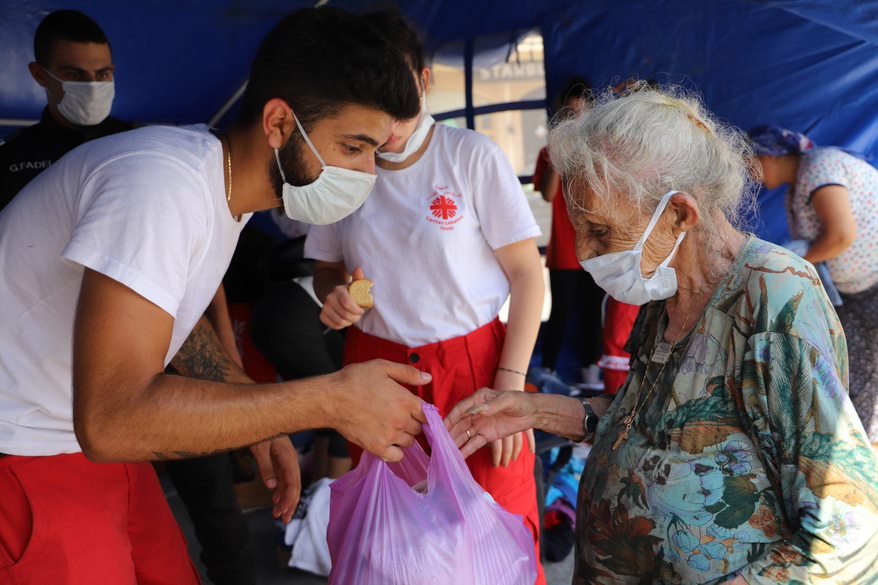 Caritas Youth volunteers are pictured in an undated photo distributing clothing in the aftermath of the Aug. 4, 2020, Beirut blast. The head of Caritas in Lebanon says people used to donate. "Now, in despair, they are coming to ask for help." (CNS photo/Caritas Lebanon)

BEIRUT (CNS) — Lebanon is facing a “virus of crises.”

In the throes of a collapsing economy exacerbated by the coronavirus pandemic and devastation from the catastrophic Beirut port blast last August, Lebanon is sinking further into a dire situation.

“Now we have the ‘new’ poor,” Carmelite Father Michel Abboud, president of Caritas Lebanon said of the rapidly rising segment of the country’s population. “So many people have lost their jobs. Before, they came to us to donate. Now, in despair, they are coming to ask for help.”

The Lebanese currency has lost nearly 90% of its value over the past 18 months, driving more than half of the population below the poverty line. A wage equal to $1,000 is now worth less than $100, and inflation is skyrocketing.

“The majority of families repeat the same expression to us: ‘Our lives have changed. We were well-to-do, now we are poor,'” he said. “It’s a tragedy.”

The currency devaluation has caused hyperinflation, such that basic foods have become unaffordable for the previously middle class.

Recently, Caritas Lebanon received a donation of 10,000 hygiene kits for families to cope with the coronavirus, each consisting of face masks, hand gel and disposable gloves.

Soon after the distribution was announced, thousands of people lined up around the Caritas headquarters building.

“It’s a sign for us, how much people are in need,” the Caritas president said of the demand for the kits, each valued at around $20.

Steered by corruption and mismanagement for decades, Lebanon is a country with an absent government, literally and figuratively. The previous government resigned after the August blast and a new Cabinet has not been formed due to political infighting.

“It is a country stolen by the politicians. The government is not doing its job of helping the people. So, Caritas and other organizations are doing the government’s job,” Father Abboud pointed out.

Many of the newly poor beneficiaries confide to the Caritas priest: “We aren’t used to asking for help. It’s not easy for us to come to Caritas to ask for help.”

“I tell them, ‘Don’t be ashamed. Caritas is the intermediary between God and you, because God put in the heart of the donors to give,'” Father Abboud said.

Founded in 1972, Caritas Lebanon is a member of Caritas Internationalis, one of the largest humanitarian networks in the world, and is under the direction of the Council of Catholic Patriarchs and Bishops in Lebanon.

In addition to providing social services and assistance, including hot meals and food packages, Caritas provides health care through its 10 centers and eight mobile medical units.

In February, Caritas Lebanon launched its annual fundraising campaign under the theme “Together For a Better Life” at Bkerke, the Maronite patriarchate north of Beirut. In his homily, Cardinal Bechara Rai, Maronite patriarch, noted that Caritas “provides exceptional aid.”

As he begins his second year as president of Caritas Lebanon, Father Abboud stressed: “The challenge for us is funds. We give what we receive. But as the number of needy families increases, our donations should also increase.”

“What matters is for the poor to live with dignity,” he added.

Cardinal Rai commended the more than 1,000 Caritas Youth volunteers in particular for their response to the Beirut blast, noting that they were “at the forefront of arriving to the affected areas, transporting the injured to hospitals, and contributing to cleaning buildings and streets from the blast debris, and in distributing social, in-kind, food and financial aid to repair damaged homes.”

One of the largest nonnuclear explosions in global history, the blast killed more than 200 people and wounded thousands, leaving around 300,000 people homeless. It was caused by the detonation of a stockpile of ammonium nitrate that had been stored improperly at the port for years.

Caritas Lebanon helped more than 52,000 people in the aftermath of the blast. Assistance included providing nearly 47,000 different medical services and distribution of more than 184,000 units of food, both hot meals and food parcels. To date, Caritas has repaired 826 damaged houses and 66 shops.

Meeting traumatized, desolate families following the blast, Father Abboud was repeatedly asked the same question: “Why did God do this to us?”

“Every time, I answer: ‘Even though you lost your house and your material possessions, don’t lose your faith. God is with you,'” the priest recounted.

The psychological and emotional wounds in the aftermath of the blast run deep.

Father Abboud told of meeting with a couple who told him, “We feel like we’ve killed our daughter.” Their daughter had wanted to leave Lebanon two years earlier to pursue work opportunities in Canada, but her parents were against her plan. So, she remained in Lebanon and was one of the victims in the blast. In their anguish, the parents blame themselves for their daughter’s death.

“Honestly, the situations we encounter and the suffering people we meet now, we can’t help but have teary eyes,” Father Abboud said. 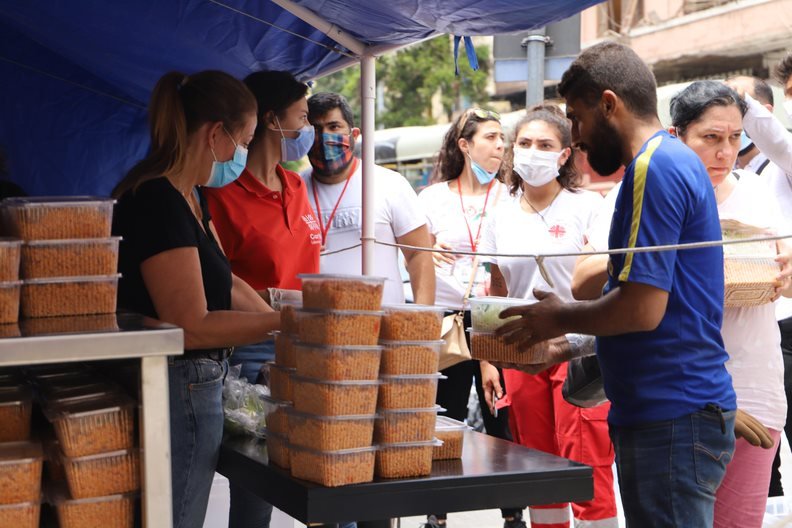 Caritas Youth are pictured in an undated photo providing hot meals in the aftermath of the Aug. 4, 2020 Beirut, blast. The head of Caritas in Lebanon says people used to donate. “Now, in despair, they are coming to ask for help.” (CNS photo/Caritas Lebanon)

NEXT: Brazilians ‘need vaccines now,’ says document by bishops, others