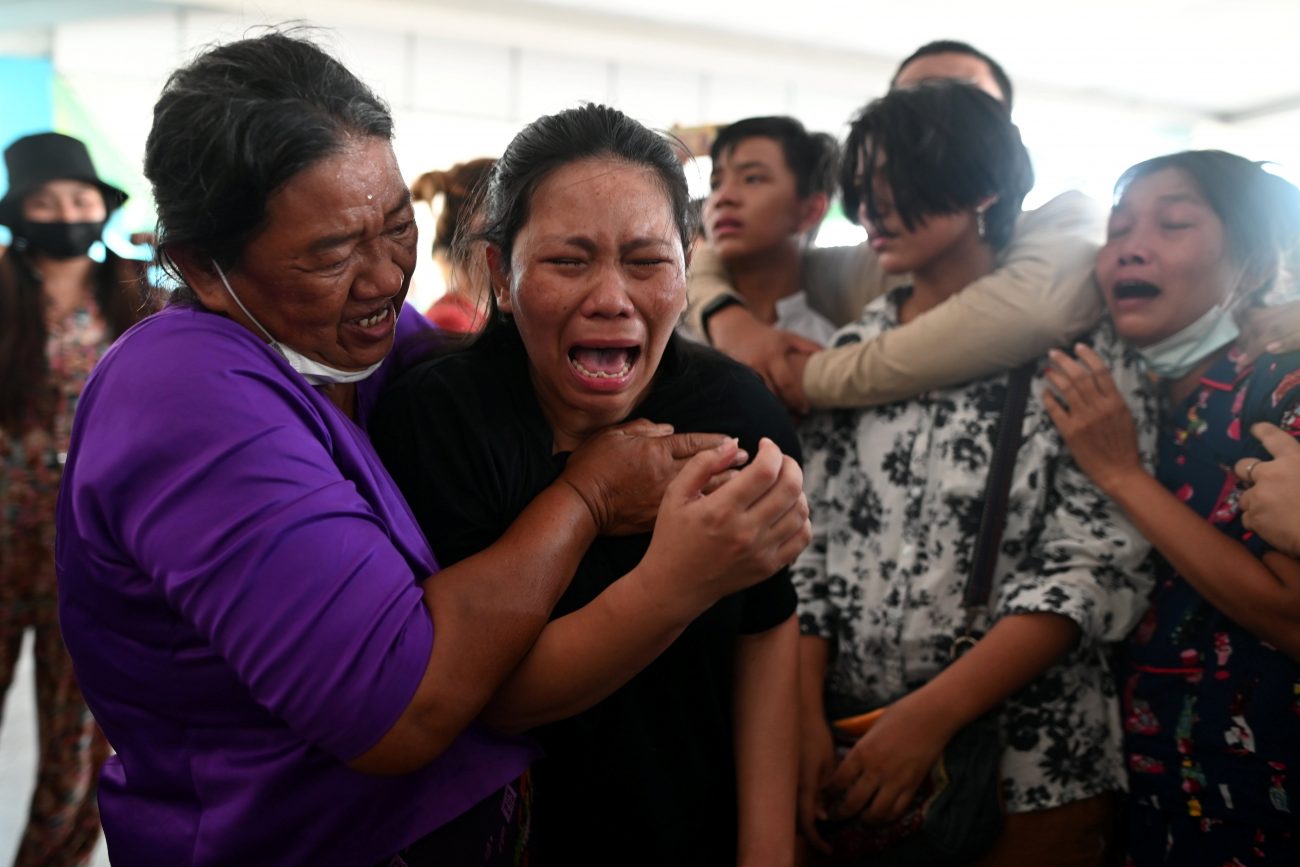 Relatives cry over the body of Min Khant Soe in Yangon, Myanmar, March 15, 2021. Khant Soe was shot and killed during the security force crack down on anti-coup protesters in Yangon. (CNS photo/Reuters) 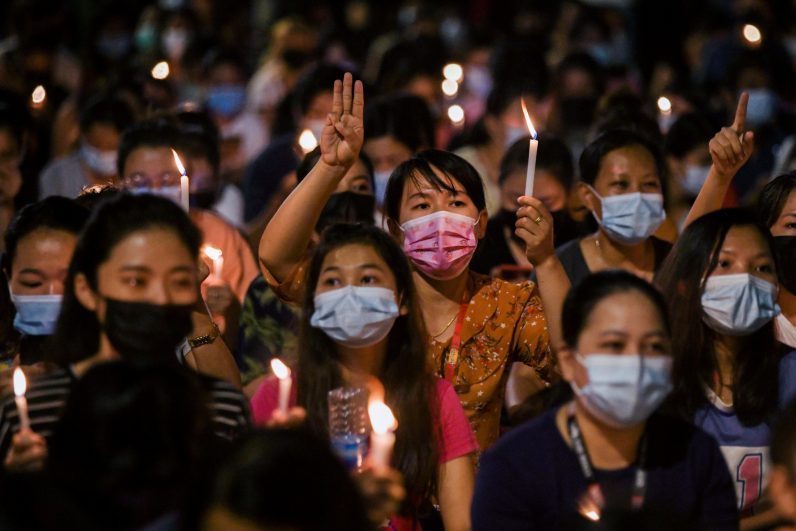 YANGON, Myanmar (CNS) — The United Nations and human rights groups have strongly condemned the worsening bloodshed in Myanmar as at least 38 people were killed in the military’s crackdown on protesters March 14.

The same day, the military rulers declared martial law in parts of Yangon, the nation’s largest city. March 14 was the Global Day of Prayer for Myanmar.

Christine Schraner Burgener, the U.N. special envoy on Myanmar, strongly condemned the violence as the military defied international calls, including from the U.N. Security Council, for restraint, dialogue and full respect for human rights and fundamental freedoms.

“The ongoing brutality, including against medical personnel and destruction of public infrastructure, severely undermines any prospects for peace and stability,” she said in a statement March 14. “The international community, including regional actors, must come together in solidarity with the people of Myanmar and their democratic aspirations.”

She said she had heard from contacts in Myanmar heartbreaking accounts of killings, mistreatment of demonstrators and torture of prisoners over the weekend. Mobile data was cut off nationwide at 1 a.m. March 15.

Four days earlier, Thomas Andrews, U.N. special rapporteur on the situation of human rights in Myanmar, said: “As of this moment, credible reports indicate that Myanmar security forces had murdered at least 70 people.”

By March 15, that number had climbed past 125, according to Yangon-based rights group Assistance Association for Political Prisoners. 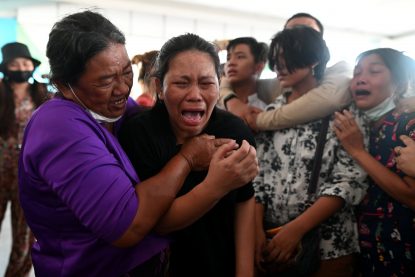 Relatives cry over the body of Min Khant Soe in Yangon, Myanmar, March 15, 2021. Khant Soe was shot and killed during the security force crack down on anti-coup protesters in Yangon. (CNS photo/Reuters)

In a video message to an online prayer service March 14, Yangon Cardinal Charles Bo said the Feb. 1 military coup and the ensuing crackdown plunged Myanmar into “yet another chapter of darkness, bloodshed and repression.” A “decade of reform and opening” has been replaced by a return to “the nightmare of military repression, brutality, violence and dictatorship.”

Ucanews.com reported Cardinal Bo praised “the amazing courage, commitment and creativity of our people, demonstrating throughout the country in their thousands for many days.”

“They have shown their determination not to allow their hard-won democracy and freedoms, their hopes of peace, to be stolen from them. It was a beautiful sight to see and a great inspiration. The sense of unity and solidarity in diversity — with people of different ethnicities and religions coming together for the same cause — was remarkable. But that was met with bullets, beatings, bloodshed and grief. So many have been killed or wounded in our streets, and so many thousands have been arrested and disappeared.”

“We will pray and work for a new Myanmar to be born out of this current tragedy, a Myanmar where truly every human being has an equal stake in the country and equal rights to basic freedoms, a Myanmar where ethnic and religious diversity is celebrated and where we enjoy real peace, a Myanmar where the soldiers put down their guns, step back from power and do what an army is meant to do: defend rather than attack the people. … A Myanmar that rises again from the ashes. How do we get there? By faith, prayer, love, dialogue and courage. By speaking out for truth, justice, freedom, peace and democracy.”

The Chinese Embassy in Myanmar said several Chinese-funded factories were set ablaze in Yangon’s industrial zone and Chinese citizens were injured. Ucanews.com reported that the embassy urged Myanmar to take further action to stop all acts of violence, punish the perpetrators and ensure the safety of life and property of Chinese companies and personnel in Myanmar. Ucanews.com reported it was in response that the military began imposing martial law in townships.

Protesters have been suspicious of China’s role behind the military coup, with frequent demonstrations targeting the Chinese embassy in Yangon. Activists have launched a campaign to boycott Chinese-made products and foods.

Amnesty International’s Crisis Evidence Lab examined more than 50 videos of protests and was able to confirm that security forces appear to be implementing planned, systematic strategies including the ramped-up use of lethal force.

“Footage clearly shows that Myanmar military troops — also known as the Tatmadaw — are increasingly armed with weapons that are only appropriate for the battlefield, not for policing actions,” Amnesty International said on Thursday. “Officers are frequently seen engaging in reckless behavior, including the indiscriminate spraying of live ammunition in urban areas.”

The 55 clips analyzed by Amnesty International were filmed by the media and members of the public during demonstrations across Myanmar from Feb. 28 to March 8.

In a video from March 3 in Yangon’s North Okkalapa township, a man appears to be in the custody of security forces when an officer beside him suddenly shoots him. He immediately drops to the ground and is left on the road, before officers walk back and drag him away.

“These are not the actions of overwhelmed, individual officers making poor decisions,” said Joanne Mariner, director of crisis response at Amnesty International. “These are unrepentant commanders already implicated in crimes against humanity, deploying their troops and murderous methods in the open.”

Amnesty International said state-run media quoted military authorities on March 5 as denying any role in fatalities, claiming that “unscrupulous persons (might be) behind these cases.” 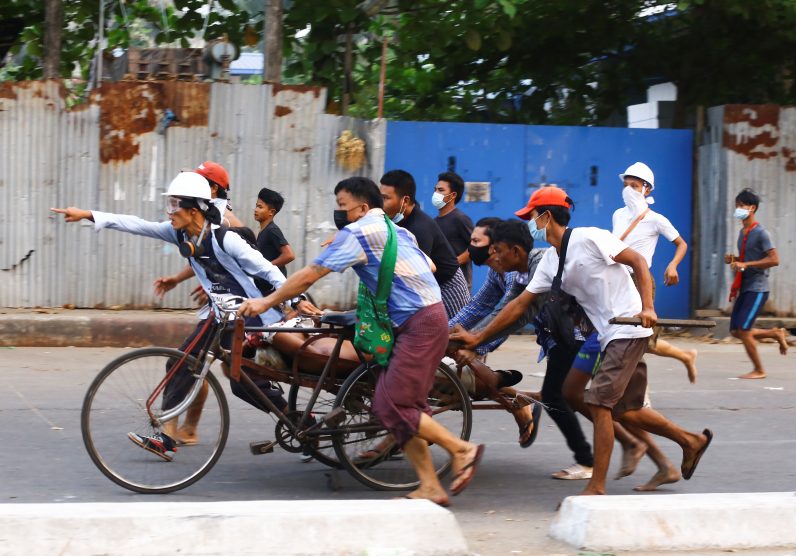 People transport a person who was shot during a security force crackdown on anti-coup protesters in Yangon, Myanmar, March 14, 2021. (CNS photo/Reuters)

NEXT: Polish cardinal could face jail time for failing to report abuse